Oricom is an award winner when it comes to baby monitors. This Australian company has been providing parents the peace of mind that their baby is under a watchful ear and eye whilst they are in a separate room.

However, with reports about the ability that hackers have to exploit baby monitor devices many parents may be wondering if their Oricom baby monitors are vulnerable.

Here’s If Oricom Baby Monitors Can Be Hacked: 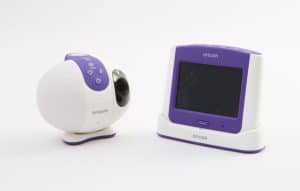 Can Oricom Baby Monitors Be Hacked?

Baby monitors have the potential to be hacked, however, it is unlikely that an Oricom baby monitors will be targeted and exploited.

If you are still concerned, you can improve your overall WiFi security by changing any default passwords and ensuring those passwords are unique.

If your Oricom baby monitor sounds as if it is being hacked then it’s understandable that you’re concerned.

However, with the exception of hearing the hacker speaking to you over the monitor, it is unlikely that the sounds you are hearing are in fact an indication that your device has been hacked.

Strange sounds should not necessarily give you cause to throw out your Oricom baby monitor. Baby monitors, such as the ones made by Oricom will make unusual sounds due to a few common factors.

The cause of these unusual sounds are likely due to the following:

Many sounds that emanate from your baby monitor may sound unusual, however, by studying the troubleshooting guide in your Oricom baby monitor’s manual you are likely to find a more probable cause rather than hacking.

It’s difficult for most people to understand why someone would want to hack a baby monitor.

You may be wondering what would cause an individual to pursue such a niche attempt at infiltrating a piece of technology that is used by parents to keep their baby safe.

That said, there are a few reasons why someone will, and has, hacked baby monitors.

Check out our blog about can non-wi-fi baby monitors be hacked?

Are There Any Reports Of Oricom Baby Monitors Being Hacked?

Thankfully, as of this date, there have been no official reports of Oricom baby monitors being hacked.

Other brands, such as the brand Wyze, made the headlines earlier this year after reports of several of their monitors being hacked due to a verification bypass flaw in the firmware. However, this has since been resolved.

Perhaps due to the hype surrounding the topic of baby monitors being hacked, there are unofficial reports or rumors about the brand Oricom circling the web – yet nothing has ever been officially proven.

Can You Check If A Baby Monitor Is Being Hacked?

So you’ve heard the horror stories and the reports of baby monitors being exploited, but you may still be wondering how you can tell if your specific device has been targetted.

There are a few main things to look out for which could indicate that your baby monitor has been hacked.

However, it is always worth checking your device properly, referring to the user manual, and by talking with anyone you know who has access to it, before jumping to conclusions.

That said, if in doubt, switch off your device until you are certain it is not posing a threat.

Is Your Camera Moving On Its Own Accord?

Is Your LED Light On When It Should Be Off?

Are Your Hearing Voices From Your Baby Monitor?

Can You Protect An Oricom Baby Monitor From Hackers?

Fortunately, there are several easy ways in which you can help improve the overall security of your Oricom baby monitor.

The most obvious way to increase security is to use a strong password.

Do NOT include names of your family or pets, however tempting this may be, as it is too easy to predict.

The original WPA (Wireless Protected Access) first came about over 10 years ago, so it’s advantageous to ensure your router is up-to-date and supports the most recent version-WPA3.

Another method to improve security with your Oricom baby monitor is to always update the firmware to the latest version.

This prevents any bugs or glitches that leave your monitor vulnerable.

Lastly, disable remote access unless its use is required.

Oricom’s latest range of baby monitors employs what is known as FHSS.

The folks at TellMeBaby.com stated that:

The main feature parents want to look out for is a digital baby monitor with frequency-hopping spread spectrum (FHSS) – this new technology is a powerful way to keep peeping toms away from your device.

Can Oricom Baby Monitors Be Hacked When Not On WiFi

Up until recently, Oricom baby monitors did not have any WiFi capabilities.

However, Oricom’s new Nursery Pal range of baby monitors has two ways to connect to WiFi by using:

Both of these methods are incredibly secure but are still susceptible to hackers.

If your units have lost connection with the WiFi it is near impossible for them to be hacked via your internet connection.

A model that has dual radio and WiFi abilities still can have the potential to be hacked when not using the WiFi option – though this is highly unlikely as the hacker would need to be in close proximity to the parent or baby unit.

It is worth noting that however unlikely it is to be hacked, unfortunately, there is no absolute method to prevent it even when disconnected from WiFi.

Read this blog about can BT baby monitors be hacked?