We all know that turning your speakers up too high can damage them, as their own vibrations from making such loud noise can harm sensitive internal components.

It seems logical that if it can damage speakers by producing too much noise, perhaps microphones can be damaged by absorbing too much, but is that true?

Here’s How Microphones Are Affected by Loud Noise:

Most microphones can handle sounds louder than your ears can. The sound would have to be way above levels that would cause major damage to human ears before it could also damage a microphone. Large pulses, saliva, and popping sounds are most likely to harm microphones rather than loud sounds. 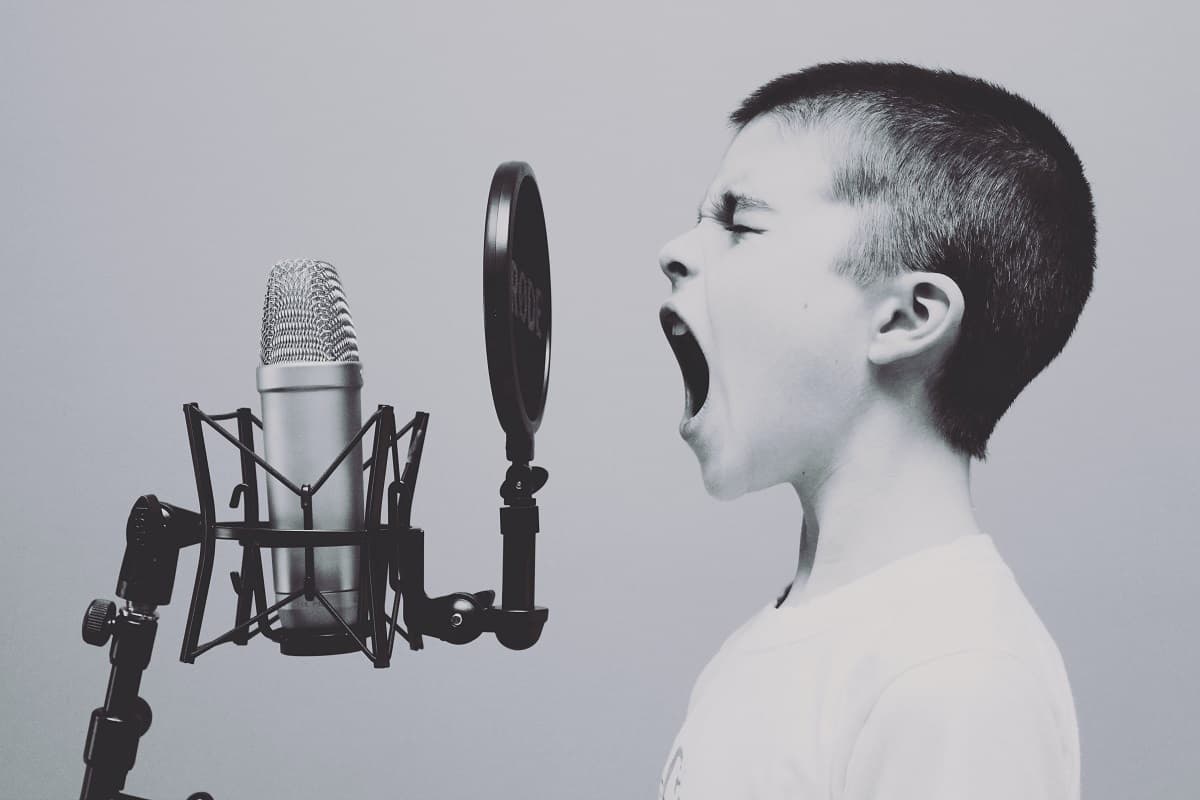 How High of Sound Levels Can Microphones Handle?

Microphones can be damaged by high-velocity blasts of air, which can be produced by very, very loud noise, but it would be well past the point of melting your ears and, therefore, well outside the range most microphones will ever be exposed to.

Tapping a microphone can, therefore, potentially cause damage, though it’s usually the speaker system that will be damaged by the sudden noise from the tap and not the microphone itself.

Notably, ribbon and condenser microphones are particularly sensitive to tapping and on the safe side. It’s best never to tap any microphone.

Can You Damage Microphones by Shouting TOO Loud?

The good news is that, as we mentioned above, it would be pretty hard to damage your microphone with your voice.

That said, shouting into a microphone can potentially direct a lot of saliva at the mic. Even if you don’t feel like you’re spitting, tiny particles of saliva can travel on your breath and act as a corrosive agent to the delicate inner workings.

In this way, you can slowly damage microphones by shouting into them but not because of the volume of the shout itself.

To protect against this, you can use any number of protective shields appropriate to your situation, such as a pop filter in an indoor recording studio, a windscreen outdoors, etc.

With a filter to keep the saliva in your breath out of the mic, you can avoid causing damage in this way.

Can Blowing into a Microphone damage it?

Blowing into a microphone may not be the worst thing you could do, but it’s definitely on the list.

Not only does blowing into a mic carry saliva, but it also creates a sudden blast of air that it wouldn’t create during normal speech, singing, or even shouting.

As we’ve mentioned, bursts of air are exactly what cause the most damage to mics, rather than loud sounds themselves, so blowing into a microphone is like playing with fire.

Ribbon microphones are especially sensitive to bursts of air and can be irreparably damaged by blowing into them even once or twice.

Much like tapping a mic, to be on the safe side, it’s probably best to avoid blowing into any microphone. If you must blow into a microphone, don’t use a ribbon mic.

The sound would have to be way above levels that would cause major damage to human ears before it could also damage a microphone from sheer volume.

While it might be rare indeed for a microphone to be exposed to sounds that loud, there are a few situations where you might think to use a microphone in an environment you’d never subject a human ear to.

In a band, your microphones might end up next to other powerful instruments. Therefore, going to want to be sure that the specific mic you use is built to handle that kind of abuse.

If it’s not, you can very easily break it beyond repair.

While loud sounds alone will not damage most microphones, ribbons are especially delicate, and—to be on the safe side—you’re best off keeping them unplugged and safely put away in their box whenever you’re not actively using them.

Any Long-Term Effects from Loud Noise Around a Microphone?

Let’s take this opportunity to go over the two major phenomena of microphone use that can cause damage over time and tend to be associated with the noises we make around them, even if the noise itself is not the direct cause:

In some cases, while the overall sound volume would not damage the microphone, these plosive sounds can degrade the mic over time.

Remember how we mentioned bursts of air being a primary culprit in causing microphone damage? Well, plosive sounds create exactly that kind of air burst.

Use a pop filter to protect your microphone against the long-term degradation caused by exposure to plosive sounds.

Pop filters sit between your mouth and the microphone itself, and not only do they protect your mic from damage in this way, but they also make the recording sound better by smoothing out those harsh popping sounds, true to the name.

Every time we breathe out—be it to talk, sing, or shout—tiny droplets of saliva are carried on our breath. These droplets carry two dangers to microphones: moisture and corrosive salts.

Moisture and corrosion are notorious enemies of almost all electronic devices, and microphones are no exception. The moisture in your saliva can cause electrical shorts, and the salts can corrode metal parts and cause them to fail over time.

To protect against the long-term damage caused by your saliva, use any filter or protective cover that blocks saliva from entering the microphone.

Pop filters, discussed above, will do this, and so will most windscreens and other protective devices.

Double-check that whatever kind of screen you’re using does indeed block saliva, and you’ll protect your mic from this threat.

Why You Shouldn’t Tap a Microphone

Can You Break Your Mic by Blowing into it?