It can be a little confusing and perhaps more concerning when your favorite music service requests access to your camera for no apparent reason.

Unfortunately for many Spotify users, that’s exactly what’s been happening to many, based on posts all over the official support forum and other message boards.

So today, we’re going to try and get to the bottom of why, exactly, Spotify might be trying to access your camera and what you can do about it.

Here’s What We Know About Spotify and Camera Access:

Some laptop users report that the webcam indicator light turns on upon opening Spotify without notification or request. Spotify claims that its app does not require camera access and that these notifications must originate elsewhere. 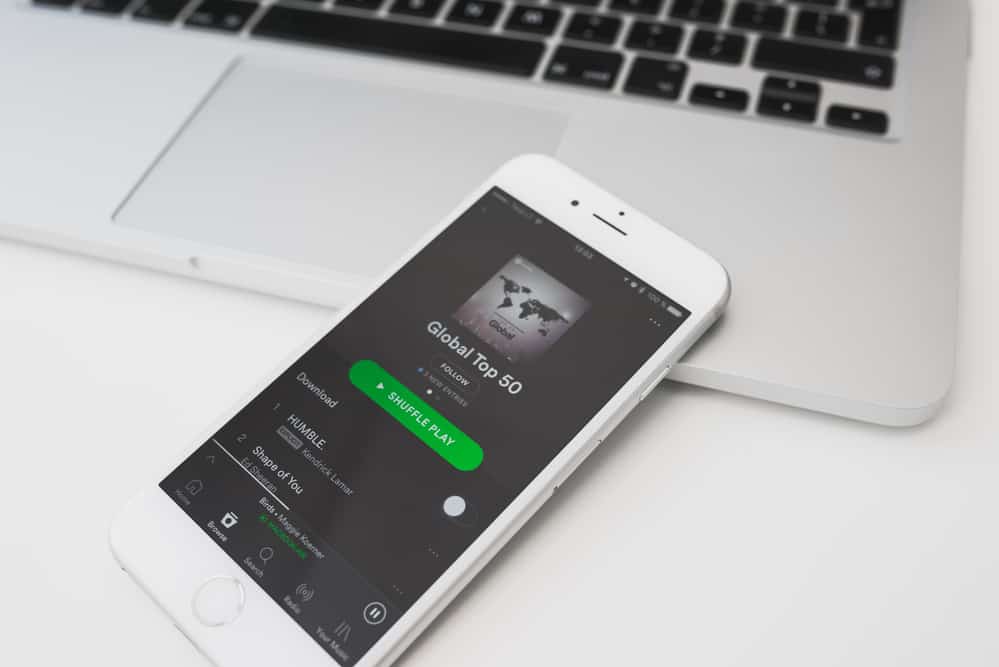 According to Spotify customer service representatives, it doesn’t!

In some cases, it’s been posited that a third-party program using spatial audio could be the culprit, rather than Spotify itself, requiring the use of your camera to “spatialize” your audio.

The argument is that some spatial audio programs need to see where your head is to calibrate your audio experience accordingly.

However, this convenient excuse doesn’t explain the scores of users who adamantly claim they are not using any spatial audio but still experience this issue.

In some cases, the user seeking support has done a clean re-install of Spotify, uses no third-party audio software, and still claims to receive the camera access request.

Another claim that might excuse Spotify is that users are simply experiencing a false positive from their antivirus software for whatever reason.

In the end, we can’t make any concrete claims with certainty. Without hard evidence, it’s Spotify’s word against the various users making these claims.

That being said, we have no particular reason to doubt the reports of so many users all experiencing the same thing, while we do have some cause to doubt Spotify’s word, but more on that later.

Are There Any Benefits to Letting Spotify Access the Camera?

The best-case scenario is that Spotify representatives’ claims are correct, and it’s some third-party software interaction issue or just a weird glitch on Spotify’s end.

If that’s true, then there’s nothing you’re missing out on by saying “no” when Spotify asks for access to your camera because there is no official reason for it to do so.

Do not give Spotify camera permission if it asks for it, just in case it is a third-party virus or issue.

How Do You Prevent Spotify from Getting Access to the Camera?

If you’re one of the many users who experiences a request for access to your camera upon opening Spotify, click the “no” option in the prompt you receive.

However, if you’re one of those users who doesn’t get a prompt and sees the webcam light turn on when opening Spotify, it might not be so simple.

You can unplug it using a USB or some other plugged-in webcam. It’s good practice to always unplug a webcam when you’re not using it.

On a laptop or monitor with a built-in webcam, however, you can’t as easily unplug it.

In this case, you can (and probably should whenever you’re not using it) stick a post-it on or otherwise cover the camera with something so it can’t see anything you don’t want it to.

You should also be able to go into your device settings for the camera and set permissions for specific apps, in which you can deny Spotify access to your webcam.

If you can’t find a way to enable or disable the camera for specific apps, you should be able to disable it entirely from your settings.

It’s not as convenient, but you can re-enable it whenever you’re about to use your webcam and leave it disabled the rest of the time.

Does Spotify Let You Know When they Access the Camera?

Spotify customer service representatives have repeatedly stated that Spotify does not access your camera for any reason.

Therefore, Spotify will NOT warn you if your camera is being used, because their software isn’t built to use your camera – or to report the camera being used.

Yet users keep reporting the issue and claiming otherwise, so it’s impossible to say for certain which is true. We’d recommend erring on the side of caution here.

Does Spotify Record You Through the Camera?

A Forbes article from a few years back scratches the surface of Spotify’s sketchy history with invasive data collection and casts the company in a pretty unflattering light.

Spotify’s CEO Daniel Ek apparently made a statement on the matter, but the statement has since disappeared from the site, and the link now returns a 404 error.

We only know about the statement because it’s mentioned in this support forum post, but as you can verify for yourself, Ek’s statement no longer appears to exist.

Spotify Just Got Real Creepy with the Data it Collects on You.