In the past, computers were plugged in at all times. This was done for convenience, and also because people had no idea that unplugging a computer could save energy.

Today, most computers are designed to be left on all the time, but there are still some people who turn them off when they’re not using them.

This is especially true with laptops and smartphones, which generally have better battery life when they’re left plugged in.

So, should you unplug your computer when it’s not being used? Or should you leave it plugged in 24/7? We’ll look at both approaches so that you can decide what works best for your needs.

Here’s If You Should Unplug Computers When Not in Use:

If you are not using your computer for a few hours or more, unplug it. This will help protect you against sudden power surges and possible damage to your computer’s internal components. However, if you are going to be away from your computer for only a short period of time, then it is unlikely that there will be any difference. 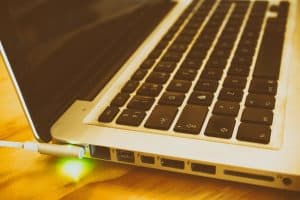 Is It Safe to Keep Computers Plugged in When Not in Use?

It’s not necessary to unplug your computer at night or when you leave the office for the day. If you want to save money on electricity bills and reduce your carbon footprint, though, there are other ways to do so that will have a bigger impact than switching off your machine every night.

Here are a few reasons why you should unplug your computer when not in use:

Does Unplugging a Computer Save Electricity (And Money)?

The reason why unplugging your computer saves electricity is that most modern computers use less power than they did back in the days of CRTs and other older monitors.

The old CRT monitors used to consume massive amounts of energy because they were always on even when they were turned off.

Modern LCDs and LED monitors use far less power than their predecessors, so there’s no need to worry about leaving them plugged in all the time.

The energy savings from turning off a PC are small compared to other energy-saving measures like turning off lights or adjusting thermostats.

Should You Unplug Computers When Going on Holiday?

The short answer is yes. It’s not just a good idea, it’s essential for the longevity of your computer.

You might think you can get away with leaving your computer running on a holiday.

After all, it’s not like you’re going to be using it for anything important, right? While it may not seem like much of an issue when you leave your computer plugged in and unattended, there are significant risks associated with leaving it on when you aren’t using it.

The biggest risk is that of power surges or outages. When there are issues with the electricity supply to your house, they can cause damage to your computer that will make it unusable until repairs are made.

Even small power surges can fry components inside of your machine if they occur while the machine is running. If you want to avoid this type of damage, unplugging your computers when going on holiday makes sense.

Do Computers Last Longer When Unplugged?

Many people believe that computers will last longer if they are turned off when not in use. While it is true that a computer’s internal components will last longer when they aren’t being used, there is no difference between turning the computer on and off and leaving it on all the time.

Both methods of operation will eventually lead to wear and tear on the internal components.

The only way to prevent damage to your computer’s internal parts is by keeping it cool and clean. The fan should be cleaned regularly, as should the vents around the case.

If you are using a laptop, make sure that you don’t set it on anything soft or squishy that could block airflow through the vents. Laptops generally have smaller fans than desktops, so make sure you keep them clean.

A desktop machine will last longer than a laptop because it has more internal fans and cooling systems to keep it cool while in use. But even then, the difference isn’t huge — only about 10%.

If you have a laptop with built-in batteries, however, then keeping it plugged in all the time might actually be better for its lifespan than running on battery power most of the time.

Theoretically, a computer doesn’t need to be unplugged. However, there are some advantages to doing so from time to time.

The biggest advantage is that it reduces wear and tear on the components, which could extend the life of your computer. This is especially true for external drives and peripherals such as printers and scanners.

Another advantage is that you won’t have the energy consumption costs associated with running a computer 24 hours a day. Over time, these costs can add up significantly and may outweigh any savings from not having to replace parts prematurely.

One disadvantage of unplugging your PC is that it could potentially get damaged if there’s a power surge while it’s off. If this happens, you could lose all your data or have serious damage done to your hard drive. The best way to deal with this issue is by using an uninterruptible power supply (UPS) that will provide power during a brief power outage or brownout.

Is It Bad to Unplug Your Computer?

If you’re a PC user, then yes, it’s bad to unplug your computer. You might damage your hardware. If you’re a Mac user, though, unplugging the power cord won’t do any harm to your machine at all.

This is because PCs use Dynamic Voltage and Frequency Scaling (DVFS) technology to manage their power consumption dynamically based on workloads and thermal conditions.

This process involves lowering voltage and frequency when the computer is idle or under low load and increasing them when the load increases.

The result is that when a PC is under no load or very low load, there’s no need for high voltage and frequency settings which can cause overheating issues.

In contrast, Macs don’t use DVFS technology for power management at all since they have fixed voltage and frequency settings for different processor models.

Hence there’s no need for the OS to manage these settings dynamically based on workloads or thermal conditions because they’re already set to maximum performance by default – hence there’s no chance of overheating issues either.

Can It Hurt to Unplug Your Computer Every Night?

To sum up quickly, yes, it can.

The longer answer starts with the fact that computers use a lot of power. Even when they’re turned off, some of that power is still being used to keep the memory and hard drive intact.

So if you leave your computer on all night, you’ll be wasting a significant amount of electricity: According to one estimate from the Natural Resources Defense Council (NRDC), Americans spend $1 billion per year on wasted energy from computers left on overnight.

That’s enough money to power all of San Francisco for nine months.

But even if you’re not worried about environmental impact, there are other reasons to shut down your computer before bed: namely, overheating and data loss.

Overheating is a risk when your computer has been running at high speeds all day long — especially in the summer months when temperatures are high and air conditioning isn’t always available. The heat generated by these devices can cause damage to internal components and shorten their lifespan — not to mention cause discomfort for anyone using them while they’re plugged in at home or work.

Data loss is also possible if you don’t properly shut down your device before leaving it unattended for an extended period of time.

Read our blog here about can you overload an extension cord?