There are a lot of myths about extension cords. People think that leaving them plugged in to the wall when not in use is bad for the cord or your appliances. Others believe that unplugging extension cords will save you energy.

In this article, we’ll take a look at whether or not you should unplug your extension cords and power strips.

Here’s If You Should Unplug Your Extension Cord:

Unplugging your extension cord when it’s not in use can actually save energy over time. This will not only help reduce your carbon footprint, but it will also save you money on your electric bill. It also helps extend the life of your electrical equipment by keeping them cool and dry. 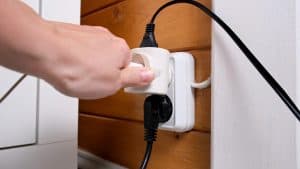 There are plenty of myths about extension cords, including whether it’s safe to leave them plugged in or not.

The reality is that there are many factors that come into play when deciding whether or not you should unplug your extension cord when not in use, including the type of extension cord (extension cords are not all created equal), how long it has been plugged in and how much current it is carrying.

Is There Any Benefits to Unplugging Extension Cords?

Unplugging extension cords, power strips and other devices that are not in use can help save energy and money. However, this is only true if the devices are left plugged in for an extended period of time.

When you unplug a device, it will immediately stop using electricity. This is why it’s important to unplug your electronics when you aren’t using them.

In addition to saving energy, unplugging your electronics also makes them safer to use because it prevents fires from starting by accident.

For example, if you leave your phone charger plugged in while you sleep at night, there is a chance that a fire could start in your house while no one is there to notice it before it gets out of control.

Here’s When You Should Unplug it.

When You Aren’t Using It

It’s a good idea to unplug your extension cords when they aren’t being used.

This will help protect you from shock or fire while also prolonging the life of the cord itself by reducing heat build up.

When You’re Working On The Electrical System

If you’re working on an electrical system, it’s important that all power sources be turned off before working with live wires or installing new ones.

Unplugging your extension cord will help ensure that this happens safely without causing any damage to yourself or your home.

What About Power Strips?

You don’t have to unplug power strips, but it’s still a good idea.

Power strips are designed to stay plugged in at all times, but they can overheat and cause fires if they get too hot or if something goes wrong with the wiring inside them.

You may also see a warning label on your power strip that says it should be unplugged when not in use for safety reasons.

Power strips usually have multiple outlets on them and allow you to plug in multiple devices without having to unplug anything first. This way, when you turn off one device, all of the others shut down at once.

That said, we still recommend unplugging power strips when not in use.

They aren’t always as fireproof as extension cords are — especially if they’re made with cheap plastic — so there’s still risk of fire if there’s a short circuit or faulty wiring inside your home’s electrical system.

Extension cords come in different lengths and gauges (or thicknesses) depending on the amount of electricity they can safely carry.

You can find a variety of different types of extension cords at home improvement stores or online retailers like Amazon — from heavy-duty outdoor extension cords that can withstand being exposed to rain or snow to indoor-only models made with thinner wires that aren’t meant for outside use.

The thicker gauge wires are more expensive but also more durable and able to handle higher amounts of electricity without overheating.

Do Extension Cords Use Electricity If Nothing Is Plugged into Them?

For example, if you plug a lamp into an extension cord, then unplug the lamp and plug in a different device, such as a computer or printer, then this second device will start drawing power from the outlet through the extension cord because it’s connected to it.

Electrical energy cannot be created or destroyed — it can only be converted from one form to another.

In this case, electrical energy is being converted into heat when nothing is connected to the outlet on your extension cord.

The amount of energy lost depends on how much resistance there is between the two ends of your cord and how long it takes for heat transfer to occur.

The longer your extension cord is and the longer it takes for heat transfer to occur, then more energy will be lost as heat over time.

Is It Safe to Leave Extension Cords On?

The answer is yes and no. Using an unplugged cord can lead to overheating, fires and electrocution. However, if you use extension cords properly, there’s little risk of injury.

There are two reasons why:

If you have an extension cord that stays plugged in all the time, it could shorten its life due to excess heat build-up, which can lead to sparks and fire hazards.

But as long as you keep your extension cord away from anything flammable like fabric or furniture, there shouldn’t be any problem leaving it plugged into an outlet all day long.

It’s also important to keep extension cords out of high-traffic areas so that people aren’t tripping over them or snagging them on objects as they walk by.

If you’re going to leave an extension cord plugged in, make sure it’s behind something like a desk or table so it doesn’t get knocked over by accident.

The NFPA estimates that about half of all home fires started with electrical problems, so any time you use an extension cord, make sure it has the proper gauge for its intended use.

You should also make sure that your extension cords aren’t tangled up with other cords or cables; this increases the risk of fire because a single spark could ignite multiple objects at once, according to Consumer Reports magazine.

Should You Unplug Things When Not in Use?

Leave it on, and you might be inviting trouble. The National Fire Protection Association (NFPA) recommends unplugging appliances whenever possible to prevent electrical fires from occurring.

If you can’t keep your device off while at home or work, consider using a surge protector or power strip with an on/off switch.

Unplugging everything at once is a good idea if you’re leaving the house for a few days — especially during extreme hot or cold temperatures — but otherwise it’s not necessary to unplug everything every time you walk away from it for a few minutes.

When you leave an appliance or other device plugged in even when it’s not being used, you’re wasting energy — and that means you’re wasting money on your electric bill.

The amount varies depending on what else is going on with your home at any given moment — if everyone else has turned off their lights and gone to bed, for example, then leaving that lamp on probably isn’t going to make much difference at all — but every little bit helps.

And if you’re using an extension cord for something like a television or computer monitor where the device itself is supposed to be unplugged once it’s been turned off anyway (because they tend to get very hot), then leaving the extension cord plugged in even when the device is off could lead to overheating issues or even fire hazards.

Unplugging appliances also prevents a phenomenon called vampire power, which means “a device or appliance drawing standby power from the electrical grid even though it’s turned off.”

Vampire power accounts for about 5% of total residential electricity consumption in the United States each year, according to Energy Star.

Extension cords are a necessity for many homes and businesses.

They allow us to use power tools and other appliances that need to be hard-wired into the building’s electrical system.

Extension cords are just as safe to leave plugged in when they’re not being used as they are when they are in use.

Just make sure to unplug them if you won’t be using them for a long period of time, or if water or other contaminants might get near them. You’ll prolong their lifespan and improve the safety of your home.