The most common type of airplane seatback headphone jack is the kind that requires you to use headphones provided by the airlines.

However, planes have universal headphone jacks that work with any headphones.

Many airplanes use 2.5mm jacks, and most noise-canceling headphones come with adapters that allow them to connect to 2.5mm jacks.

Here’s How To Use Your Own Headphones On Airplanes:

To use your own headphones, you’ll need either an adapter or a pair of Bluetooth headphones. Many planes have a smaller jack, requiring you to use an adapter or Bluetooth. The standard size for consumer electronics is 3.5mm, but some devices use larger 6.3mm jacks or smaller 2.5mm jacks.

How To Connect Minijack Headphones In Airplanes:

If you’re a frequent traveler, you know the struggle of not being able to use your headphones on airplanes.

Many airlines use systems that only accept double jacks and not standard minijack headphones. Fortunately, there are a few ways around the problem.

The easiest solution is to use an adaptor, which will turn your minijack headphone cable into something you can plug into the inflight entertainment system.

These adaptors are cheap and easy to find online, so it’s worth getting one or two for your next trip.

Here are some great mini jacks perfect for any flight from Amazon:

Connect your 1/4″ headphones to a 3.5mm audio input device with this Insignia NS-HZ314 mini adapter that features nickel-plated copper for efficient signal transfer and corrosion resistance. 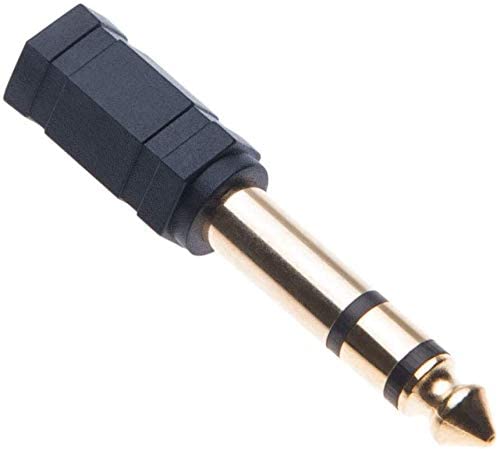 Check Out The Current Prices Here!

A concave jack allows easy insertion of the plug.

The TISINO 1/4″ Female to 1/8″ Male Mini-Jack Adapter is perfect for connecting your headphones or earphones to the 1/4″ TRS output of an instrument, mixer, amplifier.

Check Out The Current Prices Here!

It is built with chrome-plated and 24K gold-plated, and it will give you years of use without signal degradation.

What Headphones Ports Do The Airlines Use?

The first thing to understand about airplane entertainment systems is that there are two different headphone connectors, a two-pronged 2.5mm port and the more common 3.5mm port.

The 2.5mm port is mainly used on older planes made by Boeing and Airbus, designed when portable CD players were the most common source for listening to music before iPod and other devices came out.

CD players generally use the smaller 2.5mm connector, so many older airplanes were built with these ports.

Airlines that use a dual-pronged headphone port include:

Airlines that use a single-pronged headphone port include:

Can All Headphones Work With Airplanes?

Not all headphones are designed to work with airplanes.

Aircraft use a slightly different type of audio plug for their entertainment systems than most other devices, which makes it challenging to use your headphones in flight.

Many long-haul flights have an entertainment system built into the back of each seat that you connect your headphones to through a 2-plug socket, officially called a PJ 068 AC plug, but more commonly known as a “2-1 Plug” or “3.5mm Stereo Jack”.

This is the same type of socket used on iPods and mobile phones so that you can use your regular headphones with these devices. The problem comes when trying to use your iPod on an aircraft entertainment system or vice versa.

Aircraft require a different plug and won’t work with the standard jack size.

There is an additional concern related to noise-canceling headphones.

Most noise-canceling headphones operate at about 30 dB of noise reduction over what you would get from a simple pair of earplugs.

The FAA, until recently, did not allow any headphones with active electronics to be used during takeoff and landing (including noise-canceling).

Therefore, you can’t use noise-canceling headphones during this time unless they have a battery pack that you can remove (to disable the active electronics).

Why Do Airplanes Have Special Headphone Jacks?

Passive headphones need no power source to work. They use the device’s electrical current they’re plugged into to make the speaker function.

A typical pair of wired earbuds you get with an iPhone or other portable music player is an example of a passive headphone.

Active headphones contain a small amplifier or other circuitry that boosts the signal from your smartphone or portable music player, making it louder than would be possible with passive headphones alone.

That tiny battery usually sits in a “pod” attached to the cable near your ears, but sometimes it’s built into one ear cup on a pair of over-ear headphones.

This is because the Federal Aviation Administration used to require that all electronic devices onboard an airplane be turned off completely during takeoff and landing. (See below for more details.)

Can You Use Bluetooth Headphones Or Earbuds On Airplanes?

Bluetooth headphones and earbuds are allowed on flights.

You’ll probably need to turn them off during takeoff and landing. Some airlines do not allow wireless headphones during these times, so it’s best to keep a pair of wired headphones handy just in case.

As for the rest of the flight, you can use Bluetooth headphones or earbuds as you would anywhere else. You can listen to music, stream movies or even take calls if your flight supports Wi-Fi.

Many major airlines now allow passengers to use Bluetooth headphones during a flight. That’s because most planes are now equipped with seatback entertainment systems that include Bluetooth connectivity.

The Federal Aviation Administration (FAA) updated its rules for portable electronics devices in 2013 to say that Bluetooth-enabled devices were allowed for use during all phases of a flight, as long as the device itself didn’t interfere with the aircraft’s electronics.

Of course, passengers should always check with the airline before traveling since rules and regulations vary from carrier to carrier.

Also, the FAA’s rule applies specifically to commercial passenger flights and does not apply to private aircraft or flights operated by the military.

Noise-canceling headphones work during flights, but don’t expect them to be as effective as when used at home.

Most noise-canceling headphones require batteries to power their electronics. They can only draw so much energy from the plane’s headphone jack, which reduces how much noise-canceling circuitry can work.

The result is that your noise-canceling headphones will still work with the airplane jack, but they won’t cancel out nearly as much noise as when you use them in your home or office.

Noise-canceling headphones have been around for years, and they’re still a great way to block out extraneous sounds.

When you turn them on, a microphone inside the ear cup picks up external noises and sends signals to a bit speaker inside the headphone that counteracts the background noise with anti-noise.

In other words, the headphones themselves cancel out some of the ambient noise around you.

That’s why they don’t work as well in louder situations like on an airplane, where there might be so much noise that it’s difficult for the headphones to cancel it all out.

There are a few technical hurdles when using your own headphones on airplanes.

However, if you’re someone who travels consistently, it’s worth looking into. It’s not perfect, but it does seem possible if you get the correct adapter.

I hope this article gave you some helpful tips and alternative solutions to try out.

Screenrant: Headphones On A Plane?