One of the most common questions we get about microphones is if it’s ok to use them in cold weather. Because some microphones are built with sensitive electronics, it can be easy to wonder if using them in extreme temperatures can cause damage.

The answer depends on your type of microphone and how extreme the temperatures are. Also, some microphones are better suited for use in cold weather than others.

In this article, I’ll explain the effects of temperature on microphones, how to protect your mic against extreme temperatures, and what you should do if you damage your mic.

In short, yes. Extreme temperatures can have a significant impact on audio quality and even damage your microphone or recording device. There are mics that can handle cold and hot temperatures better but as with most electronics there are limits to this as well. 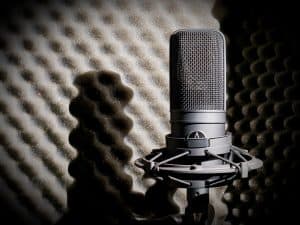 A mic is not built to withstand these types of circumstances, and long-term exposure will cause a decrease in quality, sensitivity, and lifespan.

If you are planning on using your microphone in extreme temperatures, you should take the necessary precautions to ensure that it does not get damaged.

There are two main ways that temperature affects microphones:

How Does Temperature Affect Microphones?

In reality, almost any microphone will work in a wide temperature range.

So as long as your microphones are within these ranges, you should be fine.

Why does temperature affect mics?

Microphones are delicate pieces of equipment. They contain lots of tiny components that work together to produce sound. Exposure to extreme temperatures will cause expansion and contraction of these components, which can lead to issues such as:

If you’ve ever been to a concert where the sound was perfect and then went to another one that was way too loud, or where you could barely understand the singer because of feedback, you know that weather can have a big impact.

Sonic clarity and volume can be affected by everything from temperature and humidity to rain, wind, snow, and ice.

Because music is based on waveforms — patterns of varying pressure in the air — any change in air pressure can affect it.

Atmospheric pressure isn’t affected much by heat or cold, but humidity does make air molecules more closely packed together. This creates higher atmospheric pressure, which has a dampening effect on waveforms.

The result is that high-pitched sounds are dampened more than low ones.

A singer’s voice may become more difficult to understand because higher-frequency consonants are harder to hear.

A violin solo will be less clear than a cello one at the same volume, for example.

Read this other blog about is my Firestick listening to me?

Can Freezing Temperatures Affect A Microphone?

The most essential reason freezing temperatures will affect a microphone is the capsule.

MYLAR and PET film are very sensitive to temperature changes and humidity levels in the air. If you have ever heard of condensation on a microphone, therefore it happens.

The humidity in the air gets trapped inside the mic capsule, causing condensation to occur. This leads to transient damage to the mic. If this happens enough times, it can cause permanent damage to your mic.

It is not uncommon to find a microphone specification that includes an operating temperature range. For example, the

This is because microphones are electrical devices and the materials used in their construction have properties that may change with temperature. These effects can result in frequency response, sensitivity, noise, and distortion changes.

Most microphones use electret capsules these days, and they are also affected by temperature.

The materials used in electret capsules are usually stable over an extensive temperature range. Still, you may notice some minor changes in the low-frequency response of electret mics at extreme temperatures (eg, if you put one in the freezer).

How COLD Is Too Cold For A Microphone?

As the temperature drops, there are a few things that happen.

Condensation inside the microphone builds up as the moisture in your breath condenses on the surfaces of the capsule and inside the amplifier circuit.

This can cause odd noises, but this will typically work itself out as the microphone warms back up to room temperature.

It’s annoying but not destructive.

Also, specific components inside a circuit will not function properly at shallow temperatures. But again, this is not typically harmful – just annoying.

The ‘but’ is that if you go SO cold that water actually freezes inside of your microphone – such as when you drop it into a frozen lake or leave it outside all night where it’s well below freezing – then damage can occur if enough ice forms to break any mechanical parts.

At best, this would just be a broken diaphragm or another mechanical part that you’d have to replace. At worst, it could be a break somewhere which could short out your circuit when it warms back up, and you turn it on again.

Heat can harm the quality of your recording, as well as the longevity of your microphones.

Other things are likely to be affected by heat:

What Type Of Microphone Is Ideal For Extreme Temperatures?

Unfortunately, no microphone can survive in extreme temperatures.

A couple of microphones can withstand temperature spikes, but they are not ideal for recording and are only made for reliable communication.

We have a couple of options that could work depending on your situation. For example, if you’re looking to record audio in freezing temperatures, I recommend using the Miniature Lavalier Microphone (Part Number: CVM-MINI-MIC). This microphone is designed to be used down to -40°C (-40°F) and only requires an external power supply when being used below 0°C (32°F).

For recording in extreme heat, we would recommend the B6 Boundary Microphone. The B6 has a maximum operating temperature of 120°C (248°F). This microphone was designed with a stainless steel housing and carries an IP67 rating for protection against dust and water ingress. Please note that this microphone is not advisable for high humidity or in wet environments.

No matter how careful you are, your microphone will eventually get damaged. You can slow the process down by investing in a good cause, but eventually, something will go wrong, and it will happen in a way that could be expensive to repair or even result in lost recordings.

Some people suggest that microphones should be kept at room temperature because the shock from sudden temperature changes is enough to cause damage.

While this may have been true in the past, modern microphones are built with high-quality components that can withstand even the most extreme environmental conditions.

Red our blog about is my Fitbit listening to me?