Extension cords can be used to power your devices while you’re away from an outlet. But should you use them? Here’s what you need to know.

Extension cords come in handy when you want to use a device without being too close to the outlet. But do they damage the charger or battery?

In this article, we’ll explore whether or not using an extension cord damages chargers and if there are ways to prevent this from happening. 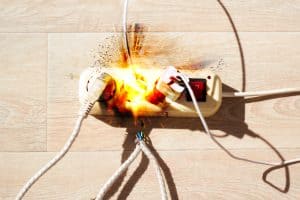 Do Extension Cords Affect Chargers in Any Way?

They do affect but the degree of affect varies depending on a few things like:

Is It Recommended to Not Use Extension Cords with Chargers?

All electrical appliances, including chargers, are designed to be used within a specific voltage range. This is usually 120 volts, but some items may operate at 240 volts or even more. If you use a charger outside of its specified voltage range, it can damage the device and even pose a safety risk to you and others around you.

While there’s nothing wrong with using an extension cord with your charger, it’s not recommended that you do so unless absolutely necessary. The best way to make sure your charger works safely is to use the one that came with it.

When you plug an extension cord into a wall outlet, it creates a circuit that extends the length of your wall socket. The wire in this circuit is usually copper, which is a good conductor of electricity.

In comparison, the wires inside a charger are typically made of aluminum or tin-coated copper, which aren’t as efficient at conducting electricity. This means that when you use an extension cord with a charger, there’s more resistance in the circuit than if you used just the charger alone.

The increased resistance causes more heat to build up in both ends of the extension cord — at your outlet and at your device’s charging port.

This heat is essentially wasted energy — it doesn’t do anything for you except make your device warm while charging and potentially shorten its lifespan by increasing wear on components like batteries and electrical contacts. In extreme cases, overheating can even cause fires or other serious problems.

There are other things that can damage chargers, such as:

Check out this other blog about can extension cords be left outside?

Is It OK to Use an Extension Cord with Phone Chargers?

The answer is that it depends on the type of extension cord and charger you are using.

The most common problem is when you use an extension cord with a charger that is not built to handle the extra current draw. For example, if you’re using a smartphone with a USB port to charge, it’s better to use a standard USB cable instead of an extension cord.

How Is a Charger Damaged by Extension Cords?

When a charger overheats, it can cause damage to the internal components inside the device.

The main part of a charger that gets damaged by extension cords is called an input filter — this is where electricity enters into your device, and it helps prevent it from getting overloaded.

When an extension cord causes too much heat in this area, the filter starts to melt and will eventually break down completely.

Yes, using an extension cord can affect the charging speed of your device. The length of the extension cord you use and the quality of it will determine how much it slows down your charge time.

You should avoid using any extension cords longer than 3 feet when charging your devices. This is because they may not be able to provide enough current (amperage) to support fast-charging technology like USB-C.

A way work this out is that, if you for example have a 10-foot long extension cord and the charger only needs 5 watts of power to charge your phone, then it should have no problem charging at full speed.

However, if your device needs 20 or more watts of power to charge fully, then the charger may struggle with this load and not be able to supply enough current for quick charging.

This is because most extension cords don’t have as high of voltage as wall chargers do.

Can You Leave an Extension Cord with Chargers Plugged In?

The short answer is yes, you can leave your device plugged in when not in use. However, there are some things you must consider before doing so.

First of all, make sure that your charger has a safety feature that shuts off the power from the outlet if it detects a short circuit or if the device overheats or catches fire. If not, then you may be risking your device’s life by leaving it plugged in for a long period of time (more than 24 hours).

If your charger doesn’t have this safety feature built-in, then make sure that you unplug it after every use to prevent any damage to your device.

Also keep in mind that leaving chargers plugged in over time can cause them to wear out faster than they should have; especially if they’re not designed for such continuous use.

Extension cords and charging devices don’t mix. They both increase the risk of something going wrong, whether that’s the possibility of an electrical fire or an electric shock while you’re disconnecting a charger.

Fortunately, while it’s not a guarantee, in most cases—should you feel comfortable with the quality of the extension cord and the wall outlet—there should be little to be worried about.

Read our blog here about do extension cord expire or work permanently?