Extension cords are a necessity in the world of home improvement.

They allow you to plug in power tools, appliances, and lighting fixtures where there is no outlet available.

While these cords are useful for their intended purpose, there are some things you should know before using them.

Extension cords do not expire once purchased. However, they can become damaged over time by heat, wear, or moisture. This damage can cause the cord to become unusable or even dangerous. You should check the cord on a regular basis for signs of damage and replace it if necessary to prevent accidents. 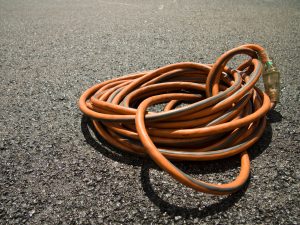 If you are looking for an exact answer as to how long extension cords last, it will depend on several factors including how often they are used, how often they are unplugged from their source of power and how well they were stored after purchase (i.e., in a cool dry place out of sunlight).

Extension Cords Are Rated for 15 Years

According to Underwriter Laboratories (UL), the organization that tests and certifies products for safety, extension cords are rated for use for a maximum of 15 years from their date of manufacture.

This doesn’t mean that they’ll stop working at that point; it means that UL won’t certify them as safe if they’re older than 15 years.

Check out our blog about can extension cords be left outside?

How Do You Know When an Extension Cord Has Gone Bad?

If you use an extension cord often, you may worry that it will become worn out or damaged over time. But is there a way to determine if the cord is still in good working order?

Here are a few signs that indicate when an extension cord has gone bad:

Do Extension Cords Have Expiration Dates?

The short answer is no — extension cords don’t have an expiration date. However, that doesn’t mean you should use them forever.

Extension cords do wear(expire), but it’s not like milk that goes sour after its date. The two main factors that affect how long an extension cord will last are the quality of the materials used and the conditions in which you store it.

In general, an extension cord with three or four outlets should be used for a maximum of 10 years, according to the National Electrical Safety Foundation (NESF). The NESF recommends replacing any extension cord that is cracked or damaged in any way.

Can You Use Really Old Extension Cords?

While there are no specific guidelines for how long an extension cord can last, you should replace it if it appears worn. This includes any cords that have been exposed to water or excessive heat. If you notice any loose wires or frayed cords, throw them out immediately because they could pose a fire hazard if plugged into an outlet.

In fact, there are some good reasons to use old extension cords:

If you’ve ever heard of people using old wires from old telephones to create home lightning protectors, this is why — they’re less likely to start fires that way compared to modern wires which contain more flammable materials like PVC insulation or polyester jackets (which can also melt if exposed to high heat).

What Can Cause Extension Cords to Go Bad?

When used incorrectly or allowed to deteriorate, extension cords can cause fires and even death.

Fortunately, many extension cords come with built-in safety features that prevent them from overheating, and they’re not like light bulbs or light fixtures that simply burn out after a certain amount of use.

There are several different things that can go wrong with an extension cord, though, which could cause it to fail or stop working properly.

There are several things that can cause an extension cord to fail:

When Should You Replace Extension Cords?

The answer to that question is not cut-and-dried.

You have to think about the quality of the cord and whether it has been damaged in any way. In general, extension cords should be replaced if they develop cracks or become frayed around the edges, or if they start to fray internally.

Many people think that all extension cords have a limited life, but that’s not true. There are some extension cords that are designed with durability in mind and can last for years before needing replacement. Other cords, however, are made with inferior materials and will begin failing after just a few uses.

The best way to know when it’s time for a new cord is to take into account how often you use it, how long it’s been in use, and what kind of quality it has.

The reason why people think that extension cords expire is because of the way they are marketed by retailers. Most of these stores want you to think that their products are better than the competition’s so they say things like “this cord will last for years” or “this cord is guaranteed for life.”

They also tell you that their cords are made from high-quality materials which helps make them more durable over time.

This may sound like a good idea at first glance, but it’s just a marketing tactic used by these companies so that you’ll buy from them instead of someone else who sells similar products at a lower cost than theirs do.

Check out our blog about should you unplug extension cords when not in use?

Extension cords can be a lifesaver when you need to plug in a lamp or fan in a hard-to-reach spot. But like most things, they have a shelf life and may eventually stop working, even if they’re not damaged.

There are several factors that can cause extension cords to go bad. Once you know what these are, you’ll be able to tell whether or not it’s time to replace your cord.

As a general rule, you can use an extension cord indefinitely. However, if the cord is not in good shape to begin with, it will wear out sooner rather than later.

If you need to replace an extension cord, make sure you get one that’s rated for the purpose you need it for. For example, if you want to use it outdoors, make sure it’s rated for outdoor use and has a weatherproof jacket on it.