Extension cords are designed to be plugged into a wall socket, which is already grounded.

So why would you ever need to ground an extension cord? Well, you may need to in order to protect yourself from electric shock or fire hazard.

Here’s If Extension Cords Need to Be Grounded:

The NEC does not require extension cords to be grounded, but it does allow them to be grounded if you want to. If you decide to ground an extension cord, it must have a ground fault circuit interrupter (GFCI) and a three-prong plug that includes a grounding pin. 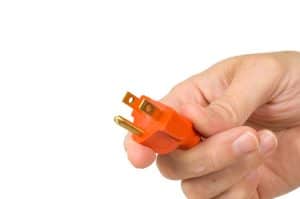 It’s important that you use the right type of plug for your needs.

If you’re using an extension cord outdoors (as opposed to indoors), then it must be a heavy-duty type that can handle harsh weather conditions — such as rain and snow — without losing power.

In addition, it’s imperative that all electrical devices are properly grounded before they’re used to prevent electrical shock or other problems from occurring during use.

Yes, extension cords are safe to use. However, it is important to keep the cord away from water and other liquids. Also, plugging in an ungrounded extension cord can be dangerous.

If you have a device that needs to be grounded, you should use a grounded extension cord instead of an ungrounded one.

A ground fault circuit interrupter (GFCI) protects against electrical shock by shutting off power if there’s a current leak between the hot and neutral wires or between the hot wire and ground wire. You can find GFCIs in outdoor outlets, on bathroom sinks, at pools and spas, around kitchen sinks and near washing machines.

An extension cord without a third prong is considered ungrounded because it doesn’t have a safety mechanism built into its design like GFCIs do.

They’re typically used for temporary purposes when you need more length than what comes with your appliance.

Unplugging an appliance from an ungrounded extension cord doesn’t work because it doesn’t have any electrical wiring inside to stop current from flowing through the device when it isn’t plugged in correctly.

Check out this blog about can extension cords be left outside?

The purpose of grounding an extension cord is not to protect from electrical shock. Instead, it’s used to prevent electrical shock when someone touches the metal parts of an appliance or tool while working on a wet surface.

This happens because if the metal part touches the water while live current is flowing through it, electricity will pass through the water into your body and cause serious injury.

Extension cords come with two wires: a hot wire and a neutral wire. The hot wire carries electricity from the outlet to whatever device you’re plugging in, while the neutral wire returns it back so it can return to its source safely.

When you plug something into an outlet and touch both prongs of an extension cord, though, you can get electrocuted — even if it’s not plugged into anything at all.

This is because one prong could have more electricity than the other (or vice versa), so touching both could result in getting zapped. To prevent this from happening, extension cords should have at least three prongs: two for live current (hot) and neutral, plus one for ground (earth).

When Should You Use a Grounded Extension Cord?

Certain appliances and gadgets need to be grounded in order to function properly. For example, a power drill is designed to operate with a ground connection, so you’ll need an extension cord that has three prongs instead of two.

The following are some common electrical appliances that require grounding:

How Do I Know If My Extension Cord Is Grounded?

Not all extension cords are grounded, and some people don’t even realize it until they get shocked by an ungrounded extension cord while they’re working on their project around the house.

You should always check whether or not your extension cord is grounded before you use it or plug it into an outlet.

If you have a three-pronged extension cord, it is grounded.

However, the ground pin is merely a safety feature and doesn’t carry electricity. If you have an ungrounded adapter that fits into a grounded power outlet, you can plug your extension cord into it.

However, if your adapter is missing the ground pin or has only two prongs, it will not work with a three-pronged extension cord.

How Do I Know If My Power Outlet Is Grounded?

You may be able to tell if your power outlet is grounded by looking at its faceplate. In some areas, outlets are required by code to have one or more holes in their faceplates that allow you to see whether they’re grounded or not.

These holes are typically covered by decorative caps during installation but are visible when they’re removed later on.

There’s no standard size for these caps; they can vary widely depending on local codes and what type of outlet they’re covering up (including whether it’s a GFCI outlet).

The purpose of grounding an outlet is to prevent electrical shocks from occurring.

If you touch a metal object while standing on a wet floor, for example, and then grab the handle of an ungrounded appliance, you may receive an electric shock from your body’s natural reaction to the voltage difference between your feet and the appliance.

Grounding prevents this by breaking your connection to ground through a third wire in the circuit.

It’s always better to be safe than sorry. Even if you’re plugging a lamp into a ground socket, the extension cord should still be grounded as well—and vice versa.

If you can’t verify that your cord or outlet is grounded, call an electrician to come out and inspect the issue. That could save you several hundred dollars in the future when things go wrong.

Read our blog here about do extension cords expire or works permanently?