Extension cords are an absolute must-have around the house. This is especially true for older homes that don’t always have the easiest access to a power source. But, how actually safe are they? More importantly, can an extension cord trip your breaker? 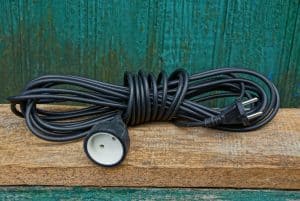 What Causes A Power Strip To Trip?

A breaker is the main power source in your home. Traditionally, this box of fuses is located on the lowest level of the home and is where all the power cycles through. But, did you know that even though they are meant to power your home, it has their limits?

While there are many factors that can cause a power strip to malfunction, the main reason why your power strip is tripping your breaker box is that you are simply overloading it.

But, how can you overload it with power if it is meant to be a power source? Believe it or not, it has little to do with the power strip itself and much more to do with what you plug into it.

Power strips can only handle a certain amount of power. This is often referred to as the “ampacity rating”. This measures the amps or electricity that guides the capacity rating for the power strip.

Power strips have a middle-range ampacity rating which means they are perfectly fine to use for things like lamps, phone chargers, and even a microwave.

However, appliances that use a great deal of power and electricity to function should defiantly never be plugged into a power strip.

For example, washers and dryers use up a great deal of power and will overload a power strip. Overloading a power stip will directly cause your breaker to trip.

Read our blog here about is my extension cord overloaded?

What Happens If You Overload A Power Strip?

Overloading a power strip means that you have gone over its limited capacity for power. In other words, you exceed its ampacity rating. A power strip can only allow for a very limited flow of power.

So, the first thing you may notice is that appliances plugged into a power strip that is overloaded may stop functioning properly. For example, maybe your phone that is plugged in will keep charging and stop charging over and over.

This is the first clue that your power stip is unable to move power evenly throughout the device.

Also, when overloading a power strip, you have activated its surge protector which will attempt to turn off all the power to the strip. This means that anything you have plugged into the power strip will not be receiving power and ultimately will turn off.

While it can be annoying to have to flip breaker switches or even change a fuse, it is actually there as protection for you and your home.

This is the final step in cutting off the power right at the main source to your power strip in an attempt to prevent it from overheating and catching fire.

Do Power Strips Power Off If Overloaded?

Whether or not a power strip will power off once overloaded totally depends on the type of power strip you have. While many power strips have a safety built-in that will switch the power off if there is too much power detected, some don’t have this feature.

This safety device is also known as a surge protector and is a switch located inside of the power strip. In order to trigger this switch, it has to have detected a larger amount of power than the power strip is capable of holding.

The main function of an internal surge protector is to evenly pass on the electrical currents through each power slot on the strip.

If the surge protector becomes overloaded, this means that there is too much electrical current being pulled from the power source and this will trigger the power strip to turn off.

However, if your power strip does not have a surge protector, you will not have this extra level of security and safety.

This way you can have peace of mind when it comes to keeping your home safe from electrical fires.

Do Power Strips Power Off Before Tripping a Breaker?

A power strip that has a surge protector located on the inside of the strip itself will power off before it has time to trip your breaker.

As mentioned, this is that extra level of defense when it comes to creating a dangerous situation caused by an overloaded power strip.

The idea is that a surge protector is your first level of defense. So, ideally, when a power strip senses that there is a too high level of electricity flowing, it will power down the whole device which means that it will also discontinue power to the devices you have currently plugged in as well.

But, how much power does it actually take to trip this sensor? Most traditional power strips can handle up to 15 amps of power at a time. Once the power strip exceeds those 15 amps, the surge protector will trigger and shut down the power strip altogether.

If the surge protector does not trigger, this means that electric currents will still be flowing through the strip and a dangerous level of amps. In theory, this will alert the power breaker box and will trigger the switch in the breaker to trip out.

Do Power Strips Have a Timer Set To Power Off?

Older and more traditional power strips do not have a timer that you can use to control the flow of power. However, that doesn’t mean that you can’t find one that has it.

These days there are “smart” power strips that work with your home’s Wi-Fi in order to create a safer form of power.

With a smart power strip, you can set a timer as well as control the limit of power right from your phone. This helps to give you more control over the power in your home as well as offers a great deal of peace of mind when it comes to the safety of your home and family.

Even if the power strip you have doesn’t have a timer, you can buy one. These timers will plug right into an outlet in your wall and will have an outlet that you can then plug your power strip or extension cord into.

This option allows you to use a power strip that you already have while still giving you the same control that you can expect from using a smart power strip.

However, I prefer to use a power strip that features its own timer switch. This way you can be very sure that you know exactly when and how much power is being used through your power strips at all times.

This will not only reduce the chances of overloading and tripping your breaker but will also allow you to set limits on how much power is used which can reduce your overall energy costs.

Read our blog here about do extension cords reduce power?

Power strips and extension cords are essential for any home. Whether your cords just can’t reach an outlet or you don’t have enough outlets to cover your power needs, a power strip comes in handy. But, by using one, you also have to accept the responsibility of using it properly.

Tripping a switch on your breaker is an easy fix with a flip of a switch or a quick change fuse. However, continuous misuse of a power strip can be dangerous whether or not your power strip has a surge protector. So, make sure to always follow the specific voltage limitations as well as check your power strip regularly for any damage. The best form of prevention is vigilance.