If you have ever wondered about the power loss that occurs when using an extension cord, you are not alone.

The question is often asked on electrical forums and there are many opinions and myths surrounding this topic.

In this article we will discuss how much power is lost in an extension cord and why this happens. 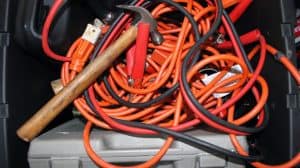 This reduction in voltage isn’t just a problem for your appliances — it can actually cause them to overheat or malfunction. The same goes if you use too long an extension cord with a small appliance like a vacuum cleaner or hair dryer (see below).

Extension cords are designed to carry electricity from one outlet to another — whether it’s from an outlet in one room to an appliance in another room or from an outdoor outlet back into the house for indoor use.

The longer the cord, the more resistance it has and therefore the more energy is lost when using it as compared with having just one plug-in at each end of the wire.

The longer the length of wire between plugs, the more heat is generated by resistance. This heat can cause fires if left unattended or underused equipment if you’re not careful about leaving things plugged in all day long or overnight when not in use.

If you use an extension cord with a device that draws a lot of power, it will draw more power from the outlet than it would if it were plugged directly into the wall.

That’s because the cord isn’t quite as efficient as a direct connection. In other words, it takes more energy to move electricity through the extension cord than it does through the wire that runs directly from the wall outlet to your device.

This effect is especially noticeable when you’re using high-power devices or appliances like microwaves, refrigerators or air conditioners.

The answer to this question is yes and no.

When you plug a device into an extension cord and then plug that extension cord into a wall outlet, the power coming from the outlet is exactly the same as if it were plugged directly into the wall.

The only difference between using an extension cord and not using one is that you’re adding more distance between your device and its power source.

However, there is one other important factors to consider.

How much power does it take to run my device?

This will vary depending on the type of device you’re using but most modern electronics draw very little power.

For example, a smartphone uses about 5 watts at full charge while an older laptop might use 20 watts or more. A desktop computer uses around 80 watts while running programs like Photoshop or playing games.

This means that even if you have a very long extension cord connecting your laptop to an outlet across the room, it isn’t likely to waste much power at all since so little energy is required by modern devices to operate them.

The longer the extension cord is, the more power it wastes. This is because the longer a wire is, the more resistance it has. Resistance causes heat which means wasted power.

The amount of resistance depends on how thick the wires are and how long they are.

So if you need an extension cord that is 50 feet long, use one that has 12 gauge wire (the thicker the gauge number, the thicker/heavier/thicker) and make sure it is not too long otherwise you’ll be wasting electricity by having too much resistance in your extension cord.

How Much Power Is Lost in an Extension Cord?

There are several factors that affect how much power is lost when using an extension cord:

How Does Temperature Affect Power Loss?

The temperature at which you use your extension cord affects its power loss. The higher the temperature, the more likely it is that you will experience a loss of power due to resistance.

This is because as the temperature increases so does the amount of resistance in a wire, which causes a higher level of energy loss.

The best way to combat this issue is to use an extension cord with good quality insulation and jacketing on it, which will help maintain a cooler temperature and reduce electrical losses across its length.

How Much Power Do Extension Cords Use?

The power consumption of extension cords is measured in watts.

The average residential household uses 800 to 1,200 watts of power per hour, according to the U.S. Energy Information Administration (EIA).

The result is that using a heavy-duty extension cord is more efficient than using a lightweight one with an identical length.

For example, if you plug an electric lawn mower into an outdoor wall socket that’s 100 feet away from your house — using a 10-gauge extension cord — it will draw 12 amps of current at 120 volts, which works out to about 1,440 watts of power consumption on average for every hour it runs continuously (12 amps x 120 volts).

Read our blog here about what does extension cord gauge meant & does it matter?

The Relationship Between Voltage, Amperage and Resistance

Voltage, amperage and resistance are all related. You can’t have one without the others:

The relationship between voltage, amperage and resistance is often explained by comparing electricity to water flowing through pipes.

In this analogy, voltage is equivalent to pressure — it’s what pushes electrons through a circuit — while amperage measures how much current is flowing through a circuit at any given time. Resistance represents how much friction there is in the pipe; it’s analogous to the pipe’s width or diameter in this case (as well as its length).

The relationship between voltage, current and resistance is the basis for most electrical calculations. Voltage is the difference in force (potential) between two points in a circuit. Current is the flow of electrons through a device or wire. Resistance opposes the flow of current.

The extension cord is an unfortunate necessity for many homeowners, but there’s no reason to use them when you don’t have to. If you can find a way to run your appliances without using extension cords, that would be ideal.

But if you need the cord for a short term solution, know that there are ways to make sure it doesn’t waste electricity.

Check out our blog here about do extension cords need to be grounded?