Extension cords are an accepted and ubiquitous part of modern life in technologically advanced parts of the world.

Extension cords help you access electrically-powered devices without being right next to an outlet, allowing greater convenience and ease of use for any appliance that needs to be plugged in to work.

Given how useful and widely used they are, then, it follows that using extension cords safely is extremely important to avoid accidental injury and property damage.

If you’re not 100% sure that you’re using extension cords safely, then keep reading, because we’re about to arm you with the understanding and knowledge to do just that. 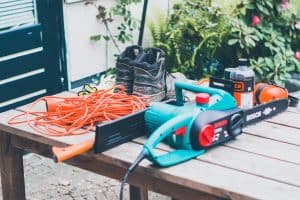 There’s more to consider than you might think when it comes to extension cord safety; these are high-capacity live electrical wires we’re talking about after all.

Thankfully, though, much of what you need to know is fairly straightforward and intuitive, and a few easy-to-understand rules and guidelines will serve you well whenever you’re working with extension cords.

For a more detailed set of guidelines, please visit this page to learn more.

While following the five guidelines above will empower you to safely use extension cords in most situations, sometimes specific questions and concerns apply that may not be covered by these rules.

With that in mind, let’s take a look at some common concerns when using extension cords and give you a few answers that will make putting safety first even easier for you when it comes to extension cord use:

Is it Safe to Plug Extension Cord into Another?

While startlingly common, doing this poses a serious risk of an electrical surge, injury, and property damage; do NOT daisy-chain extension cords.

There are a few reasons for this. The most important one involved amperage limitations.

Effectively, every power strip, extension cord, and electrical outlet is rated for a certain maximum amperage that it can withstand.

With most everyday use—especially if you follow the third rule above and check your amperage limits—this isn’t a problem, as each individual cord/outlet/etc is unlikely to have this limit exceeded.

However, when you plug multiple extension cords together, this changes the amperage limit of the combined cords and makes it much more likely that the appliance you plug in at the other end will exceed this new limit.

Is it Safe to Plug Extension Cord into Surge Protector?

This one isn’t the biggest no-no on the list, but it’s still a bad idea, mainly because it makes it a lot harder for the surge protector to do its job.

This delay may be long enough for the heat to build to sufficient levels to start an electrical fire despite the surge protector.

For this reason, please do not plug extension cords into surge protectors.

Is it Safe to Leave Extension Cords Plugged in Outside?

While it’s not the most dangerous thing in the world, you probably shouldn’t be leaving extension cords plugged in at all, but especially not outdoors.

Extension cords are primarily intended for temporary use, such as, say, to power an electrical tool while it’s in use; when you’re all done, you unplug and pack up both the tool and the cord.

Furthermore, even if you’re using an outdoor-rated extension cord (check for the “W,” and do NOT use an indoor-rated cord outdoors, more on that below), leaving it outside all the time subjects it to gradual wear and tear.

Put another way, if you leave an extension cord outside, it might be fine right now, and tomorrow, and the next day…but eventually it is going to break down from continual exposure to the elements, and at that point, you have a potential fire hazard on your hands.

Check out our blog here about what does extension cord gauge mean & does it matter?

Is it Safe to Bury Extension Cords?

Typically, no, it is not safe to bury extension cords.

You may be aware power lines are sometimes buried, and reason that you should be able to do the same with an extension cord.

The problem is that extension cords are not designed to be buried, and if you do not allow them open-air to stay cool, they can overheat and melt their insulation, causing all kinds of very dangerous problems.

If you want to bury a power cord, you need to find cords that are specifically rated for underground use; and even then you’ll probably need professional help installing them.

Is it Safe to Use Extension Cords in the Rain?

Indoor-rated extension cords should NEVER be used outdoors at all, and especially not in the rain.

But what about outdoor-rated cords? Outdoor extension cords do have a water-resistant coating that can withstand a reasonable amount of moisture.

That being said, while some water exposure is okay, there are a few caveats and important safety precautions to consider.

Further, you shouldn’t just leave a cord in the rain indefinitely; while short-term use in wet conditions might be alright, do not leave your cord unattended in the rain.

So if both ends of the extension cord are sheltered from water, and you’ll only be using it for a short time in light rain, you’ll probably be okay.

But exercise all due caution, keep those ends dry, and do not use the cord for any longer than necessary.

Is it Safe to Use Old Extension Cords?

It depends! An older extension cord may still be perfectly safe, or it may be best to replace it. This depends on a few things.

Firstly, check to make sure there is no damage to your cord. If the cord feels loose, or if there is a crack or other damage to the insulation, throw it away and get a new one.

If the cord feels hot to the touch when plugged in, you should also replace it; this is a sign that the cord is being used above its rated limits, or has been damaged by overuse in the past.

Furthermore, if the older cord lacks a ground (the third, large prong under the two top prongs), your safety concerns would be best served by replacing it with a new, grounded cord.

If your old cord passes all these tests (it’s not damaged, doesn’t feel hot in use, and has a ground), then it might still be perfectly safe. If you have any lingering concerns though, it never hurts to replace an old cord just to be on the safe side.

Is it Safe to Tape an Extension Cord?

This depends on what you’re doing with the tape!

If the insulation of your extension cord has broken and you’re using electrical tape to repair the tear, STOP and throw away the extension cord; this is not safe and the broken cord should be discarded and replaced.

But what if your cord is undamaged and you’re just using tape to stick it to a wall, or something like that?

Well, that’s a bit more complicated. In theory, you might be alright, but there are many things to keep in mind here, and it’s very easy to accidentally create an overheating issue (and therefore a fire hazard) where tape and extension cords are involved.

Basically, you’ll want to pay careful attention to the heat limits of the cord, the insulating power of the tape, and other factors, and you might want the advice of an actual expert on this one.

So suffice to say it’s too complicated to give you a satisfying answer within the scope of this article. Just be careful when it comes to taping extension cords, and if you’re unsure, err on the side of caution and don’t do it.

Is it Safe to use Indoor Extension Cords Outside?

Absolutely not! Do not do this; extension cords are rated for different uses for a reason.

Indoor-use extension cords simply do not have the added insulation, weatherproofing, etc to handle the outdoors, and subjecting them to outside conditions is practically inviting an electrical fire.

Read our blog here about do extension cord need to be grounded?