A hot extension cord—or any warmer-than-it-should-be electronic device, for that matter—is never a comforting thing to discover, and should rightly set off some alarm bells in your head.

But what exactly causes extension cords to overheat? How can you tell the difference between different potential causes?

And most importantly, what should you do about it?

To answer all these questions and more, keep reading because today we’re diving into the world of overheated extension cords: what causes it, when you should be worried, and what you should do about it.

Here’s Why Your Extension Cord Is Getting Hot:

The most common reason for overheating is an overload. This means that too much current is flowing through the wires and they are getting hot. Extension cords can handle only a certain amount of current depending on how thick their wire is and how long they are. 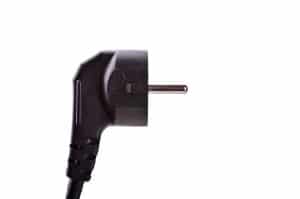 Is it Normal for Extension Cords to Get Hot?

Well, this depends on what you mean by “normal.” If by “normal” you mean “does this happen often?” then the answer is yes, it’s fairly normal to hear about hot extension cords.

But if by “normal” you mean “should this happen in normal use within established safety rules?” then the answer is no, no it should not.

From this, it follows that the only reason hot extension cords are “normal” by the first definition is that it’s pretty common for people to misuse extension cords in ways that are not safe.

If this revelation concerns you, that’s good, because armed with this knowledge, you’ll be able to avoid some shockingly common safety mistakes and reduce your potential exposure to risks like electrical fires and surges.

Why Would an Extension Cord get Hot?

There are a couple of reasons why an extension cord might be warm or hot to the touch, and neither of them is good.

The first, and easiest to explain reason, is that the insulation of the cord has worn out and it can no longer contain the heat of the electrical current in the cord.

If this is the case, you need to throw away your extension cord and get a new one; a damaged cord is an electrical and fire hazard and should not be used.

Now for the other reason extension cords can get hot, which requires a slightly longer explanation.

All extension cords (and electrical cords in general) are rated for a certain level of electrical charge they can handle, often listed in amps.

Every device you connect the extension cord to draws power in the form of an electrical current, measured in amps.

The electrical current generates heat as it moves through a conductive material (like the metal wires under the insulation in an extension cord). The higher the amperage, the more heat it generates.

So if you plug in a device that draws more amps than the cord can handle, it will overheat as the insulation struggles to contain the heat being generated by the too-strong electrical current running through it.

While a single high-amperage device could theoretically overwhelm a lower-rated extension cord, the more common scenario is that you have several devices plugged in at the other end of the cord at the same time.

The combined amperage of multiple devices can quickly outstrip the level of current that your cord is rated to withstand, causing the heat generated by this overloaded current to exceed the insulating power of the, well, insulation.

This situation is more dangerous than it might seem at a glance because just feeling a little warm to the touch is only the beginning.

If you keep using an extension cord with more amps of current than it’s rated for, the heat can keep building and growing more intense, until eventually the insulation is melted, and exposed wires create an extreme shock and fire hazard.

How Do I Know if an Extension Cord Is Overloaded?

Well, the fact that it’s hot is a pretty big clue!

That said, there are other reasons for an overheating extension cord, as we’ve already discussed, but frankly, if your extension cord is hot but isn’t overloaded, you need to throw it away and replace it, because this indicates damage to the insulation.

So to tell the difference between an extension cord that’s hot because of fatal damage, and one that’s hot because you’re overloading it, let’s talk about how you can figure out what kind of load your cord can handle and whether you’re exceeding it or not.

Check out our blog here about can you plug extension cords together?

How Do You Stop an Extension Cord from Overheating?

When answering how an extension cord could get hot in the first place, we mentioned two possible reasons: damaged insulation and overloaded current.

Now, if your cord is warm because the insulation is damaged, the solution is very simple: throw it away and buy a new one. It cannot be repaired safely and must be discarded and replaced.

If your cord is being overloaded with more current than it can handle, however, then the solution is to stop overloading it.

How to go about this requires determining how many amps your cord can handle and how many amps the devices you’re using require, and making sure the former is larger than the latter.

Let’s take a look at how to figure this out in the next section.

How Many Items Can You Connect to an Extension Cord?

Honestly, this is asking the wrong question. There is no magic number of devices that is or isn’t okay, because each device has different power requirements.

So the question you should be asking is “how do I figure out what my devices’ power requirements are, and make sure my extension cord can handle that requirement?”

And to answer that question, we’re going to need to define a few terms first.

So far, we’ve thrown around the term “amps” a lot without really defining what it means. And to give a comprehensive answer, we’re going to have to define a couple of other terms as well, at least in simple terms.

So without getting too technical, there are three basic units for measuring electricity that you’ll hear often: volts, watts, and amps. There are others, but these three will suffice for the task at hand.

Now, while your cord is rated for a certain number of amps, devices are often classified by their wattage requirements. This can be confusing until you understand what a watt actually is.

Now, how do we actually apply those definitions to figuring out how many devices we can plug into our cord? Let’s take a look.

The power requirements of your tool should be clearly listed on the device itself, and include the number of amps it requires. That’s the easy part.

The slightly harder part is matching this requirement to an extension cord. This is slightly more complicated because the cord’s ability to carry voltage is affected by two variables: length and gauge (width).

The maximum amperage may also be listed on the extension cord packaging, but if it’s not or if you’ve long since discarded said packaging, charts like the one we linked to are quite handy.

In any event, if you are using multiple devices, remember that you must add together the amps listed on every device!

If the total amperage of your devices exceeds that of the extension cord, STOP! Disconnect devices until the total is equal to or less than the maximum amperage of the cord.

If you still need those devices that you just unplugged, you’re just going to have to find another solution, like a separate extension cord plugged into another outlet.

While this may seem less convenient, it’s far preferable to putting yourself at risk of dangerous electrical shock or burning your house down because you overloaded your extension cord.

Read our other blog here about do extension cords need to be grounded?