These days, the seemingly simple task of picking up a baby monitor for your new or expected child is a lot more complicated than it used to be.

With Wi-Fi baby monitors, two-way talk features, cameras, and much more all on offer, it’s a stark contrast from those old-fashioned audio-only radio monitors of yesteryear—though you can still buy those, too!

If you’re confused by all the options, and especially if you’re wondering whether Wi-Fi monitors, in particular, are worth the hype or not, then read on as we dive into exactly that subject today.

Traditional baby monitors broadcast over the radio waves, which means they don’t require Wi-Fi and work anywhere there’s a clear signal. But this also means that the range is limited and can be unreliable. There are also ones that connect to your smartphone using Bluetooth. 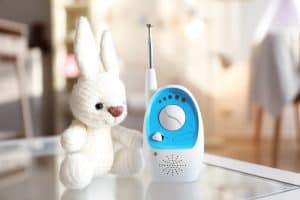 Time was, the only kind of baby monitor that existed was non-Wi-Fi. Then as now, these simpler devices use the same technology as walkie-talkies; transmitting radio signals between the monitor and receiver to communicate.

This can even be true of non-Wi-Fi video baby monitors, which send both their video and audio feeds via radio waves to the receiver unit.

Keep in mind radio waves are still a very ubiquitous and important technology for modern life; even your Wi-Fi router uses a form of radio waves to broadcast the internet signal throughout your house!

So Wi-Fi and non-Wi-Fi monitors can actually use very similar technologies to communicate.

The difference is that a Wi-Fi monitor first sends a signal to your Wi-Fi router, which then uses the internet to communicate to whatever receiver devices are authorized to receive the feed.

A non-Wi-Fi monitor, by contrast, simply sends its signal directly from the monitor unit to the receiver unit, without using the internet as a middleman.

How Do Non-Wi-Fi Baby Monitors Connect?

When you set up a radio-based (non-Wi-Fi) baby monitor, you may first have to synchronize the devices to each other to make sure they’re connected properly.

This is generally done by turning on both the monitor and receiver units, then pressing a button of some kind that prompts the devices to “find” each other by sending radio waves on the same frequency.

The exact process will vary from one model to another, so follow the instructions included with your unit.

Once it’s connected, your monitor will be able to communicate with your receiver via radio waves, within the specified range in your particular product’s user manual or instruction booklet.

Note that the range is usually similar—sometimes even slightly better—to the range on a Wi-Fi router, because as we covered, both devices are using similar technology to send wireless signals.

Certainly not! Wi-Fi and non-Wi-Fi monitors have different features and different reasons why certain individuals might choose to use them or not, but neither is inherently superior to the other.

What Wi-Fi baby monitors are better at is giving you an unprecedented range: any location with Wi-Fi is somewhere you can theoretically check on your baby. As long as you have your receiver on you, or a smartphone with the relevant app and credentials to access the feed.

This means not only can you make sure your child is alright no matter where you are—as long as where you are has Wi-Fi—but far-flung grandparents and other family and friends who might want to meet your baby sooner than they’re able to visit will be able to do so through the monitor.

On the other hand, non-Wi-Fi monitors are superior when it comes to digital privacy and security.

That is to say, Wi-Fi monitors are much easier to hack, and can be theoretically hacked from anywhere in the world.

Non-Wi-Fi monitors, while technically possible to hack, are more difficult, and can only be hacked within the range of the monitor itself; the hacker would have to either be your next-door neighbor or otherwise be very close to or in your home to even be able to attempt a hack.

It’s also worth noting that even without the stress of worrying about potential hacking, some parents report that the ability to check on their baby from anywhere actually increases stress in the long run, counterintuitively.

Basically, the ability to check on your child from anywhere can create a sort of feedback loop, where you feel the need to check on them more and more because you can, just to be sure.

For this reason, some parents prefer to use non-Wi-Fi monitors—if they use any monitors at all—and just make sure they implicitly trust anyone they allow to watch their kid.

After all, there’s no need to constantly check on your baby when you trust your babysitter absolutely.

Read our blog here about do baby monitors need wi-fi to work?

What Type of Baby Monitors Are Most Used?

We were unable to find any exact statistics on how many parents choose Wi-Fi over non-Wi-Fi monitors these days, but we have noticed some broad trends.

That being said, a few years back there was a bit of a scare about how easily hackable Wi-Fi baby monitors actually are, which has led many parents to abandon them in favor of simpler technologies, or even to simply use no monitor at all.

Since then, Wi-Fi baby monitor manufacturers have broadly stepped-up security, and these devices are less vulnerable than they were, but importantly, still more vulnerable than non-Wi-Fi monitors.

So these days, it seems like it’s a bit of a wash. Now that more parents are aware of the security vulnerabilities of Wi-Fi monitors—even with the increased security measures we’ve seen—some no longer wish to use them, while others continue to do so for the convenience they offer.

What Are the Pros and Cons of Non-Wi-Fi Baby Monitors?

To neatly tie together everything we’ve written so far, we’ve prepared pros and cons lists for you to more easily assess whether Wi-Fi or non-Wi-Fi baby monitors are right for you—assuming you decide to even use a monitor at all.

If you’re still uncertain after reading everything above, check out this in-depth look at the pros and cons of each option, and best of luck in your parenting adventure!

Read our other blog here about how do wi-fi baby monitors work?