OBS is a powerful tool, especially for podcasters. Aside from it being able to help you manage your live streams, you can also use it to pre-record your content.

But can you use it as an alternative to recording audio-only content instead of installing a dedicated software for audio recording?

Here’s If OBS Can Record Audio Only:

OBS Studio can record audio only for any game or application that you’re playing on your PC. If you want to record your voice only while playing a game, then follow these steps; Open OBS Studio and go to Settings > Output Mode > Audio Only. Click Apply or OK button to save settings changes. 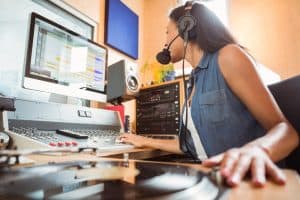 In fact, you can even use a different audio source for each device in your scene. For example, you could have one device with a microphone and another without. This way, you could separate the audio from different sources into different audio tracks when editing them later on.

How Do You Configure OBS Only To Record The Sound?

Setting up OBS for audio-only recording is simple. You can run the Auto-Configuration Wizard, testing your computer and recommending settings for smooth performance. If you have already run OBS on your computer before, skip this step.

But if you need to run it to be sure, you can open it under the Tools menu.

Once you’ve set up your audio sources, you can now test them. Make sure everything is routed correctly under the Output menu in the Settings.

How Good Is The Quality Of The Sound Recordings?

The sound quality depends on the input sources. While you can get decent audio with your laptop microphone, you can get better quality using a dedicated USB condenser microphone.

You need to experiment with different settings, including distance from the microphone, to get good results using OBS.

Another factor to consider when recording, whether with OBS or other recording software, is the environment. If the room or place where you are recording has too much noise, it will come out in the recording.

And even if the room is quiet, if it isn’t appropriately treated for better acoustics, you also pick up the room’s acoustics.

You also pick up the reverbs or echoes inside the room, which can ruin a recording.

If you’re looking to get better sounds, always remember to get it right at the source.

Where Does OBS Store The Sound Files?

OBS stores the recorded sounds on a local folder, with the option to save them on the cloud. You can change these settings under the Output menu. Now, it’s not recommended to store on the cloud since the stems, or raw audio recording files, are sensitive to file location.

One wrong move can mean your recording is not matching at all.

How Much Storage Do You Need For The sound files?

The amount of storage you need for the sound files depends on your recording quality. A one-hour wave file recording can take up 1 GB of space at 24-bit and 48KHz. A higher rating means higher settings too.

If you have multiple audio recording sources, you will need more space.

Check this blog of mine about can OBS record multiple video tracks?

How Many Tracks Can OBS Handle?

OBS can handle up to six tracks for recording, which is ideal for those looking to record a podcast.

However more recording will require more devices and a more involved setup.

What Are The System Requirements Of OBS?

If you plan on using OBS, here’s what you need:

Do People Use OBS For Recording Audio Only?

OBS isn’t the usual choice for audio-only recordings, considering its limitations, particularly with the number of tracks you can have.

It’s a good choice for podcasters, particularly those who have simultaneous video releases with the podcast. Although the number of tracks is limiting, those looking to record live performances can also benefit from OBS.

If you are a music producer, arranger, or musician looking to record music, OBS won’t be a good choice, as you only have six tracks available. You may want to look for better alternatives.

What Could Be A Better Alternative?

If you are looking at alternatives to OBS for recording audio-only, you need not worry as there are plenty of Internet options that you can use. Many of these softwares are free and are ideal for those who want free audio recording software.

First on the list is Audacity. Like OBS, Audacity is free and open-source. It’s the choice of many podcasters and even some musicians who want a no-frills option for recording audio.

It also has plugins, like many recording software on the market.

But, unlike OBS, Audacity has unlimited tracks that you can use in a recording. It also allows you to export directly to mp3, with the help of the add-on that is also free. Audacity is also available on Mac, Windows, and Ubuntu.

Garage Band is a preferred choice for Mac users. It’s free for anyone running the Mac OS and contains many powerful features that benefit music and podcast projects. If you’re willing to experiment, you can even use the virtual instruments to create stingers for your podcast.

Like Audacity, Garage Band has unlimited tracks available for recording audio. You can integrate your plugins to help you process the audio, and there’s also an option to export content to your iTunes library. Unfortunately, Garage Band is only available for Mac users.

If Mac users have Garage Band, Windows users have Cakewalk by Bandlab.

Cakewalk is also a powerful recording software that features studio-grade features. It features plugins for any record application and is based on the famous Sonar software that Cakewalk is known for. Cakewalk also features unlimited track recording, so you can have as many tracks as your computer can support.

You might want to skip Cakewalk as it’s not as straightforward compared to Audacity if you’re a beginner. But if you are willing to have patience, then Cakewalk is worth looking into. Note that Cakewalk is only available for Windows users.

While the free version has many powerful features, it cannot use third-party plugins, unlike Cakewalk.

It’s also worth noting that Studio One Prime is also available for Windows and Mac users. One notable feature of Studio One, in general, is how it saves on resources by turning off plugins that are not active at a particular time.

If you’re on the lookout for a USB microphone, you might want to consider the Presonus Revelator Dynamic or Revelator Condenser. So what do these microphones have to do with Studio One Prime? You can get the software’s better version, Studio One Artist, for free. That’s a $99 software, which is a sweet deal.

You get more features with Studio One Artist, including compatibility with third-party plugins.

Now, Adobe Audition isn’t free, but it’s worth looking into for audio recording.

Audition is an industry-standard when it comes to recording. From its humble beginnings as Cool Edit Pro, it has become one of the most powerful audio recording software today.

Like most of the software listed here, Audition makes unlimited tracks and is available for Windows and Mac users.

But what makes Audition stand out among other recording software is how you can integrate it with your cloud storage. You can save and sync your work to the cloud to collaborate with your producers.

Audition also features its library of plugins and is compatible with third-party plugins. A monthly subscription for Audition costs almost $28, but you can get it cheaper if bundled with other Adobe software.

Reaper is also not free but is one of the cheapest recording software, starting at $60. It does, however, come with a 90-day trial that’s more than enough time to give you an understanding of recording.

This software is compatible with Windows and Mac and features unlimited tracking. You also get access to plugins and use third-party ones for more options. Reaper is an excellent software to consider if you have a small amount to spare for a recording software.

OBS is a good option for recording if that’s what you have available as of the moment.

It does the job, despite its limitations.

But if you have the opportunity to download a free recording app, then consider the recommendations listed. You can do more with these apps, which can even sharpen your skills in recording and post-production.

Read our blog about can OBS stream & record at the same time?