The terms “power strip” and “surge protector” get thrown around and conflated so often you’d be forgiven for thinking they’re actually synonyms.

However the truth, as is often the case, is more complicated.

Surge protection and power strips are definitely frequently-overlapping subjects, but they’re not literally the same thing.

So if you’re curious about untangling the truth from these oft-conflated terms, keep reading as we dive into the world of power strips and surge protection. 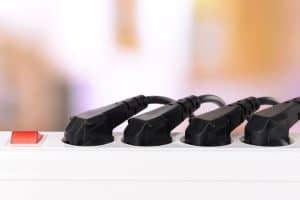 Do All Power Strips Have Surge Protectors?

From the above definitions, we can gather that for something to be called a power strip, all it has to do is provide extra electrical outlets; surge protection is optional.

Part of the reason for these two terms being so commonly conflated is that surge protection has become a more and more common feature in power strips on the market today.

While you can still find non-surge-protected power strips for sale, they’re less common than they used to be, so many people assume “power strip” and “surge protector” mean the same thing.

And well, they almost do in today’s market, but it’s important to remember that there’s a big difference between “all” and “almost all,” and that difference can be costly if you assume your power strip is protected from surges when it isn’t.

Remember to check the packaging of any new power strip before you buy; if you need surge protection, don’t buy a strip that doesn’t specifically say it has it!

What Is the Difference Between Power Strips and Surge Protectors?

Well, sometimes there is no difference because the categories overlap. But sometimes, there is.

You can think of it something like the difference between a turtle and a tortoise: all tortoises are turtles, but not all turtles are tortoises, because “turtle” is an umbrella term, and “tortoise” is one type of turtle.

The difference here is more important than it might immediately appear because power strips that don’t have surge protection can actually increase your risk of surges if not used correctly.

This is because while most appliances are designed not to draw more power than is safe from a single outlet when you use a power strip, you’re enabling several devices to be plugged into the same outlet through the strip.

For this reason, if you plug in several high-energy devices into a power strip, you can over-tax the outlet by trying to draw more power than it’s able to safely give.

If your power strip has a surge protector, it can shut off in this case to protect you and your appliances, but if the power strip you’re using lacks this protection, you could be in trouble.

Power strips without surge protection can be used safely, but we’d recommend limiting them to devices with a low power draw, like phone chargers.

Anything that draws a lot of power, like a TV, computer, etc, etc, should be plugged directly into a wall outlet or into a surge-protected power strip.

What Do Power Strip Surge Protectors Do?

Surge protectors do what their name implies: they protect you and your appliances from electrical surges.

In the event an electrical storm, power outage, or unpredictable behavior by your power company causes a power surge, your surge protector is designed to detect the sudden increase in voltage and shut down.

If the surge is sudden and extreme, the surge protector will cut power to anything plugged into it.

In the case of minor fluctuations in voltage, the surge protector can actually help ensure an even and steady power supply by redirecting excess energy so that your appliances only get exactly what they need for optimal functioning.

Think of it as a pressure valve, but for electricity: if the amount of energy going through is just right, it lets it flow. If there’s a little too much, it redirects the excess and passes on only what your devices need.

And if it’s way too much, the “valve” (actually a device called a Metal Oxide Varistor, or MOV) closes and doesn’t let any energy pass at all, to protect your devices from a surge.

A large number of electrical devices actually have surge protection built-in, and every additional layer of protection can help keep you and your devices as safe as possible.

Surge protectors can protect you and your devices from a wide variety of surge-causing events including electrical storms, outages, and so on, but please note that they are not guaranteed to protect against a direct lightning strike to your power lines.

Mercifully, those kinds of direct strikes are very rare, and surge protectors do protect against surges caused by the more distant lightning strikes that are most common in your average thunderstorm.

What Other Power Supplies Have Surge Protection?

In fact, all new homes these days come equipped with Ground Fault Circuit Interruptor (GFCI for short) outlets, which include a form of surge protection built into the outlet itself.

GFCI outlets can detect power surges and a variety of unsafe conditions which cause them. Much like a surge-protected power strip, GFCI outlets will shut off and stop providing power if a surge is detected.

Similarly, many common appliances, especially but not limited to bathroom appliances like your hairdryer, come equipped with an Appliance Leakage Circuit Interruptor, or ALCI for short.

ALCIs work very similarly to GFCI outlets and power strips with surge protection: they shut off if a surge is detected.

The main difference is that ALCIs will also shut down under certain circumstances that might cause a surge, potentially before the surge actually happens.

For instance, if your hairdryer gets too hot, or if you drop it in a bathtub by mistake, the ALCI will immediately shut it off when the heat/moisture is detected over a certain amount.

Standalone surge protectors (that aren’t built into a power strip, an outlet, or an appliance) also exist, that you can attach high-energy appliances to in order to protect them from surges.

These standalone protectors are fairly specialized and not something you’ll generally need to think about in everyday household power management, but they do exist for situational use.

How Do You Know if Your Power Strip has Surge Protection?

With all the fuss over whether a power strip is of the surge protector variety or not, it definitely behooves you to be able to tell the difference.

If you’re shopping for a new power strip, check the packaging! If the power strip is surge-protected, it should say so on the package. If it doesn’t say one way or the other, assume it doesn’t have it!

If you’ve already thrown away the packaging and didn’t check, or for some other reason are in possession of a power strip whose packaging and label you didn’t get to look at, there are other indicators of whether surge protection is present or not.

If your power strip is surge-protected, it should have a little LED light on it somewhere labeled “surge” or something similar.

If your power strip does not have this light, then it either doesn’t have surge protection, or its protection is so cheap the manufacturers didn’t bother adding the little light.

Check out our blog here about can power strips be plugged into extension cords?