You may well be familiar with the common power strip. It’s probably allowed you to plug in all manner of devices and keep them powered on.

However, keeping your devices on all of the time uses energy and therefore you may be wondering whether it’s time to upgrade to a smart power strip, but before you do it’s important to understand whether they really work.

A smart power strip should save you money and reduce your energy consumption. Smart power strips provide energy to the multiple devices that are connected to them. They can detect when a device enters standby mode and can shut off power to them when they do. 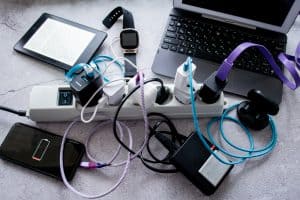 What Is A Smart Power Strip?

A smart power strip has all the convenience of a normal power strip, but with the added bonus of allowing you more control over what is being powered at any one time.

Power strips give us the ability to keep a selection of electronic devices and appliances in close proximity to one another.

This is especially useful for devices that work together and must be connected to each other.

For example, your computer, sound system, monitor, and printer, may all need to be connected together in one place, such as your office desk.

However, with a traditional power strip, once you’ve shut down the devices that are connected to it, you may find that they are still on standby mode.

Have you ever killed the lights in a room only to find that there is a multitude of little LEDs still blinking in the darkness? These lights signify that the devices are in standby mode and if they’re in standby mode it means that they are still using energy.

This is where smart power strips set themselves apart from traditional power strips because they can ensure that the extra energy consumption due to standby mode is eliminated by shutting off power to specific devices.

A smart power strip’s ability to detect power changes in your devices really sets it apart from older power strips.

This feature is what allows your smart power strip to kill the power to devices that no longer require it.

You may find that some power strips have outlets that are not designed to be monitored and these are perfect for plugging in devices that you want to ensure have continual power, such as an alarm or phone system.

Previously, we mentioned the idea of ‘grouping’ devices by way of a smart power strip, to explain this idea in more depth let’s use Bits Limited Smart Strip LGC3 as an example of how ‘grouping’ can work:

There are even smart power strips that go a step further.

Remember the computer setup we were talking about earlier – computer, monitor, printer, speakers, etc? Well with this smart power strip all you would need to do is walk up to your desk and all of those devices will switch on. Walk away, and they’ll power down.

As you can see, there’s a big difference in what smart power strips can do in comparison to your everyday power strip.

So, as we’ve seen, ‘grouping’ devices together and having them be ‘slaved’ or ‘controlled’ by a master device – such as a TV set or computer – sounds pretty convenient.

However, there are issues that can crop up when the control device that is being monitored does not trigger the smart power strip to cut power to the connected accessories.

This only happens when the device that is connected to the monitored outlet on the smart power strip still draws power even when switched off.

For example, some users have found that their particular setup does not work with a smart power strip.

Say somebody has a laptop plugged into the control/monitor outlet, but when they switch it off it still draws power (in order to charge the laptop’s battery) then the only way for the accessories to automatically power down is to unplug the laptop’s power cord.

Only once the laptop has no power, or very low power, will the smart power strip switch off the printer, speakers, etc.

As the writer from Green Building Advisor points out:

“I realized that it [the laptop] was probably drawing enough power to confuse the strip into thinking that it was still on. I unplugged the laptop cord, and the switched outlets turned off in a few seconds.”

This goes to show that smart power strips work well depending on the particular setup and what device is plugged into the control outlet.

Read our blog here about do power strips have surge protectors?

Can Smart Power Strips Save Money On Electrical Bills?

That wasted energy that your devices are using whilst in standby mode all adds up, and of course, increases your electricity bill.

The term for this wasted power is called ‘vampire load’ and it refers to the continual drain that certain devices make whilst being in a low power mode.

PaylessPower.com estimates that devices on standby mode could:

With the handy features that smart power strips employ you can make certain that the devices that you want off (and we mean really off) have their power supply cut when they don’t need it.

However, it is worth pointing out that you can combat the problem of ‘vampire load’ by simply unplugging devices or using a master switch to sever power to your devices that enter standby.

Are Smart Power Strips Safer Than Regular Ones?

One of the main reasons people purchase smart power strips is because of their ability to reduce wasted energy, help save the environment, and reduce their bills.

However, safety may also be a valid concern, too.

Smart power strips often have surge protection capabilities as standard, meaning they can protect your connected devices from damage caused by momentary spikes in the voltage supply.

These devices will have more protection than if they were plugged into a power strip without surge protection.

Although your devices will be safer, the surge protector inside a smart power strip does not eradicate all safety concerns.

It is definitely worth being aware of the fact that even smart technology comes with its own risks and limitations.

When smart power strips with inbuilt surge protection are misused, they also have the ability to potentially cause electrical fires.

Check out one of our blogs here about are cheap extension cords safe?

What Electronics Can You Plug into a Smart Power Strip?

When it comes to guidelines on what type of electronic devices you can plug into a smart power strip versus a normal power strip, there really isn’t much difference.

Even with power strips becoming a staple tool in the modern home, there are two main safety elements that many individuals are not actually aware of:

As convenient as smart power strips may be, the temptation to plug just any old electronic device into them should always be avoided.

Here are some examples of some low-power electronic devices or gadgets that are safe to plug into a smart power strip:

To gain the most out of your smart power strip, try plugging in devices commonly known to contribute to your ‘vampire load’ such as television sets.

It won’t take long for you to witness how much energy can be saved.

That being said, it is not advised to plug too many gadgets into one power strip as it can result in overheating or ‘overloading’. High-power devices can also have the same result.

Overloading is when the electrical current that the power strip is conducting exceeds its maximum amperage rating.

If you have to connect multiple devices to one power strip, total the wattage needed for these devices, then ensure the power strip has an amp rating that can handle that total.

You can also check the amp rating on your device to make sure the power strip is suitable.

The main reason to avoid overloading is that when a power strip is overloaded, costly damage can be done to either the power strip or the electronic item plugged into it.

In a worst-case scenario, there is also an increased risk of fire.

Smart power strips may have overload control, but when it comes to fires, it’s better to be safe than sorry.

There are certain heavy-duty devices that should never be connected to a power strip – whether it’s smart or not. Such devices are:

Similarly to regular power strips, if you join more than one together at a time you can risk overloading the circuit and potentially causing a fire.