Power strips are extremely handy. They help keep our devices in close proximity and connected to the same outlet.

However, there are safety concerns when using power strips and that is why anything that reduces the risks will always be welcome.

In this article, we look at whether all power strips employ circuit breakers and what exactly they do to reduce the risks of using power strips.

Here’s If All Power Strips Have Circuit Breakers:

Most power strips should have a circuit breaker. Power strips with this added component prevent the flow of electricity when an excessive amount of current has been detected. Excessive flow is usually created by an overload, your power strip protects itself and all of the connected devices. 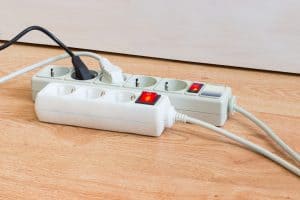 What Does the Circuit Breaker Do in a Power Strip?

Circuit breakers are electrical safety mechanisms, designed to protect an electrical circuit from either:

They are an essential element for safety in both our homes and in our work environments because of their ability to automatically detect and shut off an electrical current when it becomes dangerously high.

This is vital in order to prevent damage to electronic equipment.

It also helps prevent any fires from starting due to faulty wiring.

Therefore, considering the fact that power strips extend the electrical current from the wall socket to your devices, it is important (but not essential) for them to have inbuilt circuit breakers.

It is easier to understand the significance of circuit breakers in power strips, or even permanent wiring, once you have taken a look at how electricity is distributed:

The two main components of an electrical circuit in a building are:

An alternating current is produced when this circuit is closed, thus, safely providing electricity for all your household needs.

The term ‘alternating’ may sound like a current that fluctuates, but it is actually incredibly stable.

The hot wire and neutral wire should never directly touch, and dangers can arise when they do.

This can happen from either shoddy building work or a faulty device fusing them together.

This is where circuit breakers are crucial; they can detect abnormal power levels and in turn shut off the power directly.

They are particularly useful in power strips by being a preventative measure against overloading.

‘Overloading’ is when a dangerous amount of current passes through an electrical wire. In a power strip it can occur when:

Overloading can produce costly damage to both your devices and the power strip itself.

In a worst-case scenario, overloading can result in dangerous fires.

Power strips with inbuilt circuit breakers are therefore a much safer alternative compared to those without because if overloading were to happen, the current will be stopped before any lasting damage occurs.

How Do You Tell if Your Power Strip Has a Circuit Breaker?

If a power strip does have a circuit breaker it may be evident in the form of a switch on the end closest to where the wire is connected. This can double as an ‘ON/OFF’ switch.

These switches also commonly have inbuilt red LED lights for added visibility in the dark.

Some power strips may have a similar switch, but no circuit breaker.

These power strips will not trip or automatically shut off in the event of an overload, but will instead simply begin to fail by overheating or melting the casing.

This is incredibly dangerous and can potentially cause a fire.

Other power strips may have a circuit breaker in the form of a fuse, which will need to be replaced once it has been damaged.

The most fail-safe method to know for certain whether your particular brand of power strip has an inbuilt circuit breaker is to either read through the instruction manual and outer packaging or contact the manufacturer directly.

Do All Power Strips Have Circuit Breakers?

Unfortunately, the truth is that even though most power strips do have circuit breakers, not all do.

This is why it is imperative that you check whether or not your power strip does indeed have a circuit breaker.

If you’re in the market for a new power strip make sure you buy one that offers the protection that you need.

Read this blog here about do power strips have surge protectors?

What Is the Difference Between a Circuit Breaker and a Surge Protector?

So you’ve got to grips with what exactly circuit breakers do in order to prevent electrical damage, but you may be wondering what a surge protector is and what the difference is between the two.

First of all, it’s easy to confuse them, and that’s because they both help to ensure that the electrical system that you are using has a form of specific protection.

However, there are important differences to keep in mind as they are designed to protect in some different ways.

Let’s put these two guardians of electronic protection up against each other to really compare what each of them brings to the table:

The bottom line here is that a circuit breaker should prevent the circuitry/wiring from overheating and potentially causing a fire.

However, a surge protector can prevent a specific appliance from being fried by a sudden voltage spike, such as a lightning strike or a power surge.

What Happens if You Don’t Have a Circuit Breaker in Your Power Strip?

So as we’ve seen, circuit breakers provide protection, but what if your power strip doesn’t have one?

The circuit breaker helps ensure that if you accidentally overload your power strip then that overload will be detected and the power running to it will be disconnected.

However, without that piece of technology playing its part, you could overload your power strip without realizing.

4 Signs That Your Power Strip Is Overloaded

If your power strip does not have a circuit breaker then be vigilant for the following:

Read this blog here about do power strips protect against lightning?