The term “universal” is used to describe a cable that can be used in different countries. For example, an AC cord that works in the United States and Canada would be considered a universal AC cord. But what if you need an AC power cord for another country? Are they universal, too?

Typically they are not universal, not unless they’re specifically made for that country.

The long answer is more complicated and requires more information about how electricity flows through devices and how different countries use different voltages for their power systems.

In this article I will explain if AC power cords are universal and if this really matters as well as where to buy AC power cords.

AC power cords are universal in the sense that they all work with any standard 120VAC 60Hz outlet in the world. That’s because they have a three prong plug on the end that fits into your wall and has two flat blades for the live and neutral wires and a round grounding pin. 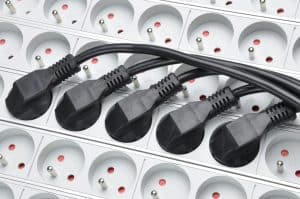 AC power cords are not interchangeable. Each type of cord has a specific configuration, and if you connect the wrong cord to the wrong device, you can cause damage to the cord or the device.

The standard AC power cord has two prongs on one end and three prongs on the other end.

The third slot on an outlet is for grounding purposes; it connects to the ground wire in your home’s electrical system. If you plug an appliance with a three-pronged cord into an outlet without grounding, the appliance will function correctly but without proper grounding protection from surges or spikes in voltage caused by lightning strikes or faulty wiring in your house.

The reason for this is that a power cord is designed to transfer electricity from an outlet to a device.

This can only happen if both ends of the cord are compatible with each other and with the device itself.

For example, if you have a laptop computer with a standard AC power cord, you can’t plug it into an outlet meant for a desktop computer because it won’t fit properly.

And even if you could find an adapter that would let you do so, there still may be problems because more wattage than your laptop can handle would be flowing through it at once — which could damage both the adapter and your computer’s circuitry.

Can You Get Universal AC Power Cords?

Universal AC power cords are available and they’re also known as “universal adapters.” These types of cords have multiple tips, so you can use them with a variety of electronic devices. These cords are very convenient because they allow you to use one cord in place of several different ones.

If you want to get the best deal possible, make sure that you compare prices from multiple vendors before making a purchase. Shopping online is usually cheaper than buying in a brick-and-mortar store because there are no sales tax costs involved.

You may have seen the term “universal” on some power cords. If you’ve ever wondered what it means, here’s the answer: it refers to a type of cord that can be used with multiple devices.

These types of power cords can be found at many electronics stores and online retailers, but they are not always readily available. They also tend to be more expensive than standard cords because they can only be used with certain devices and not others.

Read our blog here about are cheap extension cords safe?

What Happens If You Use a DC Power Cord Instead of an AC?

If you’re in a hurry and only have a DC cord, there’s a good chance that your computer will work just fine. However, there are some things that can go wrong.

The most obvious problem is that your computer won’t charge while it’s running on DC power. This can cause problems with battery life in laptops and other portable devices.

Another problem is that you may damage your device if it was designed to run on AC power. For example, if you plug an iPhone into a DC power source, the phone will vibrate for about 10 seconds before shutting down (this was actually an intentional feature used by Apple).

If your device does not shut off when it’s plugged into DC power, then this could indicate that something else is wrong with the device (it could be broken) or with the power source (it might not be able to provide enough voltage).

How Do You Know Which AC Power Cord to Use?

The first thing to look at is the wattage of the power supply. Most power supplies will have this listed on the back or bottom of the unit.

The next thing you want to look at is what kind of connector your computer has. Many laptops have a proprietary connector that is not interchangeable with any other brand or model computer.

You can find out what type of connector your computer has by looking at the back of it and seeing if there is a picture of the connector on it. If there isn’t, check your owner’s manual for more information on this.

After finding out what kind of connector you need, you need to search around for a replacement cord that will fit into it properly and deliver enough power for your needs.

If possible, try to use a cord made by the same manufacturer as your computer so that it will be compatible with its design and specifications.

If not, then check with your computer manufacturer or search online for compatible adapters.

Does It Really Matter Which AC Power Cable You Use?

You might think that it doesn’t matter which power cable you use with your devices, but you’d be wrong.

The wrong cable can fry your electronics and ruin your equipment. At best, it’ll make your device lose power when it needs to be charged the most, and at worst, it could even cause fires or shock.

For example, if you’re using a 12V adapter to charge a device that requires 19V of power, then you could damage the battery.

This is because most laptops need around 19V of power to charge properly, while smaller devices require only 12V of power. If you were to use a 12V adapter on your laptop while it was plugged in, then there’s a chance that this could damage not only the battery but also other components inside the laptop as well.

However, there are some other things you should consider when choosing an AC power cord:

Where Can You Buy AC Power Cords?

If you need a new AC power cord for your computer or laptop, here are places to look:

Read our blog here about is switching off at the wall the same as unplugging?

Make sure you have enough space on your outlet. You need room to plug in multiple devices without them overlapping or being too close together.