If you’re looking for a way to save energy and cut costs, you might want to consider switching off at the wall.

This is often referred to as “unplugging” but it’s not quite the same thing even though the effect are similar.

Let’s take a look at what unplugging your devices from the wall can actually do for you.

Is Switching Off at the Wall the Same as Unplugging?

Unplugging is actually just switching off at the wall. You are turning off your device by removing it from its power source. It means that it won’t be drawing any power until someone plugs it back in again or switches it back on at the wall. 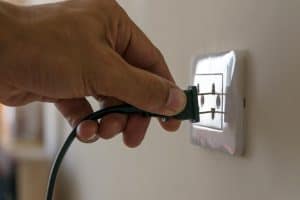 Should You Pull the Plug Out of the Power Outlet or Just Switch Off?

The answer to this question depends on the type of outlet you are using.

Some outlets have a switch that is designed to be turned off and on, while others have a simple plug that can be pulled out of the socket. If you are using an outlet with a switch, turn it off before pulling out the plug.

If you do not have an outlet with a switch, then just pull out the plug and leave it disconnected until you need to use it again.

Someone can use safely as long both types of outlets as they are properly connected to their respective circuits by way of an extension cord or power strip.

What Happens When You Leave Your Device Plugged In?

When you have a device plugged into its charger, electricity continues to flow into it whether or not the device is on.

This means that your device is draining energy from the grid even when it isn’t being used.

Even if your smartphone isn’t actively running any apps, it may still be using battery power just by having its display on and checking for messages every few seconds.

Can Leaving Electronics Plugged In Hurt Them?

Leaving electronics plugged in can damage their batteries and shorten their life spans.

Batteries work best at room temperature and their capacity decreases as they get warmer — so when they get too hot they can become unstable and even stop working.

Does It Matter If You Unplug or Switch Off at the Wall Outlet?

There are two types of devices and both have different rules for turning them off at the wall outlet:

However, some manufacturers recommend disconnecting certain equipment from its power source even if it does not contain a transformer.

This precautionary measure is taken because it may prevent more serious problems down the road due to electrical surges or brownouts caused by faulty wiring in homes or office buildings.

Should You Unplug Everything When You Leave the House?

If you are like most people, you probably don’t think about how long you leave your devices plugged in when they are not in use.

However, those devices continue to draw power even after they are turned off because of what’s known as phantom load.

Phantom load refers to the energy used by devices even when they’re not actively being used.

For example, if you have an electric water heater and turn off the circuit breaker that powers it, but leave the appliance plugged into an outlet, it will still consume energy.

The short answer is yes, it matters a lot.

The longer answer is that there are two main issues at play: safety and energy efficiency.

Can Electronics Use Power When Plugged into a Switched Off Outlet?

No, electronics cannot use power when plugged into a switched-off outlet. First, let’s clear up some common misconceptions about electricity and electronics.

In most cases, the electricity that powers your computer or TV can only draw power when the outles is set to “on”.

Other things to remember:

If you’re concerned about your electronics using power when they’re plugged in, there are two things you need to worry about.

First, there’s the standby power usage of the device itself. For example, if you have a TV or stereo system that is designed to be left on 24 hours a day, it will use more electricity than one that is only turned on when you’re watching or listening to it.

The other thing to consider is phantom power — which is the energy used by devices even when they are turned off or unplugged from the wall (or battery).

This includes everything from radios and alarm clocks to smartphones and tablets — but not laptops because they use batteries that can’t be drained completely.

If you want to know how much electricity a device uses while it’s plugged in but not in use, check out our blog about is it better to turn off or unplug?

In theory, unplugging all of your devices would save a lot of energy because they wouldn’t be consuming any power when they were switched off at the wall.

The problem with this is that most appliances have standby modes built into them which means they still consume electricity even when they are turned off.

Read this blog about should you turn things off before unplugging?