If you are anything like me, you get anxious when it comes to how to safely unplug your appliances. Especially if you are planning on leaving the house for an extended period of time. One thing that always confused me when it comes to my devices is whether or not I should turn things off before unplugging them – and I’m not alone.

So, do you actually have to turn things like applicants off before pulling the plug? While the plugs to most devices and appliances are perfectly safe to unplug while they are still on, you should always turn them off before.

Here is a deep dive into why you should turn off things before unplugging them so that you can get yourself, and your home, safe.

Here’s If You Should Tunn Things Off Before Unlpugging:

It’s better to turn devices off properly before plugging. When you unplug something, it creates an energy spike in your home’s electrical system. That energy spike can cause problems for your appliances, which might not handle that surge properly and could get damaged. 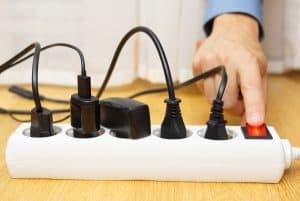 What Is The Difference Between Turning Off and Unplugging?

The main difference between unplugging a device and turning it off is how you cut the power. By turning a device off, you are shutting that device down so that it will no longer work until it is turned on again. When you unplug a device, you are removing the plug from a wall outlet which means you have completely removed the device from any power source.

This ultimately means that by unplugging something, you are completely removing it from power so it will not turn on. This is most noticeable if the device or appliance that have some sort of light on them.

For example, if you turn off your coffee maker with a switch, there may still be a light letting you know that the device is still connected to power.

Removing the appliances completely from the power by pulling the plug will mean that there will be no light on signaling that there is no power currently flowing through. So, if your goal is to render the appliance completely unusable without power, your best bet would be to unplug it completely.

Read this blog here about should extension cords be unplugged when not in use?

Can You Damage Electronics If Not Turned Off Before Unplugging?

Electronics are expensive in more ways than one. Not only do they cost a lot to buy, but running them will run you a pretty penny on your electricity bill.

This is why it is so important to make sure to care for them properly, especially when it comes to how you connect and disconnect them from a power source.

When it comes to causing damage to your electrics by not turning them off before unplugging them, rest easy in knowing that you really can’t hurt your electronics that way. Most electronics, especially ones made in this century, have a built-in surge protector that is meant to protect the device when the power is quickly removed.

However, this doesn’t mean that some harm can’t come from unplugging an electronic device before turning it off. Turning off an electronic is your first line of defense when it comes to getting shocked.

Remember, there will always be some sort of power flowing as long as the electronic is plugged in. So, if you go to quickly unplug it and there is still power there, you could give yourself a shock.

Luckily, most plugs are made with special rubber that reduces the risk of a shock, but it can still happen more than you think.

So, if you don’t want to risk getting zapped every time you want to unplug your TV, make sure to completely turn it off first and wait a couple of minutes before reaching for the plug.

Which Electronics Should You Turn Off Before Unplugging?

At the top of the list of things, you should consider turning off completely before unplugging it is a computer. Whether you own a desktop or a personal laptop computer, turning it off before unplugging can save your device in the long run. This is especially true for those who like to leave their laptops on and charge all night long.

To reduce the risk of burning out your computer, let it charge overnight and then put it in shut-off mode before disconnecting the charger.

This will help to protect the internal battery on your computer and will also allow your charger to last for a longer time.

Another electronic that I always make sure to turn off completely before unplugging is any personal device that is meant to be used as a heating tool.

Electronics like heating pads and heating blankets are perfectly safe to use, even when you’re sleeping. However, because they do get hot, in order to protect yourself, always turn it off and wait for it to cool before unplugging it from an outlet.

The last thing that is suggested that you turn off before unplugging it is power strips. Power strips are a great addition to any home since they allow you to plug in more than one device at a time which is a major time saver. However, when they are not in use, they still have a good amount of electrical currents running through them at all times.

This is because the power is meant to be spread out between devices. If you go to unplug a power strip while it is still active, you could electrocute yourself which could in turn burn out any device that you currently have plugged into the power strip.

To avoid this, start by turning off the power strip completely. Most strips have a simple on/off switch that will light up when there is power running.

Should You Turn Off a Monitor Before Unplugging It?

When it comes to using a computer monitor, it is recommended that you always turn it off completely prior to unplugging it. This is especially true for newer and more tech-heavy monitors like ones that feature an LED backlight.

Smart devices have completely changed the way we live, but they are very fickle creatures. The smallest thing can completely alter how they function which can really mess up your routine. Computer monitors are among these fickle devices and can often malfunction with just the slightest inconvenience.

However, an important thing to keep in mind is that devices like computers and monitors are designed to be able to handle a sudden loss of power. This was put in place in the case of a power outage so that the internal workings of your device won’t burn out.

This same technology will protect your devices from the same sudden power loss that comes from unplugging them without first turning them off.

But, this fail-safe should be used sparingly so that it doesn’t lessen its effectiveness over time. This is why it is important to protect your devices like monitors by always shutting them down before unplugging them.

Is Switching Off Power At The Wall The Same As Unplugging It?

Whether or not hitting a switch on your wall and unplugging something is the same depends on the type of switch you are using. Traditional wall switches connect to one power source. Whether it is a built-in light or a specific outlet in the room, that switch will only control the power to that specific thing.

If your switch is directly connected to a single outlet, switching it off is not the same as unplugging it. You are simply disconnecting it temporarily from the power source, much like you would be done by just turning the device itself off.

However, as mentioned before, most devices will feature some sort of light indicating that there is still power flowing. Switching off an outlet from the wall means that there will not be a light on the device, but that doesn’t mean there is no power present.

Since things will still be plugged in, there is always a chance there is some power running to it.

To give yourself peace of mind that there is absolutely no power feeding into that device, it is suggested that you not only turn off the device at the source but also the wall switch. After I completed both those steps, you then can safely unplug your devices from the outlet.

Check out this blog about is it better to unplug or turn off?

Knowing how to properly care for your electronics and devices is your first defense to protecting them from overheating or burning out. You may be surprised to learn that turning something off doesn’t always mean that is completely off, especially if there is power still moving through it.

So, in order to be completely sure that you can safely move, touch, or even fix a device without risking a shock, always turn it off before unplugging it. Not only will you save yourself from getting a zap, but you can also be extending the shelf life of your devices and electronics. Good Luck.