If you’re like most people, you probably have a lot of appliances and devices plugged into a power strip. If you’re not sure whether or not using a power strip actually increases your electricity bill.

Short power strips do not increase your electrical bill noteworthy but long ones will draw power and lower your amount of amps. Longer power strips and extension cords will add resistance and therefore not deliver as many amps to electronic devices. 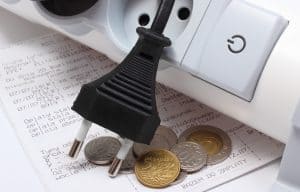 A common myth about power strips is that they use more electricity than individual appliances plugged directly into an outlet.

This is generally not true because when an appliance is plugged into a power strip and turned on, only one plug on that strip will be in use at any given time; therefore, only one socket will be using energy from the wall outlet at any given time.

But if you have a power strip with 25 feet of wire, they will draw more power.

How Much Electricity Do Power Strips Use?

A power strip or extension cord of 16 gauge and 25-foot can deliver 30 amps whereas a 16 gauge and 100-foot cord will only deliver 10 amps. Therefore you need to read and respect the numbers indicated on the equipment.

Let’s use an example.

You need to use a power tool in your garden. Here are some numbers for commonly used tools:

Now, if you have a 25 feet long power strip or extension cord with 16 gauge, you’re good. But you shouldn’t connect your snow blower into a 100-feet long version.

In that case, the gear will heat up and wear faster and you could also risk the whole system catching fire eventually.

A short power strip uses about $0.10 of electricity per month or $1 per year, according to the U.S. Energy Information Administration (EIA). That’s less than 1 percent of your monthly electric bill.

Power strips come in two varieties — those with surge protection and those without it.

Surge protectors protect against sudden surges in power from thunderstorms or other electrical disturbances, while non-surge-protected strips just give you more outlets.

In general, power strips don’t use much more electricity than the devices plugged into them. But there are some exceptions:

Do Surge Protectors Use Less Electricity than Power Strips?

Surge protectors are a more efficient way to protect your electronics from power spikes and surges. They’re built specifically for this purpose.

They contain a circuit board that switches off the power to your devices when it detects a spike in voltage. It will direct the power into the ground when grounded properly.

Read our blog here about can power strips be plugged in extension cords?

What’s the Difference Between Power Strips and Surge Protectors?

Tip: Check the protected light on the surge protector because it will stop working at some point. At that point it will turn into a power strip (losing its ability to absorb power spikes).

In fact, power strips offer no protection against surges whatsoever. They’re simply extension cords with multiple outlets on them.

The main difference between a power strip and a surge protector is found in their internal circuitry. A surge protector has components that detect when a voltage spike has occurred and then divert the excess voltage away from your electronics. This keeps them safe from damage caused by spikes in voltage levels coming into your home or office building through the wiring system.

Surge protectors use only one outlet per device, but they protect each individual device by using special circuitry to divert excess voltage away from them before it reaches them — meaning that even if one device does draw too much current, it won’t affect any other devices plugged into the same surge protector.

Can Unplugging Your Power Strip Save Energy?

The answer is yes, but it’s not as simple as it sounds.

First, let’s clarify what we mean by “unplugging your power strip.” Most of us think of our power strips as a way to save space by combining multiple electronics into one location. But they also serve as a convenient way to turn everything off with one switch.

The question then becomes, can leaving this switch on waste electricity? The answer is yes.

In fact, leaving any device plugged in when it’s not being used can be quite wasteful — even if it’s turned off. This is because modern electronics use a little power when they’re turned off; some devices may only draw 1 or 2 watts of electricity when turned off.

That might not sound like much, but if you have 10 or 20 devices plugged into an outlet, those extra watts add up quickly and can cost you money over time.

This use of power when equipment isn’t turned on is called “phantom load” or “standby power”.

Power strips don’t use any more electricity than regular outlets because they aren’t actually connected to your electrical system — they’re simply a way to make it easier for you to plug in multiple devices without having to use up all of your outlets.

If you have just one device plugged into a strip, then there will be virtually no difference in energy usage between using an outlet or using a power strip with one plug-in point. Unless you’re using a VERY long power strip (+25 feet).