Power strips are very useful for keeping your wires organized and clean.

But do power strips get hot? Does it matter if they get hot?

In this article, we’ll explore the answers to these questions, along with other things you need to know about power strips.

Here’s If Power Strips Get Hot:

Power strips get warm only when there’s a high load on them. Using a heavy-duty appliance like an air conditioner or an ironing board may cause the power strip to become hot. You need to unplug your devices if the power strip or wires get hot and check what causes the power overload. 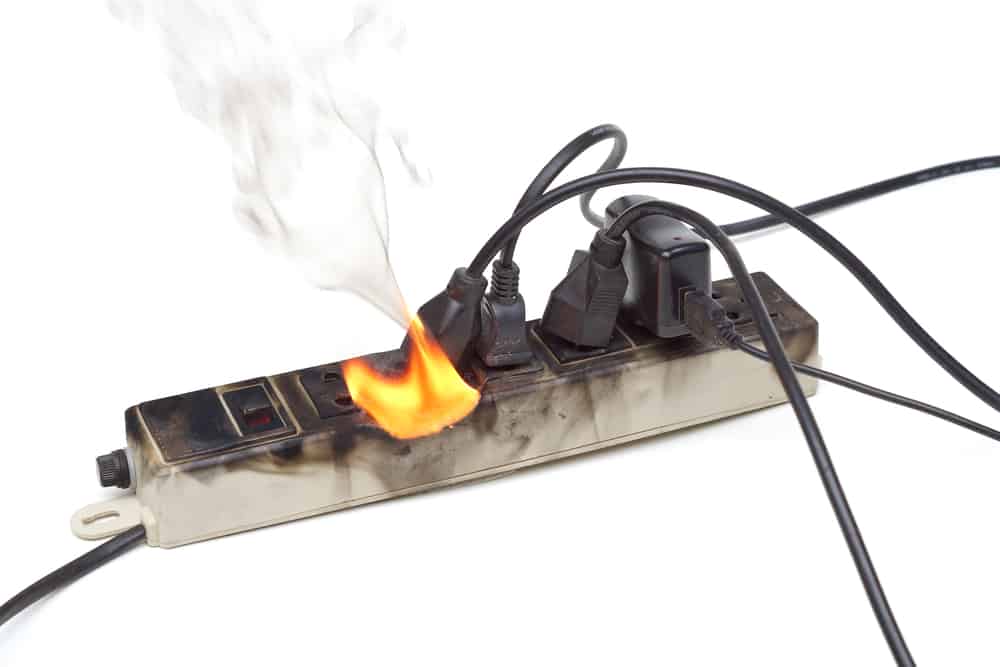 If you experience a power strip getting hot you should start unplugging the devices one by one. Find out what causes the overload and make sure to move some appliances or devices to another power socket.

You should also be aware of any major spikes on your system as they can cause power strips to overheat or break. The best way to avoid these problems is to use a surge protector instead of a power strip.

Check the protected light on the surge protector because it will stop working at some point. At that point, it will turn into a power strip (losing its ability to absorb power spikes).

The best option is to have a surge breaker installed on your main electrical panel. That will protect the WHOLW house rather than the few items you plug into a surge protector. This will render all surge protectors obsolete as you now have protected the whole house.

Can Power Strips Be Covered?

Power strips can not be covered by cloth, clothes, or carpets. Power strips need ventilation and they need to be able to get rid of heat, when necessary.

Also, most power strips will have a warning on them saying not to cover them with anything.

Can Power Strips Get Too Hot?

You need to make sure it doesn’t get hot to the point where it feels hot on your hands when grabbing it.

The main reason power strips get warm is that they’re often connected to several devices that are drawing power. A typical computer system draws 25 to 100 watts of power at any given time, and there may be other electronic devices plugged into the same strip. That’s why it’s important to check the maximum load rating on your power strip before plugging everything in.

If you’ve exceeded the recommended load capacity for your strip, then it will get warm as it struggles to provide enough current for all those devices.

Another way around this issue is to make sure each device has its own dedicated outlet or circuit from the wall socket where possible. For example, if you have heating devices plugged into one power strip, consider splitting them up so that each device gets its own outlet (or at least circuit) instead of sharing an outlet with another device.

Power strips vary in size, number of outlets, and wattage rating. Those differences translate into differences in how much power they can handle before overheating.

You’ll know if your strip is overheating because it will get warm to the touch or even hot enough to hurt if you touch it with bare skin.

If that happens, unplug your device from the power strip immediately and check to see if something’s wrong with it — especially if it’s been sitting there for more than an hour or two.

If everything seems fine with your device, turn off the power strip and let it cool down before plugging anything else into it. That may mean waiting until later in the day when things have cooled down.

If you have an older power strip, it may be time to replace it with a newer model that has better insulation and more safety features such as automatic shutoff when overloaded.

The same goes for surge protectors — if they’re old, worn out or damaged, get rid of them and get new ones that offer more protection against voltage spikes than older models did.

Overheating happens when there is too much power running through a circuit. This can be caused by anything from too many devices plugged into one outlet or faulty wiring in your home.

However, there are several other factors that can contribute to an overheating power strip:

The wiring of your home may not be able to handle the amount of electricity being used at once.

This can cause damage to your appliances and even start fires if left unchecked.

Too Many Devices Plugged In:

If you’re using multiple devices at once, this will put extra pressure on your circuit and cause it to overheat more quickly than normal.

A good rule of thumb is to keep the total number of devices plugged into any given outlet below three (including computers).

If you’re adding any heating or cooling devices (toasters, ACs, hairdryers, etc.) you need to unplug all other devices from the power strip or surge protector. If you need more outlets consider using another power socket to even out the load across more circuits.

Read our blog here about do power strips expire and go bad?

Surge protectors can also help reduce the risk of fires in your home by limiting the amount of voltage flowing through them.

However, like most electrical devices, power strips can still pose a fire hazard if they are not used correctly or have been damaged by water or other elements.

If you want to find out how much electricity your devices draw, check the back of your device or its manual for details. If you’re not sure how much power something draws — say, a hair dryer — Google it.

Manufacturers often list the wattage on their websites so that consumers know what they’re getting into before they buy something.

Should You Replace a Hot Power Strip?

Power strips are designed to dissipate heat from inside the box by using ventilation holes in the sides or bottom of the case. However, they should never get hot to the point that you cannot hold them in your hand.

Consider replacing it with one that has an overload protection feature.

If your device draws more current than what’s specified on its label, the overload protection feature will shut down your device so it doesn’t get damaged by excessive voltage or current.

The best way to avoid an overloaded circuit is to make sure all your devices are plugged into outlets rated for their maximum load — and then don’t exceed that load.

How Often Should I Replace a Power Strip?

It’s best to replace power strips every 10 years to be on the safe side. If you don’t know how old your power strips or extension cords are it’s a good idea to examine them for cuts and dents.

A faulty power strip could also cause damage to your devices if it overheats or shorts out and sparks during use. When this happens, it’s usually a fire hazard first and foremost because of all the smoke and flames involved.

Check this blog out about do extension cords reduce power?