Power strips can be useful for managing your home’s electrical use, but some people have concerns about whether they use electricity when they’re turned off. Here’s what we found out.

Power strips are a useful tool for managing the flow of electricity in an area where you need to plug in multiple devices.

They allow you to connect multiple items to one outlet, and they also have surge protection built in to protect your electronics from damage caused by sudden voltage fluctuations or surges. But do they draw electricity when turned off?

In this article I will explain if they consume power when turned of as ell as aspects and elements involved in this.

Here’s If Power Strips Use Electricity When Turned Off:

Most power strips don’t use electricity when they’re turned off, but there are a few exceptions. Some models do draw power even when they’re not in use. Some older models have standby modes that continue to draw a small amount of power. And smart strips draw power on standby too. 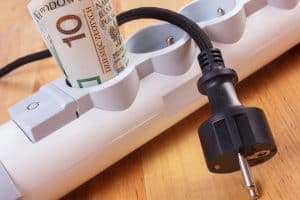 Should You Turn Off Your Power Strip?

A power strip is a great way to save money and energy by turning off your electronics when you’re not using them. But does it actually make a difference whether the strip is turned off or left on?

The short answer is no, you don’t need to turn off your power strip. The longer answer is that it’s not worth worrying about.

However, there’s some debate over whether or not you should always turn off your power strip.

If you’re curious about the answer to this question, here are some things to consider:

Turn Off Your Power Strip When Not in Use

The main reason critics say that you shouldn’t leave power strips turned on all the time is because they consume small amounts of electricity even when nothing is plugged into them.

This is called phantom energy and it can add up to hundreds of dollars per year if all the devices in your home are plugged into power strips.

Even if you only have a few electronics plugged into your strip, leaving it on all day long can still cost you money.

Turn Off Your Power Strip When Not in Use (Part 2)

For those who want to save as much money as possible on electricity bills, turning off power strips when the devices aren’t in use is probably the best option.

But if you don’t mind spending extra cash on phantom energy costs, then leaving them on won’t affect anything other than your wallet.

Does Turning Off a Power Strip Save Energy?

Power strips can be useful for many things, but saving energy isn’t one of them.

Power strips are often used in conjunction with devices that are always on and need to be plugged into multiple outlets, like lamps or printers.

In this case, it can be helpful to turn off the power strip rather than unplugging each device individually.

But even if you turn off the power strip instead of unplugging each device, it won’t save any energy unless you do it properly.

For example: If you have three devices plugged into one 20-watt power strip, turning off that power strip would save 20 watts of electricity — not much considering all three devices are still using power anyway.

But if you have one device plugged into each of three different 20-watt strips and turn them all off at once, you could potentially save 60 watts of electricity — enough to charge your phone battery twice over.

Turning off a power strip saves energy in two ways:

Does Turning Off a Power Strip Save Electricity?

If you want to know why turning off a power strip doesn’t save electricity, it’s because those strips don’t consume any power unless they have something plugged into them.

When they do have something plugged into them, they’re just passing along the current from one outlet to another.

Power strips aren’t designed to save electricity — they’re designed to make it easier for you to manage your electronics and appliances. You should always unplug your devices when not in use, but if you forget or can’t find an available outlet, using a power strip is a quick alternative.

Using a power strip won’t reduce your energy bill because it doesn’t affect how much electricity your devices use while they’re turned on.

Is Unplugging the Same As Turning off Your Power Strip?

While it is true that unplugging your devices is the same as turning off your power strip, there are some huge differences.

The first difference is that unplugging a device causes it to lose power immediately, while turning off the power strip may not actually do anything.

Some people find it easier to just unplug their devices instead of turning them off because they don’t want to wait for the computer or appliance to reboot before they start using it again.

The second difference is that unplugging something doesn’t necessarily save energy. While this may seem counterintuitive, many devices still consume some amount of energy when they are plugged in but not being used.

For example, if you have an old desktop computer plugged into a power strip and turned off but still connected to an outlet, it is still consuming energy even though it isn’t doing anything for you.

The same goes for TVs and appliances like microwaves or refrigerators — even if you aren’t using them, they’re still consuming power from the outlet at all times unless you unplug them completely (or turn off their respective power strips).

Which Power Strips are the Most Energy-Efficient?

Most power strips have a built-in circuit breaker, which protects sensitive electronics from surges and spikes. But there’s no guarantee that your strip is efficient enough to save you money on your electricity bill.

The best way to find out is to look for a label that shows how much energy the strip uses. If it doesn’t have one, it’s time to do some research.

Here are some tips for finding out how much energy your strip uses:

What is the Energy Star Label?

The Energy Star label is an environmental standard that’s been around since 1992 and has been used on residential and commercial appliances since 1993.

It’s used by the Environmental Protection Agency (EPA) and U.S Department of Energy to help consumers identify energy-efficient products without having to do extensive research on their own.

Energy Star Appliance Labels – These labels help consumers identify efficient appliances like refrigerators and dishwashers by looking at their energy consumption while they’re in use.

They also show how much energy each appliance will use over its lifetime if left running at full capacity 24 hours a day, 365 days a year.

So does a power strip use electricity when it’s turned off? It depends on the situation.

If you’re using a smart strip, then there will be at least some electricity used—but likely it will be minimal.

However, if you’re using an old-fashioned, standard power strip and not using a smart strip, then no electricity will be used when it’s turned off.

Read this blog here about do power strips expire and go bad?