If you’ve come to this article looking to find out what a power strip is and how it is used, then you’re in the right place. The power strip is a commonly used piece of technology in many homes and offices, so it’s important to understand what they are.

Here’s What Power Strips Do: 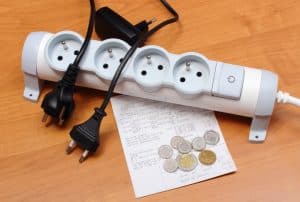 What Exactly Do Power Strips Do?

As the world becomes increasingly dependent on electronic devices, from smartphones to computer systems, our need to plug all of these devices along with their potential accessories into available power outlets is also increasing exponentially.

This is where power strips are invaluable; they are becoming increasingly present as an integral tool in both the workplace environment and in our family homes.

First released for sale in the 1970s, power strips are pieces of equipment that have multiple electrical sockets in a row, all connected to a single length of compliant cord, which then connects to a wall socket.

The electrical current therefore is extended from the wall socket, through the cable and into the additional sockets provided by the power strip.

If an individual is faced with either not enough power sockets in relation to the amount of electrical devices they need to power, or a lack of proximity to the nearest wall socket, power strips provide the ability to easily power these devices.

They can have roughly anywhere from 2 to 24 additional electrical sockets in comparison to a standard wall outlet, and also have varied cable lengths, thus dramatically improving our ability in this modern world to enjoy our electronic devices hassle free.

However, power strips do unfortunately come with certain limitations.

The potential risks and hazards associated with improper use of power strips will be covered in more depth later on in this article.

Older, traditional models of power strips wouldn’t necessarily tend to improve energy efficiency, but newer, smarter versions have the ability to both decrease energy wasted, and use energy more efficiently.

This is a win-win situation when it comes to both the environment and your bank balance.

Installing smart power strips into the home or workplace has become a proven way to dramatically save money whilst improving energy efficiency.

Why? To put it simply, it’s because of something called ‘vampire loads’.

‘Vampire loads’, also commonly known as ‘phantom loads’, refer to the energy consumed by electrical devices even when they are switched off.

As comical as it may seem to refer to something as a mythological creature, it is in fact a serious issue that secretly faces most households.

Here are examples of common household devices that produce a vampire load:

Standby mode or ‘sleep mode’ is a state in which the device reduces its energy consumption to a very minimal amount, whilst still powered on.

This reduces the amount of time it takes to power up a device, but also wastes a lot of energy.

The Environmental Protection Agency states that anywhere up to 10% of your household electricity bills can be down to these vampire loads.

Smart power strips have the ability to detect when a device is in standby mode, and can then cut off the power, making them very energy efficient.

However, as great as this all sounds, power strips should only be used as temporary solutions.

They are not designed for permanent use, which is after 90 days, according to the US Office of Compliance; the reasons as to why are covered below.

Check out this blog about do power strips expire and go bad?

Are Power Strips Safe To Use?

Power strips should be perfectly safe when used in the proper way; however, it is worth noting they are not designed as permanent solutions.

Here are some important tips on the proper and safe usage of power strips:

If you use your power strip in the correct manner you will have no cause for concern and will be able to fully reap the benefits of its function.

What Electronics Should You Plug Into Power Strips?

Power strips are incredibly convenient, especially as many homes can have a lack of wall sockets in relation to how many electronic devices we use day to day.

However, they cannot be safely used as a solution 100% of the time.

Certain electronics should never be plugged into power strips; those of which will be covered below.

Whether or not you should plug a particular electronic device into a power strip is also dependent on the rating the strip has.

Most power strips have an amp rating of 15A or more, meaning you can connect multiple devices as long as the power needed doesn’t exceed said amount.

Power strips are mostly designed for gadgets and other less heavy-duty appliances.

Here are some examples of devices that should be perfectly safe to connect to your power strip:

What Electronics Should You NOT Plug into Power Strips?

As previously mentioned, certain heavy-duty appliances should never be plugged into power strips, regardless of their amp rating. Such appliances include:

If these devices are plugged into power strips it increases the risk of overloading dramatically. Overloading will result in overheating thus increasing the potential risks of fire.

Read our blog here about why do power strips have reset buttons?