We rely on power strips in our homes to grant us the ability to connect multiple devices to our power outlets. They’re commonplace in most homes and we use them without much thought.

However, it may have occurred to you whether you should use your power strip outdoors, and in this article, we’ll explore if that’s a good idea.

Here’s If Power Strips Can Be Used Outdoors:

Power strips are designed to be used indoors. They are not waterproof and can be damaged by moisture. Also, they may not be able to handle extreme temperatures that are common in outdoor environments. If you want to use power strips outdoors, select one that has been designed for outdoor. 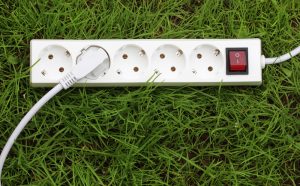 Can Power Strips Be Used Outdoors?

Most power strips are intended for internal use only unless specifically stated by the manufacturer.

Using power strips outdoors exposes them to dangerous risks such as moisture which can have damaging consequences for your connected devices.

There are waterproof power strips available for purchase, but these are not intended to be used on a permanent basis.

When Would You Use A Power Strip Outdoors?

There are many scenarios in which power strips have found themselves outside of the house and ended up in the garden.

With external power outlets usually only offering two plug sockets at the very most it’s understandable that homeowners want to find a way to power more devices outside.

Using a power strip can make sense, but it may be more dangerous than you think.

Read our blog here about can power strips be plugged into extension cords?

Is It Dangerous To Use A Power Strip Outdoors?

To know whether or not it is dangerous to use a power strip outside it is important to understand that not all power strips are the same.

Most power strips are intended for indoor use because they are not resistant to environmental factors that will be found outdoors.

The 3 main issues that can affect a power strip whilst outside are:

All of these factors can cause the power strip to fail, perhaps damaging the power strip or connected devices, and in some cases resulting in an electrical fire due to sparking.

Rain and snow are obviously big causes for concern as they create moisture and that moisture conducts electricity.

Moreover, it can be tempting to ‘daisy chain’ power strips when using them outside in order to get your electronic device to where you want it.

‘Daisy chaining’ is never a good idea as you can quickly end up overloading your power strip which again is dangerous and can have the potential to either damage your devices or even cause a fire.

So Is There A Power Strip That Can Be Used Outdoors?

Thankfully there are power strips that are designed specifically to be used outdoors because they feature a waterproof design.

These power strips are built to withstand the elements in order to keep you and your electronic devices safe from shorts and, by way of an in-built circuit breaker, can disconnect the power flow if an overload is detected.

It’s true that some indoor power strips will feature a power surge protector, but it is very unlikely that the power strip that you have at home is waterproof and that is the key to using it outdoors.

One of the best power strips on the market is the ESHLDTY Outdoor Power Strip.

It’s available for purchase on Amazon and features the ability to allow water to flow into its sockets without it becoming damaged.

However, the manufacturer does state that it should never become submerged in water and that it is only designed to withstand rain and splashes due to its IPX6 waterproof rating.

Despite the fact that there are waterproof power strips on the market it needs to be understood that, as BackyardScape.com notes, the concept of outdoor power strips can create confusion.

“Although your power strip might be labeled as waterproof and weather-resistant, no power strip is designed to remain outdoors and subjected to the elements for extended periods of time.”

If you purchase an outdoor power strip it is important to understand that this does not allow you to have devices plugged into it on a constant basis.

Having a waterproof power strip is fantastic, but it still won’t protect it from certain factors such as:

Remember, your external power strip should never be left outside permanently as there are dangers that will increase over time. Therefore, it is always best to safely store your power strip once you have finished using it.

Is It Better To Use Power Strips Indoors?

As we’ve seen, there are power strips that can be used outdoors for a limited period of time, but most power strips are designed to be used for indoor use only.

It stands to reason then that your power strips should remain inside your home.

By keeping your power strips indoors you are following proper safety protocols and ensuring that you, your loved ones, and your electronic devices are not at risk.

What Should You Use Outdoors Instead Of A Power Strip?

So, if your indoor power strip is not up to the task of providing power outdoors what is?

The following outdoor plugs and specialized strips will allow you to safely connect your electronic devices outside of the home.

However, despite there being some great solutions to your outdoor power needs, remember that using electronic devices outside is never completely safe due to the environmental reasons previously mentioned.

Always exercise caution and be aware of the risk factors whilst using outdoor plugs and connected devices.