When you plug your smartphone or laptop into a power strip, you may have wondered if it affects the charging time.

After all, power strips are designed to make it easier to charge multiple devices at once, but do they slow down the charging process?

Power strips are convenient for managing your electrical outlets and keeping them free from clutter. However, some people believe that power strips can negatively impact the performance of your electronic devices.

Let’s take a look at whether this is true or not.

You can use a power strip to charge your phone or other gadgets, but the charging time can be a bit longer than that of charging directly to the outlet. The extra wires involved will add a bit more resistance and draw a bit more power. 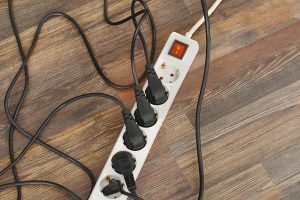 The more wires and plugs you add, the more energy is lost in transmission.

The additional energy loss, however, won’t be substantial even if you have several feet of extension cords running from your outlet to wherever you’re charging your device.

When you plug your device into a power strip, it takes longer for the device to charge as compared to when it’s plugged directly into a wall outlet.

But only a few more minutes, or so.

This happens because all of the devices connected to the strip use up some amount of electrical current from your wall outlet. This results in less current available for charging your device.

In addition, when multiple devices are connected to one strip, there will be additional voltage drops along each cable due to resistance which again causes less voltage reaching your device’s charging port.

Read our blog here about does an extension cord affect the charging time?

Does a Power Strip Lower the Power Output of Chargers?

Many people think that using a power strip will decrease the charging speed of your device.

Most modern chargers are smart enough to adapt to different power sources by themselves.

This means that most chargers will simply adjust their output based on how much juice they receive from the outlet.

So even if you have multiple devices plugged in, it does not affect the charging speed at all.

That’s a question that I hear all too often, and it’s one I’ve been asking myself for years.

The answer is that it depends on the charger. The problem with power strips is that they can cause damage to your charging devices in two ways:

Overcharging is when you leave your device plugged in and charging for too long. This causes damage to the battery and can even lead to fires in extreme cases. But most phones and laptops etc. will shut off once the battery is fully charged.

Electrical spikes are surges of voltage that are sent through the power strip, which damages your electronics by forcing them to work harder than they need to.

Luckily, there is one thing you can do to prevent this type of damage from happening:

Power strips work by cutting off electricity at its source, which means that even if your charger isn’t actively in use, it still draws some current from the wall outlet

Do Power Strips Lose Power the Longer They Are?

You will always lose some power over a longer distance with power strips. The longer the wire gets, the more power output you will lose. It’s important to always roll out a power strip completely when using a long model.

The longer the cable, the more resistance you will add.

The more resistance there is, the more power is lost.

If you want to minimize how much power is lost through your extension cord, then use a shorter extension cord. Also, remember to not daisy chain multiple power strips. If you need a really long one, buy ONE that can do the job rather than combining several shorter ones.

Do Power Strips Wear Out?

Power strips will wear over time and can become fire hazards if they’re too worn.

These devices have a fairly long lifespan, so even after being used daily for a decade, they will typically last for at least five more years of regular use.

The answer is yes, but not in the way you may think. In fact, it’s easy to get caught up in all of the marketing hype that’s out there and think that surge protectors are bad for charging time. But this isn’t true at all.

The thing to remember is that the power coming into your house isn’t what matters when it comes to charging time. The device you have plugged into the outlet is what matters most.

If a device has a slow charger, then it will take longer to charge no matter what type of outlet or surge protector you have at home.

However, if you have multiple devices plugged into one outlet, then it is possible that some of the devices will charge slower than others.

This is because some devices draw more current than others, which means that they will slow down other devices when they are plugged into the same outlet together.

If you’ve ever charged your iPhone, iPad or iPod with a really long power strip, you might have noticed that it takes longer to get the battery to 100 percent than if you charge it directly to the wall outlet.

The amount of time it takes for your device to charge will depend on a few factors that we mentioned above such as the length of the extension cord, condition of the cord and charger as well as many other factors.

Check out our blog here about do power strips use more electricity?