Power strips are a convenient way to plug multiple electronic devices into a single AC outlet.

But many people wonder if they can leave their power strip plugged in permanently.

While it is possible to do so, there are some important considerations you need to think about before deciding whether or not to keep your power strip on all the time.

In this article, we will talk about if you can plug extension cords into walls permanently.

Can Power Strips Be Plugged In Permanently?

Power strips can be plugged-in permanently. But it’s important to note that not all power stripes are designed to be left on all the time, especially if you have a lot of devices plugged in. The devices plugged in can still get damaged by surges and other issues. 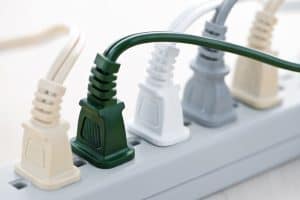 Are There Permanent Power Strips Available?

The answer to this question is no in most cases – you can plug most newer power strips into the outlet and leave them there for weeks, but not years.

However, we are not talking about just any power strip. Most of these devices come with a switch that allows you to turn off and on the strip. And if you are using an extension cord, make sure it’s rated for the number of watts going through it.

Power strips are typically designed to be used for temporary purposes only; they are not intended for permanent use.

If you keep your computer or other devices on all day long, then this might be useful as a way to save some money on electricity bills by turning off each device individually or by leaving them turned off automatically when they aren’t in use anymore.

On the other hand, if you have several devices that need constant access (for example, your home entertainment system) then a power strip may be useful for keeping all these items connected to one outlet while giving them their own switches so they can be turned off when needed.

You can purchase a power strip that has a hardwired option. The advantage of this type of power strip is that there is no need to plug it in every time you want to use it.

These are usually marketed as “plug-in” adapters or “hardwired” adapters and can be found online or at your local hardware store.

These power strips offer easy access to all of the outlets, even when the strip is not plugged into an outlet. They also eliminate the need for cords that hang down from behind furniture or appliances.

There are also some disadvantages to this type of adapter though:

Are Power Strips Consuming Power When Plugged In?

Power strips are a convenient way to plug in multiple devices into one outlet. But can power strips be permanently plugged in?

They typically can but they will waste quite a lot of energy when doing so!

Let’s look at how to setup your smart TV along with the soundbar and maybe even a subwoofer.

When you plug everything into your power strip they will be using energy – even when not turned on. This is called many things:

It all means the same: your devises are using power – even when turned off – when they’re plugged into the wall OR into your power strip.

You can fix this pretty easily by using a “smart power strip”.

Smart power strips are found here (on Amazon) at a low price and they can save you HUNDREDS of dollars per year on your energy bill!

They work in a very easy and simple way:

1) Plug in anything that should be on at all times in the “always on” sockets (such as lamps, door bells, etc.).

2) Plug the TV or Computer into “control”. Anything plugged in here will control when the others are off.

3) plugin TV-dependent gear into “Switched outlets” – they’ll power down when the TV or Computer is turned off.

Check out this blog about can power strips be plugged into extension cords?

Should Electronics Be Plugged Permanently into the Wall?

Other items may be plugged in permanently but can be unplugged when not in use.

For most electronics, it’s best to unplug them when you aren’t using them so that they don’t waste energy while they’re sitting idle on your countertop or entertainment center.

However, some items are designed to run even while they’re turned off and can’t be unplugged without significant risk of damage to the device itself or other components within the system (like your speakers or television).

How Long Do Power Strips Last?

The lifespan of a power strip depends on how much use it gets, but most last anywhere from 3 to 10 years.

Here are some things that can shorten the life of your power strip:

Power strips are devices that have multiple outlets and can be used to plug in multiple devices at once. They’re often used in offices, homes, and dorm rooms to provide additional outlets for electronic devices that need to be plugged in.

Power strips are not designed to be permanently plugged into the wall, but they can be if you want to make sure they stay in place. Before you permanently plug in your power strip, make sure it’s not an issue with the outlet or circuit breaker.

Read our blog here about do power strips use more electricity?