Power strips make a bit of noise. It’s true. They hum and buzz and sometimes even make a high-pitched whine that gets worse as you plug more stuff into them.

But is it safe? And if so, why do they make noise in the first place?

It’s safe for power strips to make a bit of noise. A high-pitched noise is typically coming from transformers with moving parts in them. They tend to create some vibration when they’re running, but mostly it’s caused by chargers plugged into the power strip. 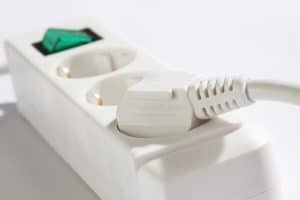 Power strips do make some noise when they are used because of the way they work.

If you’re wondering why your power strip makes noise, read on for more information about how these devices work and what causes them to make noise.

What Kind of Noises Can Power Strips Make?

It’s important to note that there are different types of noises that can come from a power strip. The first type is what you might expect — loud buzzing sounds or whirring noises.

These types of noises can be annoying and if you can hear them in the next room, it’s time to exchange the power strip and get a new one (probably of a better quality!).

One noise to note is a frequent is a super-high-pitched noise.

This will typically come from a charger or generator connected to the power strip.

If you’re using extension cords with multiple outlets, make sure they’re not overloaded either (they have maximum wattage ratings). You can also try plugging smaller items into multiple outlets at once (like lamps) instead of one big item (such as an air conditioner).

The last weird noise to watch out for is a squealing sound.

If you hear something like this coming from your power strip, there may be an electrical short somewhere in your home’s circuitry — including in your computer system or networking equipment. You’ll need to have an electrician come out and take care of this issue for you; don’t try to fix it yourself.

Power strips don’t usually make any noises when they’re plugged into an outlet and nothing else is on them — but they can make strange noises if you have lots of things plugged into them and are using them for a long period of time.

If your power strip does make an unusual noise, try unplugging everything from it and then plugging one item back in at a time to find out which piece of equipment might be causing the problem.

Smart power strips can save you lots of money

Use GOOD cords and strips that are tested. We have 1,000 of home fires every year due to low-quality wiring in cords.

Good Smart power strips are found here (on Amazon) at a low price and they can save you HUNDREDS of dollars per year on your energy bill!

They work in a very easy and simple way:

1) Plug in anything that should be on at all times in the “always on” sockets (such as lamps, fridges, door bells, etc.).

2) Plug the TV or Computer into “control”. Anything plugged in here will control when the others are off.

3) plugin TV-dependent gear into “Switched outlets” (can also called “controlled by master) – they’ll power down when the TV or Computer is turned off.

If you are hearing a humming noise coming from your power strip, it is time to replace it with a new one.

The humming sound could be caused by poor wiring, but it could also be due to damaged electrical components inside the power strip.

A damaged power strip can damage your entire computer system and even cause fires. It may also cause damage to other electrical appliances in your home.

A loud humming noise coming from your power strip is an indication that it is time for a replacement. If you want to avoid potential damage to your computer system, then buy a new one as soon as possible.

Power strips are designed to protect your electronic equipment from power surges. Unfortunately, power strips can be damaged by spikes in voltage that occur during a lightning storm. When this happens, the power strip emits a loud buzzing sound, which is usually an indication of internal damage.

If you hear an unusual noise coming from your power strip, turn off all devices connected to it before continuing your investigation into why it’s making noise.

Then unplug everything from the outlet at once instead of turning off each item individually — this will help prevent any other devices from being damaged by possibly remaining electrical current flowing through them after they’re disconnected from their power source.

There are several reasons why your loud power strip might be making noise:

Loud power strips are often the culprit for a number of problems with electronic devices. A variety of different things can cause it, from poor grounding to bad wiring. Loose connections can also cause the loudness, which is why it’s so important to test your outlets and power strips each time you have an issue with your electronics.

The problem with loud power strips is that they can cause a lot of damage to your appliances and electronics if left unchecked.

Loose connections or poor grounding usually cause the loud noise on the circuit board inside the strip itself.

If you don’t test your outlets regularly, then this could end up causing some serious damage to your expensive electronics.

If you use a loud power strip often or rely on one in order to run all of your devices at once, then it’s important that you take care of it properly. You should always test each outlet before plugging anything into them and make sure that everything is grounded properly before using it again.

Power strips are a common household item that most people use every day.

Unfortunately, power strips can catch fire and cause serious damage to your home. If you notice any of the following hazards or signs, it is important to call an electrician immediately.

If you notice any of the following signs, it is important to replace the power strip:

The most common cause of power strip fires is overheating.

When a power strip gets too hot, it can start to melt or even catch fire. This happens because the wires inside aren’t properly insulated from one another. When this happens, electricity from one wire can travel through another wire and cause an electrical short circuit.

This results in sparks flying through the air around your home electronics — which could potentially start a fire if not taken care of quickly enough.

Should You Replace a Power Strip that is Making Noise?

The answer to this question depends on the particular noise and where it’s coming from. While it may seem like a good idea to replace the strip, sometimes it’s not necessary.

If you have an older strip, for example, and it’s making a clicking noise when the light is turned on or off, then you should replace it with a new one.

This indicates that there is something wrong with the circuit breaker or wiring inside of your home, and you need to call an electrician to make sure everything is safe.

However, if your power strip is making a very high-pitched sound, it’s probably just a charger plugged into it or another transformer around it.

In this case, you might just want to try unplugging the device (or unplugging everything else) and see if that fixes the problem.

If not, then you can try plugging in one small appliance at a time until you find out what’s causing the noise so that you don’t waste money replacing something that doesn’t need replacement.

The most common cause of power strip noise is that they’re not plugged in correctly. When you plug one into an outlet, you should push it all the way in until there are no gaps between the wall plate and the back of the strip itself.

If there are gaps, especially if you have several plugs on one strip, then some of your devices will draw power from one side of the outlet while others will draw from another side — creating uneven currents which cause buzzing and other problems.

Most people aren’t going to even notice the sound produced by a few power strips running in their home office, so as long as you’re not making enough noise to be noticed from 10 feet away, it’s typically fine.

Check out our other blog about do power strips expire and go bad?