Power strips are a convenient way to plug in multiple gadgets, but they also come with some downsides. Some power strips have surge protection, which can help prevent damage from power surges and spikes.

That said, is it better to avoid the power strips altogether?

Is It Best To Avoid Power Strips?

Power strips can be used safely when you need to plug in more devices than the outlet can supply. However, long power strips that work more like extension cords should not be used permanently. Also, it’s important to not draw more power from a power strip than the indicated maximum. 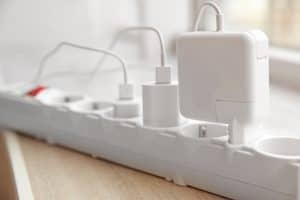 The simple answer is yes — but only if you use them safely.

Power strips can be dangerous if you don’t use them properly.

Power strips are a popular way to organize and manage multiple cords, but they can also be safety hazards.

Here are some situations where power strips should be avoided:

Overloading may cause your power strip to overheat or stop working altogether. You should never plug in more devices on a power strip than it can handle.

Doing so could cause the unit to overheat.

You can see on the unit how many amps it can supply and a good rule of thumb is to never plug in more than one device with heating or cooling features (fans, toasters, hair dryers, etc.)

Voltage spikes occur when there’s too much demand on the local electricity grid — usually because you have too many appliances plugged in at them same time.

But it can also happen for reasons outside your home. Power surges or voltage spikes are not too uncommon.

Even if your home’s wiring is fine and there isn’t any damage nearby that could cause a spike, certain kinds of appliances are still vulnerable to voltage spikes even when they’re operating normally.

The way to accommodate this is to use a surge protector.

Should You Use Surge Protectors Instead of Power Strips?

They look and function like power strips but they have an added feature to protect against power surges. They are especially helpful for older houses without a central power surge unit.

Surge protectors cost a little bit more than power strips (or extension cords) but they do offer that extra layer of protection. It’s also recommended in kids rooms and for any units you leave plugged in when you leave the house.

Power strips are ONLY designed to make it easier to connect multiple devices to one outlet. But they don’t actually protect your equipment from surges or spikes in voltage.

Surge protectors, on the other hand, do offer protection against surges and spikes by providing a buffer between your equipment and the electricity coming out of the wall outlet.

Surge protectors will absorb and divert any spikes in power higher than 120 volts. It will divert it into the ground. The TV or stereo will suffer from small spikes happening daily.

Check the protected light on the surge protector because it will stop working at some point. At that point it will turn into a power strip (losing its ability to absorb power spikes).

Power strips may be safer than extension cords just because they are not as long. The longer the wire, the more resistance it will add and the less amps you can draw from it.

That means that you shouldn’t use very long (cheap) extension cords with power tools and other equipment that require lots of amps (15-20 amps and such).

If you can, make sure to use your power tools as close to the power socket as possible and avoid long extension cords.

OR you can use an extension cord with a high “gauge” (indicated on the thing).

The longer the extension cord, the fewer amps you can draw.

Then the tool can overheat and you shorten its life! The extension cord can also overheat.

You need to consider: What’s the largest tool (largest draw) you’ll be using with the power strip or extension cord, and what’s the longest distance you need? Then you know what to look for.

Here is a blog about should unplug things off before switching them off?

Where Should You Avoid Using Power Strips?

Here are some places where you should avoid using power strips:

Bathrooms are wet areas, which means that electrical equipment is likely to get damaged if it gets wet — even accidentally.

If you need to plug something into an outlet in your bathroom (for example, a hair dryer), be sure that it has its own waterproof housing so that water doesn’t damage any of its internal components.

In basements or crawl spaces.

Basements and crawl spaces are often unheated areas of your home, so they tend to be colder than other rooms in your house during winter months when you need heating more than ever before.

They can also be moist.

This makes them poor locations for installing power strips.

Power strips located under carpets or heavy furniture can be crushed by weighted items such as desks or bookcases, causing damage to their internal components and possibly resulting in a fire hazard.

If you have no other choice but to use one under heavy furniture, make sure it’s free of any sharp edges that could puncture it.

Where Is It Safest to Use a Power Strip?

When using a power strip inside your home, keep these tips in mind.

Use surge protectors instead of power strips whenever possible. A surge protector offers more protection against electrical surges than a power strip does — but only if it has enough outlets connected through the right kind of wiring (for instance, coaxial cable or phone line).

If you’re not sure whether your surge protector has these features or not, check with its manufacturer before using it with sensitive electronics like computers and televisions.

While a power strip can be handy, if you want to minimize the risk of electrical fires and power surges, it may be better to unplug electronics when you’re not using them.

At the very least, keep your unused electronics unplugged when they’re not in use.

Read our blog here about can power strips be plugged into extension cords?