Power strips are essential for anyone who owns a computer or other electronic devices.

They allow you to easily manage multiple electronic devices that are plugged in at the same time.

The problem is that power strips don’t last forever. In fact, most of them don’t even last 10 years.

In this article, we will take a look at the lifespan of power strips and the factors that affect their aging.

Here’s How Long Power Strips Can Safely Be Used: 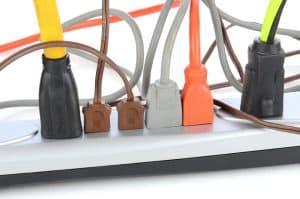 Power strips can be used for many years if they’re well-made and cared for. The average life expectancy of a power strip is four years, but this depends on how it’s used and stored.

The following factors can affect its lifespan:

As we said the lifespan of a power strip depends on several factors, including the brand and model, how often it’s used, and how well you take care of it.

For example, if you have a cheap $5 power strip that you rarely use, then chances are good that it will outlive your computer and all other electronics in your home office. But if you have a $100 power strip that gets used frequently and never cleaned or maintained properly, then it might only last about 2 years before breaking down completely.

How Do You Know When a Power Strips Has Gone Bad?

The life of a power strip is determined by the quality of the materials used in its construction, how well it was built and how often it gets used.

Here’s how long different types can safely be used:

Basic power strips are usually made from plastic and have no surge protection or circuit breaker. They are available at any local store for less than $10. You should not use them for more than three years.

Surge protectors have better build quality than basic power strips and provide protection against spikes in voltage, which can damage electronics within your home. A surge protector also has an indicator light that lets you know if there is an issue with your home’s electrical system.

These devices are designed to last up to seven years if they’re used properly — but they can also be damaged by surges in voltage, which leads to early failure.

Do Power Strips Have Expiration Dates?

The first step is checking the manufacturer date on the back of the product. This will usually be located underneath where the cord enters the device.

If there isn’t date there, try looking for an FCC stamp on the bottom of your power strip or outlet to see if there is any sign of when it was manufactured and tested for safety compliance.

If there’s no date, or it’s too worn down to read, then you should check online for reviews or ask friends who might have similar products and see what they have to say about their experiences with that specific brand or model over time.

Can You Use Really Old Power Strips?

The answer to this question depends on your age and the quality of the power strip. If you’re using an older strip, then it may have become worn from use and could be failing.

Most power strips are designed to last 10 years, but that’s under ideal conditions.

Most people don’t use their power strips very often, so they aren’t being used enough to wear them out. But in some cases, they are being used to the point where they will wear faster than others.

Power strips are also susceptible to damage from surges in voltage and electrical spikes.

The older they get, the more likely they are to fail in this way. And while these problems can occur at any time, they’re more likely when there is a storm or another natural disaster nearby that causes sudden increases in voltage levels.

What Can Cause Power Strips to Go Bad?

The most common reason for an older power strip to stop working is a loose connection between the outlet and the cord.

This can be caused by anything from a poor connection in the manufacturing process to wear and tear on the cord over time.

If you have an older power strip that still works, it’s probably okay for now, but if you’re looking for peace of mind, it’s best not to use it as your primary power source.

Instead, consider using it to connect less important devices like external hard drives or printers that don’t need constant access.

There are three other main ways that power strips can fail:

Here are some tips to help you keep your power strip safe and functional for as long as possible:

When Should You Replace Power Strips?

You should replace your power strips if they have any of the following conditions:

A power strip is an essential device for anyone who wants to save time by connecting multiple devices to one outlet. When shopping for a power strip, make sure that it comes with the right amount of outlets for your needs. You should also check the length of its cord so that you can plug it into an outlet that’s close to where you need it most.

If you plan on using a power strip regularly, consider investing in one that offers surge protection as well as other features like an indicator light or on/off switch.

Read our blog here about should you unplug extension cords when not in use?