Lightning is one of the most frequent causes of power surges and outages in residential homes.

Power strips are devices that plug into a wall outlet, and then allow you to plug multiple items into it. The power strip provides an extra layer of protection between your devices and the outlet.

In this article I will talk about if power strips can protect against lightning as well as explain how this effects electronics in households.

They can protect against lightning, but only if the strip has a surge protector. This is an additional component that prevents damage from electrical surges and spikes. If your power strip doesn’t have one, it won’t protect your electronics from lightning strikes or any other kind of power surge. 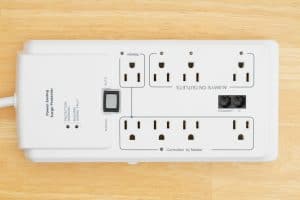 Power strips are designed to direct electricity away from your electronic devices and prevent them from being damaged by sudden surges in current (or “spikes”). They do this by using metal oxide varistors (MOVs), which are essentially resistors that act as fuses when exposed to an excess amount of current flow through them.

A power strip is a surge protector that connects to an outlet and, in turn, has multiple outlets on it. The power strip then connects to electronic devices such as computers, monitors, printers and other electronics.

Power strips have been around for many years, but they’re not commonly used in homes or businesses. There are several reasons why people don’t use them.

Some people think they are unnecessary because they don’t understand how they work or why they should be used. Others believe that if lightning strikes near their home, it will damage all of the electronics even if none of them are plugged into the power strip.

The truth is that power strips can protect your electronics from damaging voltage spikes caused by lightning strikes. However, there are some important factors that you need to consider before using one in your home or workplace:

Can Lightning Strikes Damage your Electronics?

Lightning strikes are not only dangerous but they can also damage or destroy electronics, especially if they are connected to power sources or plugged into a wall outlet.

Lightning strikes can affect your electronics if you are using them during a storm or if you have them near windows where they could be struck directly by lightning. Lightning can travel through electrical lines and even through telephone wires so it is important to unplug all devices before storms begin.

Lightning is made up of electrons moving at very high speeds. When a lightning strike happens, it sends out an electromagnetic pulse (EMP).

This EMP travels through wiring in homes and offices, damaging computers and other electronic devices. The EMP also affects electronic equipment that is connected to a power source through wires or a battery pack.

Read our blog here about do power strips get hot?

How Do You Protect Your Electronics During Lightning Storms?

Lightning is a powerful force that can come out of nowhere and cause serious damage to property and people.

It’s estimated that there are 1 million strikes per year in the U.S., with about 10 percent hitting structures like houses or buildings.

Even if you’re not in the vicinity of one when it hits, you can still receive electrical charges through wiring or even telephone lines — which is why you should unplug all electronics during lightning storms.

What To Do Before A Storm:

Here are some other helpful tips:

Should You Turn Your Power Strip Off During a Storm?

The answer is yes — but only if you have a surge protector, which is different from a power strip. Surges occur when there’s a sudden change in energy flow, such as when lightning strikes or a tree branch falls on a power line. The surge may travel through the electric system and damage electronics.

A surge protector acts like a protective barrier between your electronic devices and the power line. It contains metal oxide varistors, or MOVs. These MOVs absorb excess voltage and divert it away from your device so that it doesn’t get fried by the surge. A power strip doesn’t contain MOVs and thus isn’t effective at protecting your equipment from surges.

According to the National Fire Protection Association (NFPA), it’s OK to leave electronics plugged into power strips as long as they’re turned off. That includes computers and other devices that can be shut down before the storm hits — which is what you should really do with them anyway.

But if you want to protect your home appliances from damage during a storm, it’s better to unplug them directly rather than through their power strips. That way, if lightning strikes nearby, it won’t go through your appliance and into your outlet where it could damage other devices connected on the same circuit.

Is It Okay to Have Electronics Plugged in During Lightning Storms?

Some people have strong opinions about whether it’s safe to keep electronics plugged in during a thunderstorm. One camp says you should unplug all devices, while the other says it’s fine as long as you’re not using them at the time of the storm. Who’s right?

The answer is that it depends on the device and your location. If you’re somewhere where there are frequent lightning strikes, or if you’re in a particularly high-risk area like Florida, you should unplug your devices when it starts raining. But for most people living in the U.S., keeping electronics plugged in during a storm isn’t going to cause any problems. Here’s why:

Lightning strike risk is based on how much charge is available from clouds after they’ve been hit by lightning or large amounts of rain have fallen. If there’s enough charge, lightning can strike again — either nearby or far away from where it struck before — as long as there is enough conductive material around (like metal objects) for it to jump through before running into something insulating (like sand, water or concrete).

It has been said that a power strip gives you a little bit of safety from everyday electrical surges.

It all depends on the construction of the device, but you should consider other options for protecting your electronics from lightning strikes instead.

Again, it depends on what you’re trying to protect and how much money you want to spend. But the bottom line is that’s not the best option for protecting your gear.

Read our blog here about do power strips use electricity when turned off?