Should you unplug lamps at night or when they’re not in use?

In this article, I will explain if you should unplug when not using them and some useful tips for saving energy for lamps.

Should You Unplug Lamps When Not In Use?

It’s a good idea to unplug lamps when not in use, for safety reasons. If you have old lamps with worn wires they can cause shortages. However, you will not notice any difference on your energy bill from unplugging lamps at night. 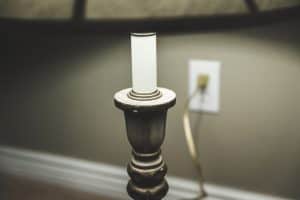 Is It Safe to Keep a Lamp Plugged in When Not in Use?

Yes, you can leave your lamp plugged in when not in use. However, there is a risk that you may forget about the lamp and it could overheat and catch fire.

Also, you need to examine lamps using old wires to make sure there are no bruises or dents on the wires and plugs.

Many people have lamps, TVs or other appliances that stay on all the time. Is it safe to leave them plugged in?

The answer is yes, but there are some important considerations:

First, as long as the device has an on/off switch and you’re not using it, it’s fine to leave it plugged in. An appliance that’s turned off but still plugged in may still use power from the outlet. This is called phantom power (or vampire power) because the device “eats” electricity even when it’s not being used.

The most common culprits for phantom power are laptop computers and cell phones (which may be charging even when off).

But any appliance that uses a small amount of electricity can contribute to phantom power: TVs, DVD players and stereos all use a little bit of energy even when turned off.

The amount of energy consumed by these devices can be significant enough for you to notice on your electric bill. Also, unplugging them might help reduce your carbon footprint as well.

Read our blog here about should I unplug a microwave when not in use?

Does Unplugging a Lamp Save Electricity (And Money)?

There are several reasons why unplugging lamps is beneficial to the environment. One of the most important reasons is that it reduces energy consumption.

An incandescent lightbulb (yes, just one) will cost you around $100-200 on the electricity bill per year – so there is money to be saved!

Some people might think that it’s OK to leave lights plugged in because they don’t use enough electricity for them to make a difference in their bill or carbon footprint. However, even small changes can make a big impact over time.

Should You Unplug Lamps When Going on Holiday?

Here are some things to consider when deciding whether or not you should unplug lamps when going away:

While it’s tempting to just turn off all the lights in your home when you go away, there are some things that should be left plugged in.

“There are certain items that shouldn’t be unplugged, such as refrigerators and freezers,”

“If they are unplugged, they could allow food to spoil and become a health hazard.”

Unplugging other appliances may also cause problems. If a refrigerator is left unplugged for too long, the contents will begin to spoil and emit foul odors. The same goes for TVs, computers, printers and other electronic devices with internal fans or motors that need constant power to run properly.

It’s also important not to confuse “off” with “unplugged.”

Simply turning off an appliance doesn’t mean it’s no longer drawing power from the outlet — it still may have standby power if its internal clock is still running.

Read our blog here about should you turn things off before unplugging?

Do Lamps Last Longer When Unplugged?

The short answer is yes, they do.

But there are some caveats to that statement:

Is It Bad to Unplug Your Lamps?

Some people think that if you leave a lamp on for a long time, it can be bad for your electrical system. Others believe that it is bad to leave your lamps plugged in all the time because of the power surge when you turn them on and off repeatedly.

But neither of these beliefs are based on scientific evidence.

The truth is that it does not matter if you leave a lamp on or unplug it after using it.

Can It Hurt to Unplug Your Lamp Every Night?

It cannot hurt the light bulb or the construction of a lamp to turn it off every night. It’s also fine to unplug it completely from the power socket. The lamp will not last longer when plugged in the whole time.

When you unplug your lamp before bedtime, you’re not only saving energy and money, but also helping to keep the planet green.

Lamps are one of the most common household items that get left plugged in all day and night.

Unfortunately, this leads to wasted electricity and a higher electric bill.

While there are no hard and fast rules about how long lamps should be left on, there are some good reasons why you might unplug them each night before bedtime.

The benefits of unplugging your lamps every night are numerous:

Check out this blog here about should I unplug washer & dryer when not in use?

Can It Hurt Your Lamps?

It’s important to note that if you don’t unplug your lamps every night, there’s no need to worry about any damage. “There are no adverse effects from leaving an incandescent lamp on all night,” says Jeff Smith, an engineer with the National Electrical Manufacturers Association (NEMA).

“The only thing that would happen is that they’d use more electricity.”

Here we have discussed the debate over unplugging lamps, which has raged on for years among energy-efficient lighting experts.

Electrical lights are highly efficient and consume a minimal amount of electricity when compared to traditional incandescent bulbs. Of course, that doesn’t mean electrical waste should be ignored.

So ultimately, my opinion is that it’s fine to unplug your lamps when they aren’t in use. I don’t see any reason that it would cause any harm, and you could potentially save yourself some money and electricity costs if you do.

In the age of smart homes and smart devices, there are some things you should be aware of when it comes to safety and energy efficiency. For example, did you know that leaving your lights on when you’re not home can cost you $100 a year or more?

According to some estimates, as much as 30% of our home electricity consumption is due to unnecessary standby power from electronics. And that’s not counting the costs from leaving appliances plugged in all day when they aren’t in use.