Screen mirroring, also known as media streaming or wireless display, is a way to share your phone or laptop’s screen with your TV.

It can be enabled by using a third-party app or pressing a TV remote button to activate it.

In this article, I will explain why this might be true and help explain some tips that could speed things up.

Yes, it can slow down your Wi-Fi. Screen mirroring is simply another device connecting to your network, which will use up some of your bandwidth. The application itself doesn’t use much speed to function but a slow internet speed can cause problems. 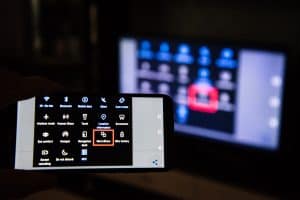 With most smartphones and tablets, you can quickly reduce the amount of data being used during screen mirroring by turning off audio and video that you don’t need.

This can make all the difference in how smoothly your experience goes.

If you’re new to the world of screen mirroring, you might be wondering how it works and if it slows down your Wi-Fi.

Now let’s talk about how these two things relate to each other:

How Come My Wi-Fi Is Slower When Using Screen Mirroring?

Whether you use screen mirroring with a Fire TV Stick, Miracast, or Apple AirPlay, the basic idea is to wirelessly send video from your computer or phone to a bigger screen.

However, this can sometimes cause lag in the Wi-Fi connection.

Screen mirroring is often called casting because it sends your device’s content to another display—just like you would cast individual shows and movies to a TV using something like Chromecast.

But there are several ways that devices can connect wirelessly: over Wi-Fi, Bluetooth 4.0 (or newer), using Wi-Fi Direct (also known as peer-to-peer), or using Miracast technology.

Which of these protocols is used depends on the type of devices being used and other factors such as whether multiple people are casting at once in the same home network.

While screen mirroring can affect your Wi-Fi connection, it doesn’t have to. Whether or not it does depends on the speed of your Internet connection and the strength of your network signal.

The Wi-Fi speed depends on both the sending and receiving devices. Some devices are indeed more powerful than others, but several other factors play a role in a good user experience when it comes to screen mirroring:

How Does Screen Mirroring Work?

Screen Mirroring is a technology that allows you to mirror your device’s screen on your TV screen wirelessly.

This means that everything you see on your device screen will also be displayed on the TV screen.

So, if you want to play games, watch movies, or show pictures and other media files on a big screen, then the best way is to use screen mirroring.

It’s important to realize that Screen Mirroring is not like casting because only specific apps are supported in casting. At the same time, with Screen Mirroring, everything that’s being done on the mobile device can be mirrored to the TV.

You can quickly check the effect the connection has on your Wi-Fi network. To do this, you need to check the speed of your network with and without screen mirroring.

The easiest way to do this is to use a speed test app on your phone or tablet, but you can also use Google to determine your speed.

The little box that appears will allow you to test your Wi-Fi speed.

It will let you know how fast your internet connection is at that moment and provide other helpful information.

To do this test:

How Much Bandwith Does Screen Mirroring Use?

Screen mirroring itself is not a bandwidth-heavy process. It typically uses around 1Mb/s, which is less than the average Wi-Fi speed in the U.S. (35.9Mb/s).

However, the video streaming service will use more bandwidth, especially if you’re watching high-definition content.
Netflix recommends a minimum of 3Mb/s for SD and 5Mbps for HD viewing.

Screen mirroring a movie may be possible at lower speeds, but you may have issues with buffering and lag time, mainly as your connection fluctuates or when other devices use Wi-Fi.

Suppose you’re planning on screen mirroring HD content from your mobile device to a TV via Google Chromecast or an Apple TV. In that case, it’s best to have fast internet (over 12Mbps) for the smoothest performance and best picture quality.

Read about does Facetime slow down wi-fi?

Can You Stop Screen Mirroring From Interfering With Your Wi-Fi?

The fact is that it depends on what kind of router you have.

This is because the problem is actually with your router, not with your devices or the screen-mirroring technology itself.

When you mirror a device’s screen to a TV, it sends a constant stream of data through your network—but some routers are just not that great at handling this kind of heavy traffic.

If your Wi-Fi goes out regularly when you’re mirroring something, it’s probably not because of anything you’re doing wrong; it’s because your router wasn’t made to handle streaming in the first place (or because it’s an older model).

It might be time to consider upgrading to a better model.

If you’ve made the switch and are still having problems, there are a few other things you can do to fix your Wi-Fi issues:

In order to stop screen mirroring from causing interference with your Wi-Fi network, you need to turn it off on all of your devices. This includes:

If you’re wondering how to turn off screen mirroring on your TV, there isn’t a straightforward answer—it depends on the brand of TV you have.

You may need to consult its manual or call tech support to figure out how to turn it off. On an iPhone, simply swipe up from the bottom of the screen and tap AirPlay Mirroring. Then tap Off.

The most likely culprits are other devices using your Wi-Fi at the same time and/or a weak signal that’s been affected by device placement or walls or ceilings blocking the signal.

If you are experiencing a slow internet connection while screen mirroring, ensure that you’re getting a solid home Internet connection. Make sure to check your device placement in relation to where the router is located (preferably in the same room).

Read more about does google nest slow down wi-fi?