If you’re into free channels and want to get the most out of it, then you should consider getting a BT TV Box.

It allows you to save, backtrack and rewind TV programs, just like what streaming sites as Netflix does.

But can’t a smart TV do that?

About Smart TVs and the BT TV Box:

The BT TV Box provides users with extra content and features for free channels. The box is stylish and a good choice for smart TV owners who want additional channels. 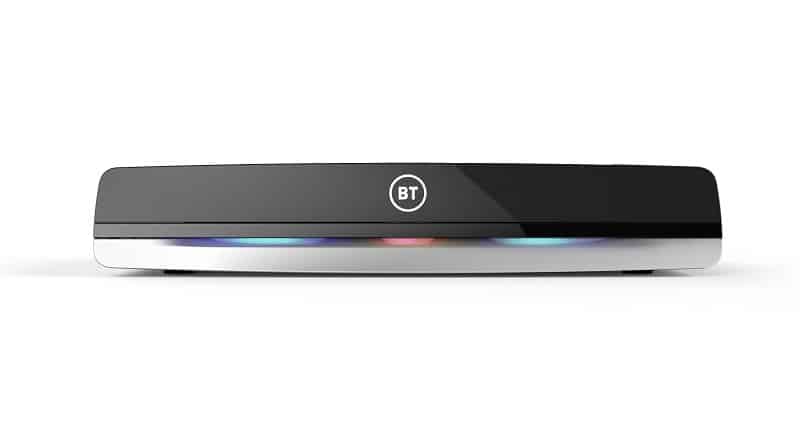 If you don’t watch free TV often, you won’t be able to maximize the features of the BT TV Box.

But, if you watch a lot of content on free TV and want the ability to backtrack any programs you missed, then the BT TV Box will be a welcome addition.

You only need to plug the BT TV Box’s HDMI output into one of the HDMI inputs of your smart TV.

You then connect the Ethernet cable to the BT hub to get exclusive channels on your TV.

3. Can I Connect my BT TV Box Wirelessly?

The BT TV box does not provide wireless connectivity.

It was announced that there are plans to include a firmware update that will enable Wi-Fi connection.

4. Does the BT TV Box Still Work Without a Subscription?

You need a subscription to BT if you want to use the BT-exclusive apps.

Your TV will still record and provide exclusive channels without a subscription, but you won’t get the BT content.

One of the main features of the BT TV Box is its ability to record videos.

Aside from recording, you can also backtrack content from up to a week for a catch-up.

6. Does BT TV Box Work with All the Major Brands?

The BT TV Box works with all major brands, such as LG, Samsung, Sony, and Vizio.

As long as your TV has an HDMI port, you can use the BT TV Box.

7. Do you Need Internet for the BT TV Box?

You can use the BT TV Box without an Internet connection, but the functions will be limited to content from free TV and viewing of recorded videos.

8. Is the BT TV Box the Same as the YouView Box?

The BT TV Box and YouView Box are the same devices.

The only difference is that the BT TV Box gives you access to exclusive content from BT.

9. Is the BT TV Box the Same as the Roku Streaming Stick?

The BT TV Box and Roku Stick are different when it comes to function.

The BT TV Box can provide free view channels, while the Roku Stick provides content through apps (Roku calls their apps, channels, by the way).

The two devices are different.

While you can get video on demand through the BT TV Box, the Fire TV Stick is designed to give your TV another flavor when it comes to the smart platform.

The BT TV Box should be seen as the Fire TV Stick for over-the-air content and a few more features.

11. Is the BT TV Box the Same as Digital TV Box

Yes, the BT TV Box works as a Digital Terrestrial TV Box that provides access to different channels in the United Kingdom.

Depending on your end goal, a BT TV Box may or may not replace cable TV boxes.

If you’re just after getting free channels that are also on cable, then you can use a BT TV Box.

But, for those who want cable channel access, the BT TV Box cannot work as a cable TV box.

You can add the BT TV Box to Alexa by looking for the YouView skill since the former is based on YouView.

You can use the BT TV Box to cast a video from a compatible smartphone app but are limited to the apps that it can install.

As the BT TV Box only supports up to 1080p resolutions, the best TVs that would work well with it can scale up resolution decently, especially if you want 4k resolutions.

Here are some suggested TVs to consider:

The C1 series from LG is a popular choice for smart TVs because of the premium features and a few weak points.

But even as LG markets this product as an entry-level, the way it performs feels like it’s more than just an entry-level smart TV.

The C1 features an OLED display, which helps you get consistent image quality almost every time.

It also has wide angles, which lets you enjoy watching your favorite programs wherever you decide to sit in the room.

The C1 can handle different lighting in rooms. It can get bright enough to reduce glare and reflections.

If you like watching at night, the C1 can turn off single pixels for perfect blacks, making it a great TV to use to end the day.

While the OLED screen is one of the key features of the C1, unfortunately, it is also the weakest link of the TV.

Like many other displays that use OLED, the C1 is prone to burn-in, which burn-in can prevent if you rotate content frequently and do not leave a static frame for long.

Another weakness of the C1 is that colors do not pop as much in HDR.

If you don’t like the risk of burn-in from OLED TVs, consider getting the Samsung Q80T.

The Q80A assures you of quality images all the time.

It has a VA panel that can render deep blacks and a full-array local dimming to enhance the imagery. That makes the Q80A ideal for nighttime watching.

The Q80A has no problems in bright rooms or for daytime use. Glare and reflections are managed well so that you won’t have any annoyances.

The color accuracy on the Q80A is very exceptional.

HDR content is also its specialty, thanks to its wide color gamut that helps emphasize highlights without any problem.

The Q80A also has wide viewing angles, ideal for those who tend to move around while watching TV.

Now, not everything is perfect, and the Q80A is no exception.

This smart TV may have some uniformity issues, which is not that noticeable. But if you have an eye for detail, especially with video devices like smart TV, then you may notice it.

The Sony A8H is another powerful smart TV that works well for watching TV shows and scaling up lower resolution content.

The A8H uses an OLED display and can render perfect blacks for late-night watching. It does not have a backlight that may cause excessive brightness on the screen, which can be a nuisance.

The A8H can convert 24 fps content to 30 or 60 fps without issues but may sometimes stutter at lower frame rates.

The A8H can manage it well for reflections, as this smart TV comes with wide viewing angles.

If you like watching content from lower resolutions, the A8H can upscale to 4k without any problems, although it still works best in converting 1080p to 4k.

The A8H also performs well in HDR content. It has a wide color gamut that lets highlights pop without excess glows.

Its weakness is its OLED panel, like other smart TVs that use it. The risk of burn-in is there, but it won’t be a problem if you watch different content.

YouView: Everything you need to know