If you’re a new or expecting parent, the odds are good you’re either in the market for a baby monitor, or at least wondering whether you need one or not.

And even if you’re sure you want one, the decision-making isn’t over yet: you still have to decide what kind of baby monitor to get. Wi-Fi? Non-Wi-Fi? Video? Audio Only?

Concerns have been raised about the safety of Wi-Fi baby monitors, but there’s no denying it’s pretty convenient and reassuring to see your baby’s face even when you can’t physically be there.

So today, we’re going to examine whether video baby monitors that don’t use Wi-Fi exist and if so, which ones might be best for your parenting needs.

Here’s Whether All Video Baby Monitors Use Wi-Fi or Not:

Baby monitors are a popular device used to assist in the parenting of infants by facilitating ease of observation of one’s child. The monitor device may have a video camera, or audio only, and may communicate with the receiver via radio waves, Wi-Fi internet, or a wired connection. 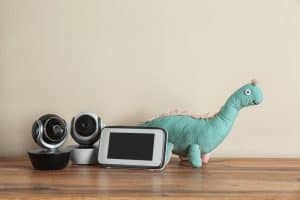 What Non-Wi-Fi Baby Monitors Have Video?

We can see from the above description that we’ve basically already answered our original question: non-Wi-Fi baby monitors undoubtedly still exist, even some with video feeds.

So the next question is: which ones are the best, most reliable, and most worth your money? Let’s take a look.

Right off the bat, we can highly recommend this baby monitor by Moonybaby, featuring a 1,000-foot range, two video cameras, and an assortment of helpful features like talkback and lullabies.

Since it uses a secure radio frequency for wireless connection and does not connect to the internet, you can also rest easy that your monitor is extremely unlikely to be hacked.

A good list needs more than one entry, though, so for a few more ideas and suggestions, we turn to parenting blogs like this one.

Check out the full list if you need more ideas, but we’ll go over a few of our favorites from it below:

So as you can see, there are plenty of options out there. The above list, plus our top pick from Moonybaby, are only a fraction of the non-Wi-Fi Video baby monitors you could be choosing from.

So if you want a wireless video baby monitor, but are worried about the frightening possibility of being hacked, check out any of the options above or do some searching of your own!

How Do Non-Wi-Fi Baby Monitors Send a Video Signal?

To answer this question, all we have to do is look back in time, just a little bit.

Did you know baby monitors were first invented in 1937? And wireless internet, or Wi-Fi, was only introduced in 1997!

So clearly, early baby monitors could not have used Wi-Fi, and it might surprise you to know that non-Wi-Fi baby monitors today use more or less the same technology as they did before Wi-Fi was even invented.

That technology, put simply, is radio waves. Yes, the same thing walkie-talkies, remote-control toys, and car radios use to carry out their respective functions.

Of course, modern radio-based baby monitors are more reliable and secure than their older counterparts, but the basic principle is the same and remains far harder to hack than any internet-based monitor.

And about that, did you know Wi-Fi baby monitors are extremely susceptible to hacking?

If this idea scares you, it should, and it’s the main reason many parents are exploring alternatives to Wi-Fi monitors, even if Wi-Fi is more convenient in many ways.

You might wonder if anyone would even do such a heinous thing as hack a baby monitor, and why.

The answer, sadly, is yes, there are creeps out there who would spy on your baby through a hacked monitor, and it’s happened before. As for the why of it, we won’t even begin to speculate.

The reason baby monitors are even vulnerable to this kind of attack is that anyone, anywhere in the world with the right technical savvy could theoretically tap into the feed since the Internet can obviously be accessed worldwide.

By contrast, a radio-based baby monitor, which is what all wireless non-Wi-Fi baby monitors are, only broadcasts its feed over a certain range, usually about 1000 feet.

While a radio baby monitor can still theoretically be hacked, it’s more difficult and requires someone to actually physically be within that limited range.

Put another way, with a Wi-Fi monitor you’re vulnerable to any creep with an internet connection, but with a radio monitor, someone would have to be your next-door neighbor or lurking on your front lawn, to even get the chance.

It’s for this reason that many parents concerned about the security of their baby monitor feeds are turning to older technologies with a shiny new coat of paint, in the form of non-Wi-Fi monitors.

Do BT Baby Monitors Use Wi-Fi?

BT is a popular baby monitor brand with a variety of models on the market.

Given the large variety of options that exist under the BT brand umbrella, asking if BT monitors use Wi-Fi is almost a trick question because it’s unlikely that every single model will have the same answer.

For instance, BT offers several Smart Baby Monitors that absolutely use an internet connection and are therefore vulnerable to hacking.

However, they also offer a range of Audio-Only Baby Monitors that we doubt would need to use the internet. There is also a category for Video Monitors which is not labeled as “smart.”

That all being said, BT does not make it clear on their site which monitors use the internet and which, if any, do not.

Their descriptions are frustratingly opaque in this way and neither confirm nor deny a given connection method.

The brand does seem alarmingly concerned with adding “smart” features to almost every model, however, even the audio-only monitors, to integrate them with Alexa, Google Assistant, and so on.

While it’s not clear whether BT offers any definitively non-Wi-Fi monitors, integrating them with digital assistants like Alexa could provide an internet-based vulnerability to their entire line of products.

for this reason, we’d be cautious when buying from BT if you’re concerned about your monitor being hacked.

Read our blog here about what is the range of summer infant baby monitors?

Do Oricom Baby Monitors Use Wi-Fi?

Another popular and trusted brand, Oricom likewise seems hesitant to use clear, declarative language about whether its monitors use the internet or not.

That being said, they’re also less concerned with foisting “smart” technology to every single monitor in their lineup, and it looks like they probably offer both Wi-Fi and non-Wi-Fi options.

Oricom has a range of smart baby monitors that very much do use the internet. If you’re concerned about hacking, avoid these.

However, they also have a range of video monitors and audio monitors that appear to be based on radio technology rather than the internet.

So if you want a non-Wi-Fi baby monitor and are considering the Oricom lineup, you’ll probably be safe with any of the options that aren’t in the “smart” category.

That said, we recommend doing your own research to be as sure as possible before making this or any other nontrivial purchase.

Especially when brands seem hesitant to clearly state whether a unit does or does not use the internet, reaching out to customer service to ask this question directly could make the difference between a satisfying purchase and a frustrating mistake.

Read our blog here about the battery life of VAVA baby monitors.