Singers want to sound good all the time, not just in the shower. For some, it’s a fun hobby, but for others, it’s what puts food on the table.

The wrong microphone setup could mean the difference between getting booked for the next gig or not. 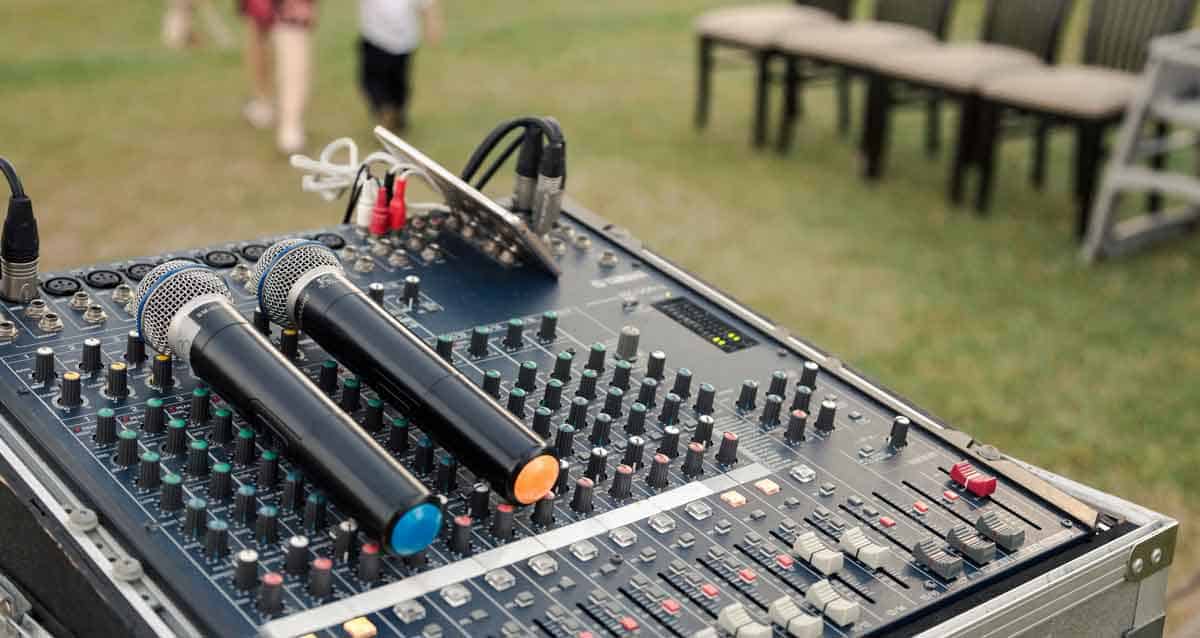 Why do People Use Two Microphones?

Live streamers, presenters, and singers may use two microphones but for different reasons:

Is it Better to Record with Two Microphones?

The most important tool for the recording engineer is the microphone. But are two always better than one? Believe it or not, it only takes one good microphone to produce a quality record of a whole band (although it might take some doing!)

So if a single microphone can be enough for an entire band, why would anyone want to record with two microphones?

Let’s Start With a Little Bit of History:

It turns out that many years ago (think the 1970s), the use of two microphones was a common practice. Back then, microphone splitters were both expensive and unreliable.

Microphone splitters are devices that take input from a microphone, then send those signals to two different recording systems.

Without a microphone splitter, the recording staff had to find a creative way to get their feed while recording live concerts. The singer was already using the public address vocal microphone. So they used tape to stick a second mic to it.

Nowadays, there are many affordable and dependable splitters. So, in this modern era of music technology, why would singers use two microphones while recording their vocals or performing live?

Singers may prefer to use two microphones for one or more of the following reasons:

Using two microphones can be helpful for a singer who wants to capture a special combination of vocal sounds.

(Of course, the “vocal instrument” is simply the singer’s mouth!)

This arrangement presents the ideal way to capture highs and lows from a natural position while blending in the frequencies from the second microphone.

No two microphones are equal, and they all have different features. You can create different moods for a song by using two mics with different characteristics.

Then some singers might even use the same type of microphone (two condensers or two dynamics), but each has different features.

In the end, using two mics simultaneously will help a singer create different moods for a song or fine-tune the sound – and that can make or break how a listener connects with it.

When it’s time for the mixing engineer to step in, the singer’s job is done.

The work of the mixing engineer could get a boost if the singer used two different microphones. Having two distinct tones to work with will improve the mixing flexibility.

Bear in mind that this only happens if two different mics are used: if the microphones are the same, the mixing engineer will have the same output as one microphone.

Using two mics to cancel ambient noise is well known and popular in many useful applications.

One microphone is directed to the user, and the other one faces outwards. The result is that any active noise is reduced, and the recipient will be able to hear clearly. Similarly, a singer can use two microphones to reduce the effects of noise while performing live.

When a singer is in front of a noisy crowd, it might be hard to hear the singer’s voice. The noise from the audience can even make a singer sound less good.

That’s when singers use two omnidirectional mics. One can be set up a few inches away from the singer’s mouth compared to the other.

But this doesn’t just apply to singing live before a noisy audience. It is also effective with noise cancellation when recording in a less quiet environment.

Different musicians will use two or more mics in different ways.

Rappers will often prefer to put out a heavy, harsh sound. To do this, they can mix two mics on a track.

On the other hand, there are lots of singers who opt to use two mics. In this case, they are looking for an open, clear, and resonant sound.

What Happens When you use Two Microphones Together?

So what’s so special about using two microphones? How does this all work?

Here is what happens when two microphones are used at the same time.

But, both mics will collect the surrounding noise equally.

The drawback is there is always an overall reduction of even the wanted sound. It’s only minimal, and the benefit far outweighs this very slight disadvantage.

Are Both Microphones Normally turned On?

There is no dummy microphone in a two-mic setup if you’re wondering. Yes, both mics will be on.

Here’s the logic behind having both microphones on, especially if they are used for noise cancellation.

But that’s when singers use two mics. In the corporate world of speeches, things are a bit different.

Although two mics would be visible for corporate shows, only one microphone would need to be active at a time. The other would be for backup or, you might say, redundancy.

I wouldn’t want the CEO getting angry because his mic went out on him!

Why do Some Singers use two Microphones Taped Together?

Taping two microphones together sounds slightly different from the arrangement we have looked at for canceling noise.

Using taped microphones was a two-mic format that involved no distance between the two microphones. To achieve this, singers would have two mics taped to each other.

The purpose of this layout was also to eliminate (or, at best, reduce) noise reaching the PA system.

Do Singers Actually use Both Microphones?

In any two-mic setup, the purpose will be slight variations in how the mics are used. If you aim to use microphones to capture different aspects of a singer’s voice, you will use both mics.

In the case of noise cancellation, only one mic will be used by the singer as a primary mic.

There are other times when using two microphones might even be just an artistic matter!

What Is the Difference Between Mixing and Mastering?

What are Omnidirectional Microphones?

Recording Your Band With Only One Microphone [Video]