Apple Music is a fantastic service for those who can never get enough music in their lives, letting you stream to your heart’s content from a vast music library.

But what if you don’t just want to listen, but to sing along, too? Karaoke is a popular pastime for those who love music and don’t want to suppress the urge to sing along.

But can Apple Music fulfill this need? Well, keep reading, because that’s precisely what we hope to answer today! 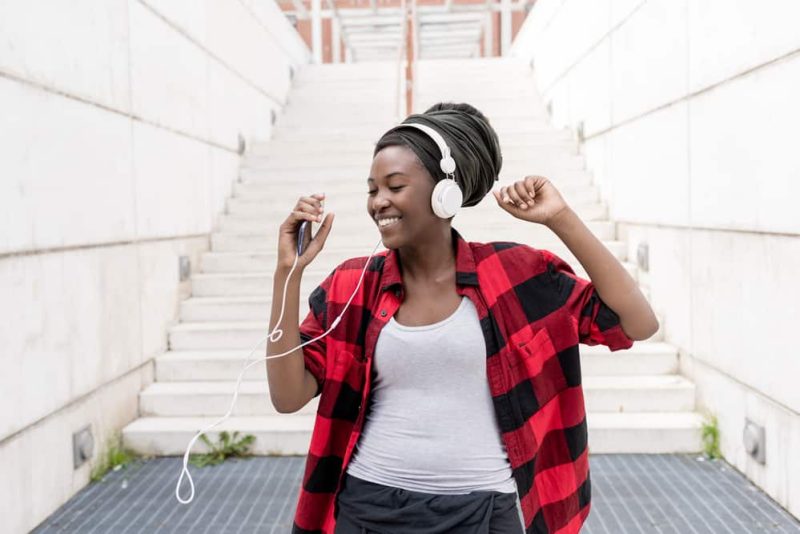 Does Apple Music Have a Karaoke Feature?

In fact, as of very recently, Apple Music does have a dedicated Karaoke feature.

This brand-new feature, dubbed “Apple Music Sing,” was just announced on December 6th, 2022, and promises to let you turn your favorite tracks into a full-on karaoke experience.

It hasn’t actually launched for regular users yet but is promised later this month for iOS devices and the new Apple TV streaming box.

It’s unclear if third-party apps, like the Apple Music app for Android phones, will get this feature or not, but if they do, it probably won’t be right away.

A lot of other details are sparse, too, like how many artists, albums, or tracks will actually be available for Apple Music Sing.

It seems unlikely that the Sing feature will be available for every single track that already exists on Apple Music since additional work is required to display the lyrics and remove vocal tracks.

Regardless, it is a dedicated Karaoke feature, and it is coming later this month.

So if you’re an Apple Music subscriber on an iOS device who just wants to sing Karaoke with your Apple Music library, you may soon get your wish!

Does Apple Music Have Non-Vocal Versions for Karaoke?

The coming-soon Apple Music Sing feature will definitely feature tracks with the vocals removed for use in Karaoke sing-alongs.

However, when it comes to the main library of Apple Music as it exists now, before the implementation of Apple Music Sing, it’s a bit more complicated.

However, Apple Music itself does not have any kind of rule of always including instrumental versions.

Therefore, it just depends on whether a particular artist has decided to release instrumental versions or not.

If they have, you’ll probably find those versions on Apple Music, just like the rest of their content. In that case, you could absolutely use these instrumental tracks for Karaoke.

You might have to fiddle around with the app or print out lyrics (unless you have them memorized), since instrumental tracks may not be made with Karaoke in mind.

And unfortunately, if a given artist or their record label simply hasn’t ever decided to release instrumental versions of their music, you might be out of luck.

Can you Sing Along with Apple Music?

You certainly can; nothing’s stopping you from singing along while you listen to Apple Music, except maybe social embarrassment if people are watching.

Apple Music isn’t necessarily designed with singing along in mind, but it also can’t stop you from doing so anyway.

And Apple Music does have a lyrics view that lets you see all the lyrics of a song typed out, making it easier to sing along with your favorite artist if you want to.

Of course, singing along with a song’s vocal track is different from Karaoke, where your own vocals replace the original vocal tracks instead.

Regardless, if all you want to do is sing along, just hit the lyrics view and sing to your heart’s content!

Apple Music Sing isn’t released yet, but given that it’s intended to be a dedicated Karaoke mode for Apple Music, it’s certainly trying to be ideal for Karaoke.

Whether or not it will be successful isn’t something we can be sure of yet, since the feature isn’t slated for release until later this month.

However, given it promises easy-to-read lyric displays, vocal-free Karaoke tracks, and even duet and backup vocal options for singing with friends, it certainly looks ideal for the task.

We’ll find out for sure later in December, so if you’re an Apple subscriber on a compatible device, you can look forward to finding out for yourself very soon.

What Is the Easiest Way to Sing Karaoke with Apple Music?

Well, once it releases, Apple Music Sing is likely going to be the easiest and most user-friendly way to sing Karaoke on Apple Music.

However, if you want to give it a go right now, or if you’re not on a compatible device for Apple Music Sing’s release, there are other things you can try.

It’s also worth noting that we don’t know how many songs will be available on Apple Music Sing, so even after it releases, you might need alternate methods if your favorite song isn’t on Sing.

For the best Karaoke experience on Apple Music without Sing, you’ll want to search for instrumental versions of the songs you want to sing Karaoke with.

Unfortunately, if instrumental versions don’t exist, you won’t really be able to get the whole Karaoke experience.

Fortunately, it’s pretty common for artists to release instrumental versions of their songs, so while not a guarantee, odds are good you’ll find what you’re looking for.

Once you find an instrumental version of the track you want to sing Karaoke to, look up the lyrics of the original version and print them out.

Now, with the printout in hand, you can play the song on speakers and sing the vocals yourself!

It isn’t quite as good as a proper Karaoke setup, since you’ll have to remember when to start singing, but if it’s one of your favorite songs, you probably have it mostly memorized anyway.

What Is the Best Music Streaming Service for Karaoke?

Well, if Karaoke is what you’re after, it turns out there are streaming services exclusively dedicated to Karaoke.

So if you want an ideal Karaoke experience at your fingertips, you’re better off looking at one of these dedicated services as opposed to “regular” music services like Spotify or Apple Music.

For a full list of such services, check out the last link under “Sources” below to see a top ten!

A lot of them are intended for businesses rather than individuals, however, and are prohibitively priced as a result.

For an affordable individual-user experience, there’s an app called “Singa” that will run you $9.99 per month.

Singa even has a free version with fewer features and a premium subscription with more.

Even at the most basic level, though, Singa has what you need for Karaoke, with vocal-free tracks, intuitive lyric displays, and everything else you’d expect from a Karaoke app.

However, if you’re a Spotify user looking for a karaoke feature, then also read our easy-answer guide to your questions about Spotify and Karaoke.