Apple Music is an expansive music streaming service with a huge library and a direct rival to the preexisting giant of Spotify.

But what if you don’t own an Apple device or you prefer android devices? What if you have a mix of different devices? Perhaps you just want to listen to Apple Music on your Windows PC.

Well, you’re in luck because Apple Music does exist for Android mobile devices and Windows PCs, and today we’re going to take a close look at how it performs on these devices.

How to Listen to Apple Music on Any Device: 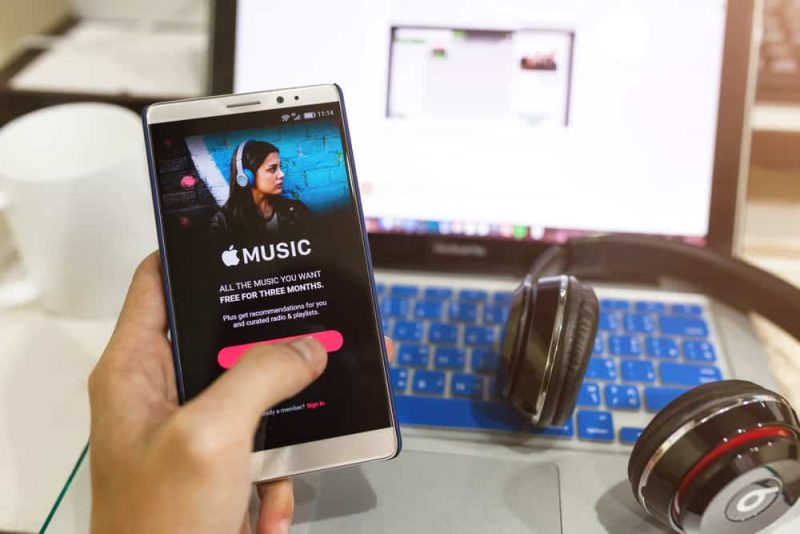 Can You Listen to Apple Music on any PC?

It is important to remember that “PC” means “personal computer,” and while many people use it as a shorthand to mean “Windows PC,” the term is actually generic.

This is relevant because personal Linux computers are also PCs, and Apple Music does not have Linux support. In other words, Apple Music is not compatible with all PCs.

Apple Music can, of course, be used on Mac/Apple PCs, but it can also be used on Windows PCs running Windows 10 or 11.

To use Apple Music on a Windows 10 or 11 PC, you actually have two options.

The first option is the browser-based Apple Music interface at music.apple.com.

Apple Music offers the full experience to subscribers via this webpage, with no apps or downloads necessary.

You’ll just need to go to the webpage, then sign in to your paid Apple Music account.

In theory, any web browser should work for this, though we can’t say for sure how well it works on any specific browser, but mainstream ones like Firefox and Chrome should be fine.

You might even be able to use Apple Music on Linux—which doesn’t have official support—through the web browser option, but we can’t confirm whether this works or not.

Despite being a web browser interface and not an app, the webpage version of Apple Music is very similar in format and appearance to the Apple Music app.

So if you’re used to using that app but want to quickly access your music from a Windows PC, the webpage is a great way to go.

The second option for using Apple Music on a Windows PC is to go through the iTunes app.

You’ll want to download and install the app if you haven’t already.

You can then browse and search Apple Music selections with the iTunes app and should be able to access all the same features as you would with the Apple Music app on iOS or Mac.

If you’re used to the Apple Music interface, accessing the same content through the iTunes app might take some getting used to.

On the other hand, if you were used to iTunes before it got split into several separate apps, you might enjoy being able to use the old iTunes app just like you used to.

Either way, all the same content is available; you just might have to navigate the interface slightly differently than you do on the Apple Music app.

Can You Listen to Apple Music on all Android models?

You can run Apple Music on any Android device running Android 5.0 Lollipop or later.

This means only particularly old, outmoded android devices that can’t upgrade to 5.0 or higher would be unable to run Apple Music.

However, any Android device with 5.0 or later and active service should be compatible with Apple Music.

In fact, the Android app is virtually identical to the iOS one, so if you’re used to using Apple Music on Apple devices, you shouldn’t have any trouble at all getting used to the Android app.

If you don’t use Android or Apple products, you might be wondering, “Does Apple Music work on my device?” In our article, we checked 20 devices to very their compatibility with Apple Music.

Is the Sound Quality the Same on PC & Android vs. Apple Products?

The device from which you access Apple Music really shouldn’t affect the sound quality at all.

The device and app you use are just intermediaries; after all, the music is being streamed from Apple’s servers at the same bitrate, no matter what.

So yes, as far as we know, the sound quality is the same across all device types, and there’s no reason to expect any differently.

The only hardware that should affect your sound quality is your actual audio equipment, such as headphones, speakers, etc.

You should also still have access to the lossless audio option that Apple Music offers, at least as long as you’re not using the cheaper Voice plan, which lacks this feature.

If you’re using any other subscription besides Voice, though, you should be able to stream and download lossless audio from any device. And at that point, you’re getting the music in a quality that literally can’t be beaten, so it definitely won’t matter which device you’re listening from.

The only other factor that might impact your listening experience is internet speed because if you have a poor connection on one of your devices, there could be interruptions.

This doesn’t technically affect the sound quality, but it can potentially make the listening experience untenable if you’re experiencing frequent interruptions.

However, this is pretty unlikely to occur unless you have an extremely weak signal somewhere because music streaming is optimized to work even on slow internet connections.

Are There Any Issues that Arise When Using Apple Music on PC/Android?

The biggest issue on Windows PCs is that the user interface may take some getting used to on the iTunes app if you’re used to the Apple Music app.

However, this can be solved if it really bothers you. All you need to do is use the web browser version instead, which is more similar to the Apple Music app.

There is also a small but potentially annoying issue that can arise from the Android Apple Music app. Your ‘currently-playing’ music sits in your notifications when you’re playing music and tap away to do something else on your phone.

This is fine and lets you listen to it while doing other things, but the problem arises when you accidentally clear the notification, which will stop your playback.

It’s not a terribly damming problem, but it can get annoying, especially if you clear all notifications at once.

It’s easy enough to avoid accidentally swiping away the Apple Music notification that’s keeping your music playing. But, if you “clear all,” it’ll get swept up with the rest, and your music will stop.

That’s really it when it comes to problems we could find, though.

The use of iTunes on Windows while Apple has ditched the app in favor of a slew of different ones can be slightly disorienting, but everything still works.

With all this in mind, we can safely say there aren’t any major, experience-breaking issues with using Apple Music on non-Apple devices.

However, if your issue is that your Apple Music is playing at a slow speed, it is likely due to some other glitch and not your Android or PC’s compatibility with Apple Music.