If you’re like many parents, you probably use a baby monitor to keep an eye on your sleeping child. But is it possible for hackers to gain access to your baby monitor and spy on your little one?

This may not seem like a concern for most parents, but we’ve seen some alarming reports about this issue.

In this article, we’ll look at whether or not hackers can get into your baby monitor—and what you can do if they do.

Here’s If Audio Baby Monitors Can Be Hacked:

Audio baby monitors can be hacked, and there have already been several cases of this happening in the past few years. As with any other piece of technology, audio monitors are vulnerable to hacking because they can transmit sensitive information over wireless connections. 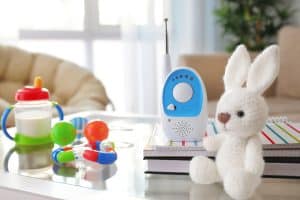 When not on wifi, the risk is low of being hacked.

When on wifi, there’s a higher risk that hackers can gain access to your device through public networks or through public hotspots from nearby businesses and cafes.

If not connected to other devices, there’s less risk involved since only your audio baby monitor will be accessible by someone with bad intentions (though they could still listen in).

To help prevent someone from hacking into one of these devices and listening in on your conversations with your child(ren), unplug it when it’s not being used (or turn off its power switch). That way no one else can connect to it either!

Can Audio Baby Monitors Be Hacked?

As you’d expect, yes, audio baby monitors can be hacked.

Recently, there have been several reports of hackers being able to access the microphone on some models of audio baby monitor and listen in on other people’s conversations.

They do this by using a simple software program that allows them to connect to your wi-fi network and then intercept the signal between your device and the base unit.

Whether or not this is an actual danger depends on how secure your wi-fi network is; if it’s not password protected or encrypted then anyone within range could potentially access it.

Also depending on how well designed a particular model of audio monitor is in terms of its hardware specifications will determine how easy it would be for someone else to hack into it—some are more vulnerable than others!

Why Does My Audio Baby Monitor Sound Like It’s Being Hacked?

There are a few reasons why you might think your audio baby monitor is being hacked:

Read our blog here about can video baby monitors behacked?

Why Would Someone Hack a Baby Monitor?

You may be wondering why someone would hack a baby monitor. If you think about it, the reasons are pretty easy to assume:

To listen in on the baby’s room and hear what’s going on:

Are There Any Reports of Audio Baby Monitors Being Hacked?

The simple answer is no.

There haven’t been any reports of audio baby monitors being hacked, and there’s no evidence that it’s happened in the past, will happen in the future or in any country or state.

There are a few possibilities for why this could be:

Can You Check If an Audio Baby Monitor Is Being Hacked?

If you’re worried about a hacker gaining access to your baby monitor, there are ways of checking if your device is being hacked.

Check the sound on the audio baby monitor

If you hear any strange noises or sounds coming from the device, it has been hacked. It might be a strange clicking noise or something else that doesn’t belong in a regular conversation.

If you hear these noises loud and clear, then you need to disconnect your baby monitor immediately and find out what’s going on.

If there is any unusual activity happening around where your child sleeps (or other places where they could potentially be).

Then this could signal someone hacking into your home security system remotely using voice commands over an app installed on their phone or tablet device connected wirelessly via Bluetooth 4G/5G wifi signal strength.

Which allows them access remotely without having physical access themselves through wired connections such as ethernet cable which can lead back into our homes via modem/router so watch out!

Can You Protect an Audio Baby Monitor from Hackers?

To protect yourself from hackers, it’s important to do the following:

Encryption is the process of converting data into a code that can only be decoded by the intended recipient.

This type of technology is often used for secure communications, such as online banking and email.

It’s also used in other applications like audio baby monitors to ensure that only those with access to the encryption key can decode the signal.

Some parents may feel more comfortable knowing their audio baby monitor is encrypted, but others may not care about this feature at all—the choice is up to you.

If you’re looking for an audio monitor with strong security features and are worried about hackers listening in on your conversations, encryption could help keep them out.

However, if you don’t think privacy matters much or don’t have any reason to think someone would want access to your conversations through your monitor, then it might not matter if your model has encryption or not (unless there’s some other feature that’s important).

Can Audio Baby Monitors Be Hacked When Not on Wi-fi

When you’re not connected to the internet, you can still use your baby monitor.

As long as it has a speaker and microphone, you can use it to communicate with your baby. This can be done through:

Check our blog out about can BT baby monitors be hacked?

We hope you enjoyed reading this article as much as we enjoyed researching it. Since this type of topic is so emotionally charged, it’s difficult to find information online that is unbiased and easy to understand.

We’re here to make sure that you have access to the most accurate information possible when choosing if an audio baby monitor is right for your family.