Video baby monitors have the ability to both watch and listen whilst your little one is in the other room and then feed that data to either a dedicated parent unit or, depending on your device, to an app on your phone.

This fantastic technology has given parents peace of mind and a sense of security that they can check on their baby at any time to see how they are getting on.

However, you may have heard that video baby monitors have a risk of being hacked, and that same camera and audio system that keeps your baby safe can be exploited for nefarious reasons.

Here’s If Video Baby Monitors can Be Hacked: 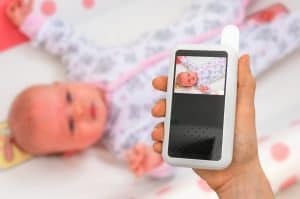 Can Video Baby Monitors Be Hacked?

Video baby monitors can be exploited due to their reliance on WiFi to transmit data, such as camera and audio feeds.

Most video baby monitors offer some type of protection against hackers in the way of data encryption.

Additionally, parents can take extra measures to prevent hackers from gaining access, such as improving network security on their router.

Why Does My Video Baby Monitor Sound Like It’s Being Hacked?

The paranoia surrounding video baby monitors and their potential to be hacked is very real.

Parents will naturally worry if there is a sense that a product they own could harm their family in any way, and as such, strange noises coming from a video baby monitor may prompt fears that a hack is occurring.

However, with the exception of hearing someone speaking over your baby monitor, the noises are very likely due to the constraints of the products.

Strange Noises That Are Mistaken For Hacking

Video baby monitors need to be placed at the right distance in order to prevent odd noises. Here are two ways in which your baby monitor may make noises that could be mistaken as a hack:

There are reports that some video baby monitors make clicking sounds.

These unusual sparks or clicks are usually due to the movement of the lens or the night vision mode becoming active.

We have all heard these horror stories in the past few years of parents finding out that their child’s baby monitor has been hacked without them even realizing it.

Thankfully, because this type of crime has come to light, most reputable baby monitor brands have now implemented extra security measures.

Yet understanding why an individual would want to hack into a baby monitor is still hard for some of us to fathom.

Below are the main reasons as to why someone would want to encroach on your privacy in this manner.

Although hearing the voice of a stranger in the middle of the night through your baby monitor is incredibly alarming there are unfortunately individuals out there that will find it a joy to do.

A person who conducts this type of prank may send threats or other obscenities.

Another reason that an individual would hack a video baby monitor is to literally just watch.

As creepy as it may seem, some people bizarrely find pleasure in spying on the lives of other people.

It is incredibly invasive, but the chances of this happening are so small that you needn’t overly worry.

As smart technology is implemented into our homes, privacy vulnerabilities are increasing; each device is a potential access point to our personal data.

It’s worth noting how rare and unfortunate it would be if it were to happen to you, but it’s helpful to be aware of the risks.

All this said, it is still incredibly rare, so don’t panic.

Are There Any Reports Of Video Baby Monitors Being Hacked?

Although it is rare, there have indeed been reports of video baby monitors being hacked. Including big brand names such as Owlet and iBaby.

The iBaby came under particular scrutiny when:

“a cybersecurity company found vulnerabilities in its M6S model”

However, since that report, iBaby has fixed the bug.

As more and more people become aware of the security risks of video baby monitors that are connected to WiFi, more improvements are made to deter would-be hackers from gaining access.

Read our blog here about how do wi-di baby monitors work?

Can You Check If A Video Baby Monitor Is Being Hacked?

If there is a potential that your video baby monitor can be hacked, you may want to know if you can spot it if it does indeed happen.

There are of course some tell-tell signs that could indicate your unit has been targetted, but it is important not to jump to any conclusions.

Can You Protect A Video Baby Monitor From Hackers?

Although most video baby monitors have systems in place to prevent hacking from occurring, there are some additional steps you can take to make your baby monitor even more secure.

Use these tips to protect your video baby monitor from being targetted by a hacker:

If you are purchasing a video baby monitor you should most definitely be checking how it protects your video feed.

There are many video baby monitors on the market and they offer a range of protection by using a variety of different technologies.

Best Forms Of Protection For Your Video Baby Monitor

Can Video Baby Monitors Be Hacked When Not On Wifi?

Unfortunately, there are no proven methods to make any baby monitor 100% secure.

Some video baby monitors work both on and off the WiFi, but they are vulnerable to privacy intrusion regardless.

However, if you are using a video baby monitor with encryption technology and other security measures, the chances of being hacked are dramatically reduced.

Check this blog about do baby monitors need wi-fi to work?