Being a parent is full of a thousand different worries and considerations, especially if it’s your first time.

As such, it should come as no surprise that baby monitors these days come with many additional features they never used to have, such as the ability to track your baby’s breathing and let you know if anything is off.

But if you’re a confused new parent just trying to make the best decisions for your expected child, you may wonder how necessary such a feature is, or if it even works, so let’s take a look together. 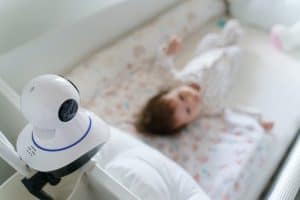 When you think about it that way, it makes sense that as the technology advances, some manufacturers might start adding features that automate this function, so you don’t have to be consciously listening to be alerted if your baby’s breathing stops for some reason.

Certainly not all modern baby monitors will do this, but some specific models are very much capable of automated breathing monitoring.

They may not be perfect or always 100% accurate, but the technology exists for an A.I. to observe abdominal contractions and the sound of breathing and use this data to determine whether or not your baby is, in fact, currently breathing.

Do People Generally Use Baby Monitors that Track Breathing?

Some people certainly do! But definitely not all. As with any other extra feature, it’s a matter of personal choice whether you decide that you need it in your parenting journey or not.

As such, some parents—particularly those worried about the chance of Sudden Infant Death Syndrome, or SIDS—value the ability of a baby monitor to let them know if their child ever stops breathing for any reason.

Other parents may not worry as much about this and may not need a breath-tracking feature.

If you keep your baby in a separate bedroom, there’s a greater risk of not noticing if your baby’s breathing were to be interrupted, and having a monitor to track it for you could be helpful.

If you spend most of your time either in close proximity to your baby or always listening to an audio monitor, you’re much more likely to notice any breathing concerns yourself and may not need an automated system to do it for you.

Check out our other blog here about why are baby monitors so expensive?

Further, it’s worth noting that SIDS is of greatest concern to infants under 1 year of age (especially between the 2nd and 4th months of life), so once your child is over a year old, careful breathing monitoring may be less necessary.

Please also note that we cannot give medical advice; if you are concerned about SIDS or any other medical concern, please consult a healthcare professional.

You can also read more about this issue on the Mayo Clinic page, but please note that this resource is not a substitute for your doctor’s advice either.

Finally, it’s worth noting that breathing monitors are just plain expensive compared to more standard baby monitors, and the cost definitely affects how many parents choose to use them.

Yes, some modern baby monitors really can detect a baby’s breathing, however, it is important to note that 100% accuracy cannot be guaranteed.

Most breath-tracking monitors will determine whether your baby is breathing or not by observing abdominal movement, the sound of breathing, or some combination of both.

It is impossible for current technology to be completely accurate all of the time, however.

This means that most breathing monitors on the market may be slightly under-sensitive or over-sensitive, depending on the model.

Under-sensitive breathing monitors may fail to notify you at times if your child stops breathing.

Over-sensitive breathing monitors, by contrast, may cause false alarms and notify you even when everything is actually fine.

If you’re particularly worried, an over-sensitive monitor will probably be more useful than an under-sensitive one, as false alarms—while annoying—are better than no alarm when something actually is wrong.

Can You Hear a Baby Breathing Over a Baby Monitor?

Absolutely! As we already mentioned, the first baby monitors on the market existed primarily to let you listen to your baby’s breathing, as well as hear when they cry out for attention.

Audio fidelity has only improved since then, so modern audio monitors will let you hear your baby’s breathing even more clearly than they used to.

Notably, the human ear is going to be a better monitor of breathing than any electronic device; as long as you’re actively listening, you’ll notice if the breathing stops, whereas the accuracy of a machine is limited.

Ultimately, this means that the best use for a breathing monitor is during times when you won’t be able to manually listen to breathing, such as when you’re asleep or out of the house (but never leave your child home alone).

So if you are concerned about your child’s breathing for any reason, listen actively whenever you’re able to do so, and use breathing monitors—if at all—whenever you’re not able to pay active attention.

Check out this blog here about 12 places not to place baby monitors.

What Are the Best Baby Monitors that Track Breathing?

If you do decide that a baby breathing monitor is something you’d like to use, take a look at this handy list to help you pick a model:

This is just a small selection of the many breathing monitors available on the market; take a look at this list for some more suggestions, and happy parenting!