HelloBaby baby monitors provide parents the ability to leave their little ones unattended in another room, and yet, also allow parents to keep a watchful ear and eye on them.

Camera and audio technology help ensure that parents do not miss a thing. However, there have been reports and rumors that some baby monitors can be hacked.

Here’s If HelloBaby Baby Monitors Can Be Hacked: 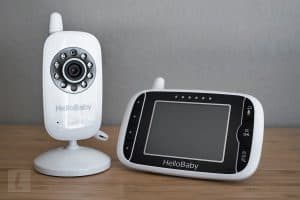 Can HelloBaby Baby Monitors Be Hacked?

Most baby monitors are capable of being hacked however, there are certain models that are easier to hack than others. Monitors that use radio frequencies as the main way to transmit can’t be hacked easily. Some baby monitors have strong encryption protocols just like HelloBaby:

Why Does My HelloBaby Baby Monitor Sound Like It’s Being Hacked?

It is very unlikely that your HelloBaby can be hacked or would be hacked. However, some users have falsely believed that their HelloBaby baby monitor has been hacked because they have heard strange audio signals.

Understandably, due to the rise in concern over privacy and hacking, it’s unsurprising that parents will become concerned if anything out of the ordinary crops up while they are using their baby monitor.

HelloBaby monitors do sometimes make sounds that could lead you to believe that your device is being hacked. These sounds include:

These unusual audio issues are not causes for concern.

Moreover, there are simple reasons why they happen.

Reasons Why Your HelloBaby Monitor Sounds Like It’s Been Hacked

Read this blog of ours about how do non-wi-fi baby monitors work?

As you well may know, if the internet connection on a WiFi-enabled baby monitor, or any other device for that matter, is not secure it means hackers are able to gain access to the network – invading the privacy of a family home.

If someone wanting to hack a radio baby monitor is in close enough proximity, they too will be able to breach the privacy of the home.

As horrific as this is, there are three main reasons why someone would want to hack a baby monitor, and they are as follows.

Of all people to hack baby monitors, this type is probably the least of your concerns. Be it bored children, drunken teenagers, or lonely adults, some people out there will actually get a kick out of scaring the parents of newborns.

It’s not unheard of for kids to prank-call random houses on a Friday night, and as pranks go, hacking a baby monitor of a new parent is probably one of the nastiest.

Next on the list would be those who are into voyeurism.

This type of person would hack a baby monitor to simply spy on, or watch a family, purely just for the sake of it – reality TV doesn’t always cut it for some!

As terribly creepy as this is, it isn’t necessarily one that would bring too much harm to the family.

Probably the most frightening reason someone would hack a baby monitor is to perform some type of criminal activity.

Burglars can use baby monitors to check in on a family and see whether the house is vacated, and if they happen to spy enough times undetected, they will be able to gauge the best time to successfully break-in.

Cybercriminals, once they have gained access to your home network, have the ability to potentially steal financial, or otherwise personal data, from other devices connected to the same internet.

This could mean data such as passwords on your phone, email, or PIN numbers for your bank cards/banking apps.

Sadly there have been cases of identity theft due to this exact reason, but luckily, our preventative knowledge is increasing daily- so try not to get too paranoid!

Are There Any Reports Of HelloBaby Baby Monitors Being Hacked?

However, there are currently no reports of HelloBaby baby monitors being hacked.

Can You Check If A Baby Monitor Is Being Hacked?

Although it is extremely unlikely that your baby monitor will be hacked, it’s always worth knowing the tell-tale signs that may signal that a hacker has indeed gained control over your device.

Can You Protect A HelloBaby Baby Monitor From Hackers?

When it comes to your HelloBaby baby monitor there’s not really any additional steps you need to take in order to protect it from hackers.

In fact, there’s some good news – HelloBaby baby monitors use what’s called FHSS to protect your baby monitor from hackers.

What’s FHSS & How Does it Protect My HelloBaby Baby Monitor From Hackers?

FHSS stands for frequency hopping spread spectrum and this technology helps ensure that your 2.4Ghz signal isn’t interfered with.

The researchers from TechTarget noted that:

“In most systems, the transmitter will hop to a new frequency more than twice per second.”

Data encryption can give parents that extra sense of peace of mind that their HelloBaby baby monitor would make life very difficult for a hacker.

Can HelloBaby Baby Monitors Be Hacked When Not On Wifi

They do not have any WiFi technology and are therefore not vulnerable to hacking via this method.

Unfortunately, even with the enhancements to security and reliability HelloBaby have established, there is no way to say their monitors are 100% secure from hackers.

It would take sophisticated technology, but hackers could potentially follow the channels that the monitor switches to. However, it would be a tremendous amount of work and effort. A hacker will likely pick an easier target than waste their time trying to hack a HelloBaby baby monitor.

Read this blog about 12 places NOT to place your baby monitor.