HelloBaby is a popular brand of non-WiFi baby monitors in both video and audio-only models.

If you’re a new parent browsing the different options of baby monitors on the market, you doubtless have a few questions to answer before making this important purchase.

Chief among most consumers’ questions about any new battery-powered device they may be considering is: how long will the battery last on a full charge?

If you’re wondering the same thing about HelloBaby monitors, then keep reading, because we’re going to answer that and other battery-related questions today.

HelloBaby makes both audio-only and video baby monitors, both without internet connectivity (non-WiFi). The audio monitors are powered via a wall outlet, and the video monitors are battery-powered with an average battery life of 8 hours depending on model and use. 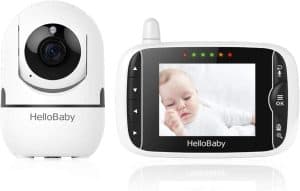 What Baby Monitors from Hello Baby Have the Longest Battery Life?

Of the two, only one is primarily battery-powered: the video monitors.

HelloBaby does state that the parent/receiver unit for the audio monitor line can be battery-operated, but does not state how long the battery life of this unit is.

So ultimately, asking which HelloBaby monitor has the longest battery life is not a useful question; all the video monitors last about the same amount of time.

Further, we were unable to find any information about how long the audio receiver/parent unit can last on a full charge, but it’s a strong possibility it lasts much longer than 8 hours because it does not need to receive or display videos.

How Long Do Batteries Typically Last on Hello Baby Monitors?

On a full charge, the batteries for HelloBaby video monitors will last about 8 hours.

To compare this to other options on the market, it’s worth noting that there can be a wide variance between the battery lives of different kinds of baby monitors on the market.

Baby monitors can have anywhere from 8 to 48 hours of battery life on average.

The reason this gap is so wide is that the simplest technology usually draws less power, and you can get comparatively “low-tech” audio-only radio monitors that will last a long time.

Recording, transmitting, and receiving a video feed takes far more power, which is why video monitors tend to have shorter battery lives.

However, most video baby monitors last at least 10 hours on a full charge, so HelloBaby’s 8-hour battery life is poor even when compared to other wireless video monitors.

There are a few things you can do to squeeze as much extra battery life from your device as possible.

Keep the volume setting on low when watching/listening to your baby through the receiver unit, as the higher volume will drain the battery faster.

For that matter, keep the screen on the receiver turned off when you don’t actually need it to conserve power.

Further, stay within the operating range of 1,000 feet when using the monitor. The closer you keep the monitor and receiver units, the longer the battery is likely to last.

Finally, HelloBaby monitors have many additional features such as lullabies, temperature warnings, and so on.

To get the longest battery life out of your unit, do not use any additional features you do not need; the more you ask the unit to do, the more power it will need to consume to do it.

How Do I Know if my Hello Baby Monitor Is Fully Charged?

The receiver/parent unit screen includes a battery level display that shows you how much charge remains in the built-in battery.

You will know your unit is fully charged when the battery bar on the screen is full.

Can Hello Baby Monitors Work While Plugged In?

As far as we can tell, you should be able to use the HelloBaby video receiver unit while it is plugged in and charging, you just won’t be able to move away from the wall outlet it’s plugged into, without unplugging it.

If you’re sitting in one place and the receiver indicates the battery is low, you should be able to continue whatever stationary activity you were doing while allowing the unit to charge and still check on your baby as needed.

Read our blog here about the battery life of BT baby monitors.

How Long Does it Take to Charge Baby Motitors from Hello Baby?

HelloBaby recommends fully charging the unit for 12 hours before first-time use.

It is not clear if every subsequent charge will require 12 hours of charging, but at least before you turn it on for the first time, it’s recommended you follow this instruction.

Based on this excerpt from the manual, it would seem HelloBaby does in fact expect you to charge your device for 12 hours every single time the battery is low.

Considering the battery only lasts about 8 hours, this is a fairly inefficient charge-time-to-battery-life ratio, and potentially a major downside to the product.

However, you may still be able to get good use out of the product by charging it whenever you are not using it so that it is always fully charged when you need it.

Still, an 8-hour battery life and 12-hour charge time leave much to be desired, and there are video baby monitor models out there from other brands with much longer battery lives and shorter charge times.

Note the “built-in” part of that description; HelloBaby does not make it easy to remove or replace their batteries, likely preferring that you instead simply purchase a new model if the batteries are failing.

Can You Replace the Batteries on Baby Monitors from Hello Baby?

While it may be theoretically possible for a third-party electronics specialist to replace the batteries, their built-in nature prevents the casual user from accessing or replacing them.

HelloBaby seems to take the stance that their batteries should not need to be replaced within the typical lifetime of their products, and prevent you from easily doing so yourself by building them into the monitor.

HelloBaby does not offer a timetable on when to replace the batteries, because they have not made their batteries easy or even possible for the average household consumer to access or replace.

That being said, user reviews do not commonly report complaints about failing batteries, so it may be the case that the battery will function reliably for at least as long as you need to use the monitor.

Still, it can be frustrating when manufacturers hide their batteries in difficult-to-access spots to effectively force you to use their repair services or simply purchase a new unit if the battery fails.

Do Hello Baby Monitors Always Beep When the Battery Is Low?

Despite reading through the user manual, we were unable to determine if the model will beep when the battery is low, or not.

The only mentions of “beep” in the manual refer to the temperature alarm and custom alarm features.

Further, none of the mentions of the word “battery” in the manual specifically refer to a beeping alarm when the battery is low.

As near as we can tell, the unit will alert you in some fashion when the battery is low, but the specifics are not clear and this important information is simply missing from the manual.

The receiver unit does show you, at all times when the screen is turned on, how much charge remains in the batteries.

However, without an alarm of some kind to remind you when it’s time to plug it in, you may have to be actively watching the display to even notice.

Read our blog here about the battery life on Oricom baby monitors.