Having a center stand is the most convenient option for setting up your smart TV.

You do not need to drill holes on the wall for a wall mount or have to guess the right size mount for your TV.

Some center stands can also function as a ledge to put your external hard drive on when you mount your TV to the wall.

Besides, all smart TVs come with their center stand, so that’s one less item to buy!

Let’s talk about the best Smart TVs with Center Stands! 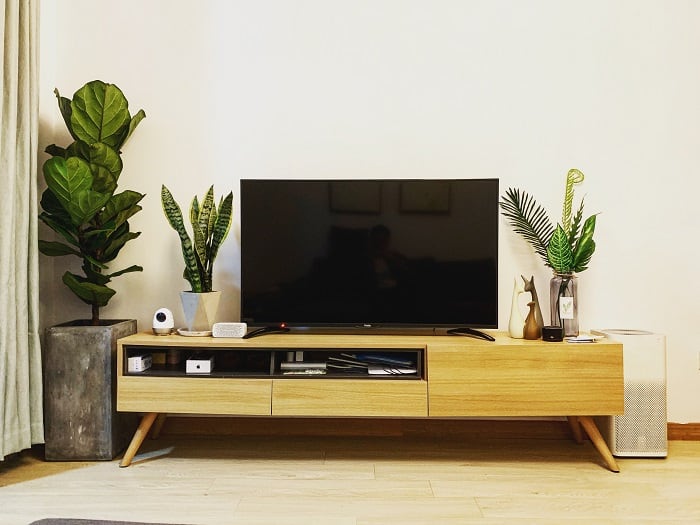 Criteria for Choosing a Smart TV with a Center Stand

To help you in choosing the best smart TV, we chose five different brands that offered center stands and featured the higher tier of display technology.

All the smart TVs listed here have a screen size of 55 inches, which can be a challenge to balance in the center due to the massive dimensions:

The LG OLED B9 has two (2) wedge-like center stands that look a bit chunky.

While the front part of the stand is thinner and wider, the design of the back part is not exactly as pleasing, given its thickness.

However, the design compensates and helps balance this 55-inch device, which usually needs a pair of legs to balance correctly. This should not be a problem, though, since it is hidden from plain sight.

Other than that, the B9 beats other higher-priced smart TVs when it comes to performance!

As an OLED screen, the B9 produces better blacks, even beating the A8G by Sony, which has a higher price.

The audio output jack of the B9 is not just for headphones but can drive other speaker systems, making it perfect if you prefer a wired connection for your sound system.

After all, LG was one of the first companies to use OLED for smart TVs, which sets higher expectations from them when it comes to picture quality.

For its price, you get a robust center stand and crisp images.

While it does not have the best looking stand, it still does the job well with great stability!

The OLED 55 is the latest addition of Vizio in its product line.

Announced in early 2020, this is Vizio’s first foray into OLED technology for smart TVs.

The good thing about the center stand of the OLED 55 is its clean design.

The well-designed stand gives it a premium feel, while the kickstand at the back is not obtrusive, and stows away with ease if you decide to switch to wall-mount.

That is one less item to worry about if you need to remove the center stand.

As a 55-inch 4K screen smart TV, you will enjoy this unit as your daily screen.

It has the trademark features of Vizio, including a cloud-based ecosystem, which needs less updating on your end.

The nice thing about the center stand of the Sony A8G is the clean and more minimalistic design.

In fact, if it had a better price, this TV would be a top contender!

As compared to other picks for smart TVs in this article, the A8G utilizes design as if the stands are positioned on each end, gives it more stability, despite the minimalist look.

To support the design, the legs are connected through the back, forming the center stand.

When it comes to other features of the smart TV, this is where other smart TVs in this article outshine the A8G.

When it comes to picture quality, the A8G performs above decent levels but does not have the best blacks, as compared to other OLED smart TVs.

What it lacks in color, the A8G makes up for viewing angles.

For context, viewing angles matter if you are using a center stand as you have limited angling abilities, as compared to using wall-mounts that have articulated joints that let you adjust your TV to your ideal angle.

That said, the A8G has the best viewing angles among the smart TVs listed in this article.

It is also worth noting that the motion lag on this TV is not up to par with other TVs.

That can be a big letdown considering this is the most expensive TV in our selection.

That means, if you are very particular over gaming performance or keystrokes and how they reflect on your TV, then this is not for you.

It also consumes the most power in comparison to the other smart TVs listed in this article.

For what its worth, with the cost of this TV, it feels like you are paying more for the aesthetics or physical design of the A8G, and a little more.

That said, if you want a smart TV that matches your minimalist theme in your office or home, then the A8G should be your pick.

The Samsung Q80T 55-inch smart TV has the most traditional looking design for its center stand among other TVs in this article.

But don’t let that “most traditional” look fool you.

When you look at the TV at another angle, you will notice it does have this sleek aesthetic to it.

If Sony has the best-designed center-stand, Samsung comes in at a close second.

It is worth noting that this center stand occupies the least amount of space on the ground.

That makes it ideal if you need to put it on a space with limited real estate.

As long as it does the job in keeping the TV firm and in place, then the design of the center stand should not be an issue.

Moving on to the other features of this TV, it is worth noting that the Q80T is the only smart TV in this article that uses QLED.

That should not be a deal-breaker as the Q80T still produces decent images, but not at par with its OLED counterparts.

Among the smart TVs listed here, the Q80T has the loudest speakers.

Unless you are picky with the sound quality of your smart TV, you won’t need to pair this with an external speaker, as it is capable of 80 watts of power through its speakers.

Another weak point of the Q80T is its viewing angles.

As mentioned earlier, viewing angles matter due to the limitations you may encounter in fixing the angle of your TV.

Given that consideration, the viewing angle of the Q80T is one of its weak points.

Why Isn’t the Q80T the Budget Pick?

The Q80T does not have the more powerful chipsets, as compared to Vizio OLED, which is already considered as the top-tier of the brand and uses more powerful components for its price.

That means you can expect better playback, a more responsive interface, and user experience with the Vizio OLED.

However, if you are brand conscious and want a smart TV with a center stand and premium feel, then this is for you.

If there would be an honorable mention for the best smart TV with a center stand, the Samsung Q90T is the hands-down winner.

When it comes to its center stand, Samsung paid extra attention to the design of the Q90T, which has very minimalist aesthetics.

The curved form factor gives the Q90T a premium feel, making it pleasing to the eyes.

If you are after a minimalist or curve-oriented furnishing for your room, the Q90T fits just right.

The Q90T performs at par with the LG B9, with its crisp images, thanks to HDR.

The surprising part about it is, it only uses an LED screen, unlike the cheaper Q80T, which comes with QLED on board.

In this case, the non-QLED screen performs almost at par with an OLED TV.

While the viewing angle is not at par with the LG, the Q80T still performs better than the Q90T.

These are a tiny sample of smart TVs available in the market today that have center stands.

Use the selection listed above to help you decide on the kind of center stand you want on your TV.

There are many other designs available that may also fancy you, whether you prefer function to fashion.

What’s important is it can support your TV at the ideal viewing angles.

And if these are still not satisfactory, you can also check third-party center stands, which let you prop up your smart TV on your console using the slots meant for wall brackets.

Most importantly, you should be able to enjoy the smart TV you buy, and hopefully last you in the coming years.