If you’ve ever wondered why cables for Ethernet networks are so much shorter than the ones for, say, USB, it’s because a long cable can actually cause problems.

Your connection speed and overall performance will suffer if you use an Ethernet cable that’s too long.

That’s because longer cables can introduce signal interference between devices, which can cause dropped packets, increased latency, and loss of data.

In this blog, we’ll talk about Ethernet cable lengths and all the aspects that go into that.

Here’s If Ethernet Cable Can Be Too Long:

The length of your cable should be limited to 100 meters or less in most cases. However, if you have a particularly large building or complex network configuration, you may need to go up to 500 meters or higher depending on the type of cable used and the number of repeaters used along the route. 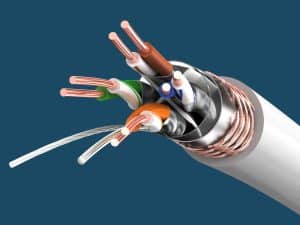 Ethernet cables are made to standard specifications, and there are many different types of Ethernet cable available. For example, Category 5e and Category 6 cables are the most common. These types of cable have different attenuation (signal loss) characteristics at different frequencies.

However, when it’s traveling down an Ethernet cable at 100 Mbps or 1000 Mbps (Gigabit), it’s going to be slower than the speed of light in a vacuum.

This is because there are physical limitations built into each type of cable — particularly twisted pair. It’s also important to note that all copper wire has resistance, so the longer the distance between two points, the more resistance that signal must overcome on its journey from one end to another.

The distance can be measured in feet or meters; however, for this discussion we will use feet as our unit of measurement — even though most cables are sold by the meter these days.

The following will show how much speed will be lost at what lengths:

How Long Is Too Long for an Ethernet Cable?

Ethernet cables can be too long for your network — and it’s not just about the cost of buying them.

It’s a fact that longer cable runs can cause “attenuation” or signal loss, which can degrade network performance.

This means you might see slower data speeds, dropped connections, and higher latency in general. In other words, there are serious problems that can occur if you’re using a cable that’s too long.

You may have heard that Ethernet cables should be no longer than 100 feet (30 meters). This is because they use electrical signals to send data between two devices (like a computer and a router).

The length of an Ethernet cable has an effect on how strong those signals are.

If you’re using a shorter cable, then the signal will be stronger than if you were using a longer one.

The length of an Ethernet cable affects its performance in two ways.

How Do You Successfully Extend Ethernet Cables Over a Long Distance?

The first thing you need to do is check the length of your current Ethernet cable.

If it’s too short, then you’ll need to buy another one that’s longer than what you have now.

Make sure that you buy one with enough bandwidth so that it can handle both uploads and downloads at the same time without slowing down your connection speed too much.

Next, find out what type of connector is on each end of the new Ethernet cable because this will determine which kind of connectors you’ll need on both ends in order for everything to work properly together.

Most modern devices use RJ-45 connectors, which look like little plugs with eight pins inside them (four on each side).

What Is the Best Ethernet Cable Type for a Long Distance?

Fiber optic cables have several advantages over other types of cables.

They’re immune to electromagnetic interference (EMI), so they don’t create static or interfere with radio signals like some other types of cables can.

They’re also thinner and more flexible than copper cables and less susceptible to interference from other electronics in your home or office, making them ideal for crowded spaces like offices and homes where you may have multiple devices running on different frequencies all competing for bandwidth at once.

And because they don’t conduct electricity, they’re safe and easy to install in any room without fear of electric shock or fire hazard.

The biggest disadvantage of fiber optic cables is their price tag.

While fiber optic networking can be cheaper than traditional networking over time thanks to its higher bandwidth capabilities and lower maintenance needs, it’s still much more expensive upfront than most other options for extending Ethernet networks over long distances.

Read our blog here about is it better to unplug than switch off?

How Does a 100 Ft. Ethernet Cable Affect the Signal Quality?

The answer is: not much.

The rule of thumb is that every 10 feet of cable adds one decibel (dB) of noise to the signal being transmitted over it.

So if you’re running 100 feet of cable through your house or office, there will be 10 dB worth of noise added to your signal at each end.

When it comes to Ethernet cables, there are two main types: patch cords and crossover cables. Both can be used for a variety of applications, but each has their own strengths and weaknesses.

Here’s what you need to know about each type:

Can a Huge Coiled Ethernet Cable Cause Trouble?

The length of your Ethernet cable can definitely cause problems. If you’re using a long cable that’s coiled up, it can create some serious issues.

The first issue is that the coiled up nature of the cable will cause resistance to the flow of data, which slows down your connection and makes it less reliable. The longer the distance between two devices, the more resistance there will be and the worse this issue gets.

The second issue is that if you have a device that’s plugged into an electrical outlet, that outlet is going to have a limited amount of energy available to it before it runs out. That means if you have multiple devices plugged in behind each other on a long Ethernet cable, some may end up getting less power than others if they’re further away from the outlet!

What Happens If an Ethernet Cable Is Too Long?

In the world of networking, long distances can create lag, delay, and quality issues. If you’re playing a game online and there’s a lag between your movement and the video feed, it can be frustrating.

The longer the cable, the more likely you are to experience these issues. So why do we use such long cables in our offices?

Because it’s cheaper to do so.

When you have a store with hundreds or thousands of feet of cable between a switch and server closet, it’s tempting to just buy one big spool of wire and run it all the way down the hall, rather than spend money on several smaller spools. But this can cause problems if you want to add new equipment or expand your network later on.

It also makes management more difficult because it means having one giant cable running from end to end that needs to be taken care of as a single unit (i.e., if one part fails, you have no easy way of replacing just that section).

If you have a lot of equipment spread out over many rooms or floors, consider using shorter cables for each device instead of one giant spool for everything at once.

Is a Wi-Fi Signal Better Than a Really Long Ethernet Cable?

Have you ever wondered if you should replace your Ethernet cable with a Wi-Fi connection? Sure, a long Ethernet cable can be convenient, but it’s also bulky and cumbersome.

If you want to get rid of all those wires, then maybe it’s time to consider wireless connectivity.

Why Should I Use Wi-Fi?

There are many reasons why you might want to use Wi-Fi instead of Ethernet:

Read our blog here about should you unplug your computer when not in use?