Extension cords and power strips give us the convenience to get our devices plugged in where we want them to be and with the other devices that need to be in close proximity to them.

These handy electronics are commonplace in most households, but when it comes to student dorms there are some rules and regulations that may mean you need to think twice before packing them in with the new college books.

Here’s If Extension Cords & Power Strips Are Allowed In Dorms:

Student dorms have different rules regarding extension cords and power strips. Many dorms will explicitly state that these items are prohibited in dorm rooms. The reason for this is that they pose a fire risk with improper use. 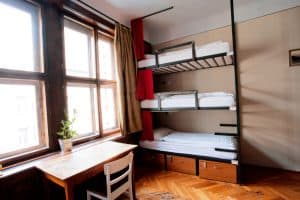 If a student uses an extension cord or power strip and it violates the dorm’s policies then the student in question may be reprimanded with a fine, or worse, be evicted.

When it comes to the perfect student setup it’s easy to imagine that the budding scholar will need their laptop computer, printer, lamps, speakers, and all manner of chargers plugged in and ready to go.

Extension cords can provide the ability to get devices plugged in all around their dorm; making the most out of the few power outlets they have and providing them with the option of where they want particular devices within the room.

However, it is important to note that different colleges have different rules concerning using these handy electrical items.

As Education.com points out:

“(…) many colleges prohibit cords altogether, while others won’t allow them unless they’re surge protected, as unprotected cords can overwhelm a dorm’s electrical system and cause electrical failure or other dangers.”

These differing rules in regard to using extension cords mean that it is especially prudent to contact your particular college or university to check their current guidelines.

Take a look at the student housing website specific to you or your child’s college or university and you should find the details of all rules that need to be adhered to once they move in.

If you cannot find the information you are looking for then we’d suggest calling up the relevant advisor for the dorm and asking them directly if extension cords are accepted for use in that particular dorm.

Failure to abide by dorm rules could cause trouble for the student in question later down the line.

What Happens If You Use Extension Cords When Prohibited?

Each university and college will enforce their dormitory rules and punish those who break them in slightly different ways, however, in general, there are some common procedures to keep in mind.

Due to the fact that these inspections take place at a time and choosing of the housing staff, it is important that the student understands what is, and what is not, allowed in their dorm room.

Having an extension cord in a dorm room could seem like a minor misdemeanor, but it depends on the exact policies that the dorm and housing staff have put into place.

Repeated violations and disregard for the rules that have been set out in those policies can lead to some serious consequences such as losing the accommodation.

If extension cords are prohibited in your particular dorm then there may be a good reason for it and, due to the trouble it can cause to disregard the rules, it’s well worth following them.

Why Are Extension Cords Prohibited In Some Dormitories?

So with all these tough rules surrounding the use of extension cords in dorm rooms, you may have started to wonder what’s the big concern.

What might be seen as unnecessarily draconian, could in actual fact, be ensuring that your dorm is a safe place to live.

To understand why there are rules around having extension cords in dorm rooms it is essential that you know what the risks are:

As you can see there are quite a few precautions that individuals need to adhere to in order to use an extension cord safely.

It’s fair to say that not every student will be armed with the information above, and let’s face it, when there are parties to attend, assignments due, and books to read, is there really any time in the schedule to check how many watts your appliance consumes?

The problem is that if students don’t take the time to use extension cords safely then there is a risk that a fire can break out and it won’t just affect that one student who left a pile of dirty washing over their overloaded extension cord, it will be an issue for everyone living in the building.

This is why many colleges and universities have a blanket rule on banning the use of extension cords.

For these institutions, the risks are too great and the damage that can be done from improper use can be exponentially dangerous.

The reason why your dormitory has prohibited the use of extension cords is not to make life difficult for the student, it’s to protect them, the building, and everyone who lives there.

However, some campuses will allow the use of extension cords, but offer specific guidelines that must be followed by their students. For example, the college of New Hampshire state:

“Extension cords may not be connected in a manner that allows too many appliances to be plugged into the same outlet causing more than 15 amps of power to be drawn.”

If you are in a dorm that does allow the use of extension cords then make sure you are in the know in terms of how to use them safely, but also, ensure you follow the specific guidelines that your dorm has laid out.

Are Extension Cords With Surge Protection Allowed In Dorms?

You now know the reasons why extension cords are prohibited in most college dormitories.

However, certain exceptions can be made when the extension cord is fitted with an inbuilt surge protector.

Extension cords with surge protection can often be confused with power strips, though they are not the same thing.

The difference between the two will be covered in further detail in the next question.

Surge protectors are a very common way of protecting your devices from power surges or spikes.

Extension cords with inbuilt surge protection have the ability to both:

If electronic devices encounter a surge in power, it can result in anything from a minor effect on the speed of its operating system to more serious irreparable damage.

With a laptop, for example, an electrical surge can fry the motherboard meaning it will no longer be able to boot up properly.

Let’s face it, laptops and phones are some of the most invaluable things to take with you when starting out at college, so having the ability to keep them from harm’s way is a definite bonus.

So how do they do it, you may be wondering.

Whether you are allowed this type of extension cord in your dormitory all really depends on your individual college campus rules and regulations, so it is worth being aware of the rules before taking the risk.

Even if your college allows you to use an extension cord because it is equipped with surge protection, it is always worth knowing how to use them properly.

Here are some helpful safety tips when it comes to using extension cords with surge protection:

Read our blog here about are extension cords bad for chargers?

Are Power Strips Allowed In dorms?

As mentioned previously, power strips are often commonly confused with surge protectors due to their similarity in appearance.

They may look very alike, but power strips do not always have the same protective capabilities as surge protectors.

Indeed, some may have inbuilt surge protection, though this is not their sole function.

The primary function of a power strip is to add extra sockets, allowing space for multiple devices to be plugged into just one power outlet.

However useful this is, it does not provide the added safety that surge protectors do.

As to whether a power strip will be allowed in your dorm, it may depend on whether they have inbuilt surge protection.

What Can You Use Instead When Power Strips Are Not Allowed?

If you’ve been wracking your brain trying to come up with an alternative to using power strips then look no further, we have you covered:

Consider the USB Station Your Solution

A Multi Socket Outlet Is Another Great Option

Get Some New Sockets Installed

At the end of the day, if you are really struggling to keep all your devices powered up, plugged in, and ready to go then maybe it’s time to contact an electrician and get some more outlets installed.

Of course, this won’t be a possibility for those of you who are about to move into dorms, but it’s important to know that your dorm room will provide the right amount of outlets, in the right locations, for your needs.

If you don’t feel that the dorm room works for the setup you require then you have two options – find a dorm that does or think about how you can adjust how you connect and power your devices.

Read this blog here about are AC power cords universal?