Facetime is a neat feature that might slow your Wi-Fi down.

While Facetime doesn’t slow down your Wi-Fi connection, it can be a significant drain on your bandwidth.

Depending on how much you use the feature and how much capacity you have, this can cause issues with your internet speed.

Here’s If Facetime Slow Down Wi-Fi:

Facetime can slow down your Wi-Fi. However, most of the time it will use less than most apps or streaming services. Facetime uses only at max speed 5mbs of speed per second which is way less than most modern home modems can provide. The most probable culprit is shared networks between other devices. 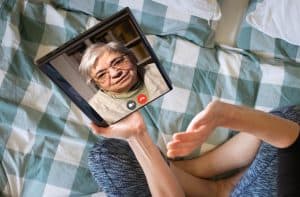 Facetime is a video call and audio call application by Apple. It’s available on all iOS and macOS devices, with the promise of privacy and security because of its end-to-end encryption.

You use Wi-Fi to connect your iPhone, iPad or MacBook to the internet. It enables you to use apps like Facetime for video calling but also other apps such as Facebook, Snapchat, YouTube, and even games like Fortnite and Call of Duty Mobile.

Facetime doesn’t slow down Wi-Fi on its own or when used with other applications or software.

The issue may lie with your wireless router’s hardware specifications – particularly if you have an older model – or interference from another electronic device sharing the same frequency band (2.4GHz and 5GHz).

The main reason your Wi-Fi slows down when you’re on FaceTime is that Wi-Fi is an asymmetrical technology. Internet bandwidth has two components: upload and download.

Your internet connection provides a certain amount of bandwidth for each. When you’re watching a video online, for example, you need more download bandwidth than upload bandwidth.

The video file is being downloaded to your phone from the server where it’s hosted, so it needs to be delivered to you faster in order for it to playback smoothly.

FaceTime is different — both parties are uploading and downloading at the same time. When you’re on FaceTime, the audio and video data from your phone is being uploaded to Apple’s servers, and that signal is then routed back out to your friend’s phone.

Your friend’s audio and video data are also being uploaded to Apple’s servers and routed back down to your phone.

How Come My Wi-Fi Is Slower When Using Facetime?

Facetime can slow down Wi-Fi. This is because the video app uses your Internet connection to send and receive data in real-time. The amount of data being sent back and forth will cause your Wi-Fi speed to suffer.

You should also know that using multiple devices on the same internet connection can make a difference as well. For example, if you have several people at home using their phones and computers, Facetime will temporarily reduce the quality of your Wi-Fi speed.

Read our article about do video games slow down wi-fi?

There are a couple of ways to fix this problem. The first is by resetting both your modem and router at least once per week.

This will clear up any bandwidth issues that might be causing Facetime to run slowly on Wi-Fi.

The other option is upgrading your internet service provider (ISP) so that you have enough bandwidth for all devices in use or consider switching providers altogether (e.g., Verizon Fios vs Comcast Xfinity).

Because FaceTime is Apple’s video calling system, it only works between Apple devices that are on an iMessage network.

The short answer is no: Facetime will not slow down your Wi-Fi. However, just because Facetime itself isn’t a prominent drain on your home internet doesn’t mean that making video calls won’t affect your internet speed at all.

For reference, a 30-minute HD movie stream uses approximately 0.9 gigabytes, so you can see why streaming Netflix has more of an impact on your Wi-Fi than does FaceTiming with friends and family.

However, if you don’t have access to 4G LTE on your phone—or if you’re calling someone who doesn’t—you could be using a lot more data than you think with each call.

In this case, the answer to the question “Does Facetime slow down Wi-Fi speed?” is: Yes, if it’s using up all of your data.

Even though a typical Facetime call only uses about 1 megabyte per minute up and down (and the highest possible quality video call still only uses 6 megabytes), being on the phone for an extended period of time

At the end of the day, you should be concerned with using up as little data as possible, but in my experience, using Facetime on Wi-Fi doesn’t actually speed up your connection.

You can check for Facetime interference with your Wi-Fi by using a fast internet speed test app.

Fast is an app that measures your Wi-Fi speed independently from Apple’s built-in tools, so you know the results more accurately reflect the real data you’re getting.

I recommend doing this on an iPad or other device connected with WiFi since you will be measuring WiFi speeds.

If you have a Mac, use the Xfinity Speed Test to measure your internet connection before and after making a Facetime call.

If there is a significant difference between the two tests, it could be due to interference from Facetime.

How Much Bandwith Does Facetime Use?

This is not the only factor that can affect your bandwidth usage, though. Video quality and resolution are major factors in determining how much bandwidth a Facetime session will use.

For example, if you have an older device with a lower camera resolution, it will use fewer resources to maintain the session than someone with the latest and greatest device.

Another factor is how much bandwidth your service provider gives you, or what type of plan you have with them.

The type of plan that you have with your carrier or ISP will affect the amount of data that gets transferred over the network.

It all boils down to how much data it takes to transmit a certain amount of information from one place to another over a given period of time.

Can You Stop Facetime From Interfering With Your Wi-Fi?

There are some things you can do to maximize your use of FaceTime while minimizing the impact on your Wi-Fi:

While Facetime will always use up some bandwidth as long as it is active, it should not slow down your Wi-Fi connection beyond the norm—but I would advise that if you’re streaming video, watching Netflix, etc., it’s probably a good idea to dial down the quality.

Of course, some can argue that the real culprit of your slow Wi-Fi is elsewhere in your home.

It’s likely worth troubleshooting a few key spots around your house, but hopefully this article was helpful in determining at least one potential cause of an issue.

Read another of our blogs about does Google  Nest slow down WiFi?