You’ve probably had the experience before of getting back from work or school and sitting down to check your social media, play a video game, watch a video, or some other use of the internet only to find said internet has slowed to a crawl in the evening hours.

Needless to say, this can be pretty frustrating, especially after a long, hard day when you just want to relax and unwind.

With that in mind, today we’re going to take a look at this phenomenon and try to determine if your Internet Service Provider, or ISP, could be responsible.

And if so, what if anything you can do about it? 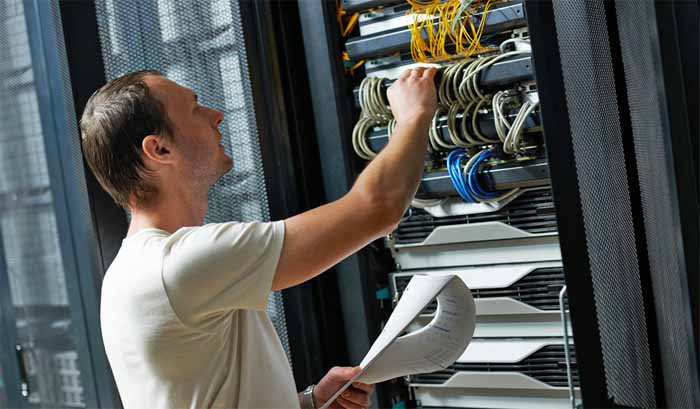 How Come my Wi-Fi Is Slower at Night?

Before assuming your ISP is responsible, it’s worth considering whether the slower speed you’re experiencing could be because you’re trying to use the internet during peak hours.

These hours tend to occur because they represent the period during which most people are done with school and/or work for the day and all seek to stream, watch, game, and so on during the same after-work/school hours.

Needless to say, everyone trying to do these things at the same time means there’s less bandwidth to go around, and slower speeds may be experienced.

That being said, while your fellow internet users are usually the more likely culprit, it’s not impossible that your ISP could be slowing your connection. Let’s take a look at that possibility in the next section.

In a word: yes, yes they can. Your ISP can do what’s called “throttling” your connection, which means placing an artificial limit on how much data you can use at any given time.

Before you get too worried, though, you should know that the average internet user is not likely to experience throttling and whether you do or not depends on a few things.

ISPs tend to only throttle what they consider “heavy” users. The definition of a heavy user is set by the ISP and varies from one provider to another.

If you’re just trying to check social media and maybe watch a few silly videos before bed, you’re probably not considered a heavy user. On the other hand, if you tend to do a lot of streaming, online gaming, and other activities that require a lot of data, you could be subject to throttling by your ISP.

Notably, ISPs are most likely to throttle connections during peak hours.

That being said, this may not be much consolation if you’re a streamer, gamer, or so on who’s being effectively prevented from enjoying your hobby.

With that in mind, in the next sections, we’ll examine how you can detect throttling, and how you might be able to get around it.

How Do I Check if my Internet Provider Messes with my Wi-Fi Connection?

Throttling isn’t something ISPs tend to advertise or give you any easy ways of finding out whether they’re doing it or not, since they’d generally prefer to keep such tactics hidden from the end-user.

Luckily for you, they can’t stop you from figuring it out with a couple of handy tools at your disposal.

First off, you’ll need a way to test your speed.

Try putting “internet speed test” into your favorite search engine and you’ll be greeted with a host of options. Note that we haven’t personally tested any of them, so as always, use common sense and test at your own risk.

That being said, as long as you exercise due caution, any halfway-decent speed test should do.

Check With a VPN

Next, you’ll require a VPN, a.k.a. virtual private network.

A lot of paid options exist for these, but many also feature free options that should work just fine for testing purposes. Once again, just search for “VPN” with your favorite engine and take your pick from the plethora of options.

If you’re new to VPN’s – know that a VPN might slow down your internet connection. So, if you’re seeing HIGHER speeds when on a VPN, something’s up!

Once you’re armed with your speed test and VPN of choice, you’re ready to use the following steps to find out whether your connection is being throttled or not.

If the results of the test indicate you’re not being throttled, then the slowdown you’re experiencing is probably the result of too many users trying to use the internet at the same time, plain and simple. It’s also worth noting that complications from the ongoing COVID-19 pandemic could also be contributing to your slow-down.

If this is the case, you can potentially get better speeds by changing your habits and avoiding peak hours altogether, using the internet before 6 PM or later than 11 PM.

Of course, this won’t work for everyone’s schedule and there’s a reason peak hours happen when they do.

If slower speeds are preventing you from enjoying your use of the internet, you can also try contacting your ISP’s customer service and asking them to do something about it.

After all, you’re paying for a reliable internet connection, and if you’re not getting it, you have every right to demand a better connection or—that failing—a discount proportionate to the inconvenience you’re experiencing.

But all that said, what if your test concludes that your ISP really is throttling your internet use? Well, fear not, because there is something you can do about that.

Let’s take a look in the next section.

Can You Stop Internet Providers from Interfering with your Wi-Fi?

The good news is that you have several options for avoiding your data being throttled.

From monitoring your monthly usage to avoid being classed as a “heavy” user, to sidestepping the issue altogether with a good VPN, let’s take a look at what you can do.

One method of avoiding throttling is to track how much data you use over a given period of time.

If your plan is “capped,” meaning you’re limited to a certain amount of data per month, then you have a clear upper limit and can periodically check your usage to make sure you don’t reach that limit.

But what if you’re paying for an internet plan that’s supposed to be “unlimited?”

Well, keeping your monthly usage lower could still help you avoid your ISP deciding you’re a “heavy” user and throttling you.

But it’s a bit harder in this case because ISPs generally don’t even tell you that you’re being throttled at all, let alone give you clear guidelines on how to avoid it.

And besides, if you’re paying for an unlimited plan and being throttled anyway, you may wish to exercise your right to “get what you’re paying for” and use as much data as you want. The good news is that there are ways to do this, whether your ISP likes it or not.

Turns out that the same handy tool you used to test whether or not you’re being throttled in the first place can also be used to avoid it happening altogether.

A reliable VPN can let you hide your internet activity from your ISP, and thereby bypass any restrictions they try to place on your data usage.

Most free versions of VPNs are limited, however, and to truly enjoy unlimited internet use in defiance of your ISP’s restrictions, you’ll probably need to sign up for a paid version. This can be worth it for many, but if you’d rather not pay for an additional service just to get your money’s worth out of the internet you’re already paying for, then keep reading.

If you think your test shows pretty conclusively that your internet usage is being throttled while you’re paying for what should be an “unlimited” plan, you can try contacting your ISP’s customer service about this.

There is of course no guarantee you’ll get anywhere with this strategy.

But it could be worth it to point out that you are not getting what you’re paying for and have clear evidence to support this case, and request your ISP stop throttling your data.

Fight for a More Free Internet

If none of the above strategies work for you and you’re still being frustrated by slow internet and throttled speeds, the best thing you can do is support the cause for a more free internet.

Network Neutrality, commonly abbreviated as Net Neutrality, is an ideology that believes ISPs should not be able to charge people differently or place restrictions on users based on what or how much content they use.

ISPs have a financial incentive to want to place more and stricter controls on how people use the internet they provide, so they can charge people accordingly and increase their profits. If you’re frustrated by artificially slow speeds on your favorite internet activities, write your local congressman in support of Net Neutrality, and pay attention to any bills the government introduces on the subject.

This may not help you get faster internet right this second, but supporting this cause is the only way to keep ISPs from getting even worse when it comes to data throttling and other meddlesome practices.

This is why your internet slows down at night.

How to tell if your internet is being throttled.